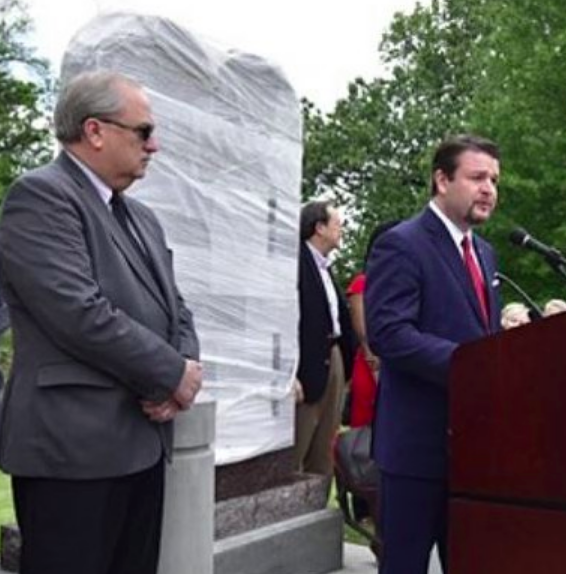 READY FOR ‘WAR’: Sen. Kim Hammer (left) at the unveiling of the 10 commandments monument. Doesn’t it say something about false witness?

Facebook is lit up with comments about a Facebook post by Sen. Kim Hammer of Benton, a Missionary Baptist preacher and hospice pastor, following the impeachment of Donald Trump.

Hammer removed the post after getting hundreds of comments, many critical, reports one of those who replied to him. But she and others saved his words, which follow:

The Democrats have put a stake in the ground today. They have set the tone for the engagement. They have revealed their true colors and their alignments with the likes of a media that is biased, big tech that hides not behind truth but self policing hypocritical policy, and social media that is equivalent to communist-controlled censorship. regardless of the cost and what their true agenda is.

This is not a time for faint of heart or weak knees. It is not a time for self pity and we have no time to waste feeling sorry for ourselves. It is a time to fight and expose them as the enemy of the state they are. The enemies of democracy and the Constitution.

We are to live a life that shows no fear, even though there is much to fear if we lose in 2022. This is a time of self-sacrifice of time, resources, technology and personal cost to oneself that must be committed to the war.

We at the state level will do our part to purge the State of attempts to steal elections in order to make sure that our election process is fair and the will of the people is protected.

For those that revealed themselves to be the enemy from within by betraying party loyalty, you can come in from out in the cold (because the side you helped win really don’t want you they just used you) and exchange your shame for a renewed commitment to help take control of our party’s direction once again and hand the Democrats a humiliating defeat in 2022.

They have no idea the fury that they have caused and it will be up to each state to restore integrity and hope in the heart of the people. Their defeat will be their shame. Their tears will be our joy.

So there is no misunderstanding this is not a call to violence for that should be condemned.

Instead this is a call for all who are tired of the country going in the wrong direction to not be discouraged and quiet. Instead, determine to fight harder than ever before as we prepare to take back ground in 2022.

The person who wrote me commented:

I have worked with the best of chaplains in NW Arkansas. This man is the chaplain for Saline County Hospice! A chaplain’s mission is to comfort all faiths, all beliefs, with no judgment in their ministry. This man says the Bible is a book the Democratic party does not acknowledge. This man is the example of the ongoing hate and division created not only by Trump but by his religious followers who say they are ‘Christian’.

What I’d say is this: The Bible says a lying tongue is an abomination to the Lord.

It is a lie that the election was stolen. It was a free and fair election, found so by dozens of judges and proclaimed so by Republican election officials in state after state.

It is at least close to a lie to invoke communism.

It is a lie to say the winners were enemies of democracy and the Constitution.

It is a lie to say the “Democrat” [sic] Party does not acknowledge the Bible.

A disavowal of violence is as empty rhetorically here as it was coming from Donald Trump, who was reported  to have enjoyed watching the riot he caused with words similar to these used by Hammer:

Enemy of the state

If you don’t believe these can be fighting words, see the insurrection on Jan. 6.

I suspect a search of social media would find other legislators who echo Hammer. All are probably also willing to stand their ground against people in whom they perceive threats.

The Bible also reserves vengeance to the Lord. But I fear vengeance will be a priority in Republican legislative assaults on the remaining Democratic holdouts in Arkansas, each day preceded by a chaplain’s prayer. Wait to see what Hammer and his colleagues have in mind for the “election process,” to name one.