The Arkansas state senate has a resolution for Black History Month and it’s basically a D’Souza rant framed as a series of “WHEREAS” clauses.https://t.co/DHygaZebPL

On a day the Arkansas legislature is debating a bill to punish schools that teach a fuller account of the history of slavery in America comes criticism of another piece of racist legislation. (On top of the new Republican tactic of demonizing the Black vice president.)

Kevin Kruse is a professor of history at Princeton. He’s hell on, among others, those who say the Civil War wasn’t about slavery. His Twitter thread today that began at top includes these continuing observations: 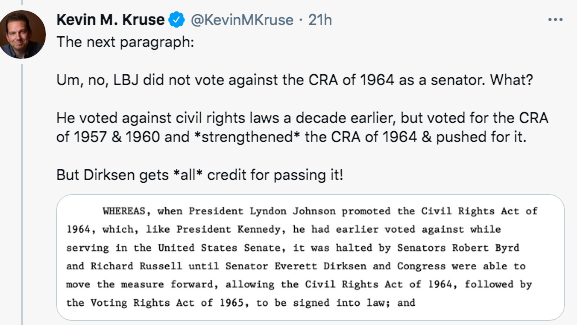 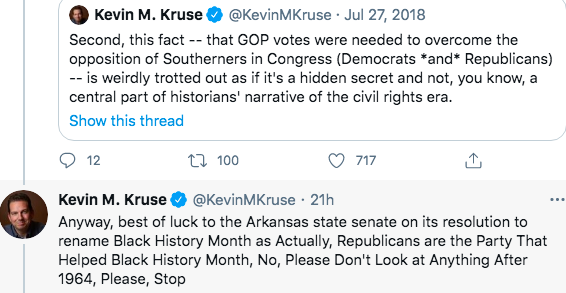 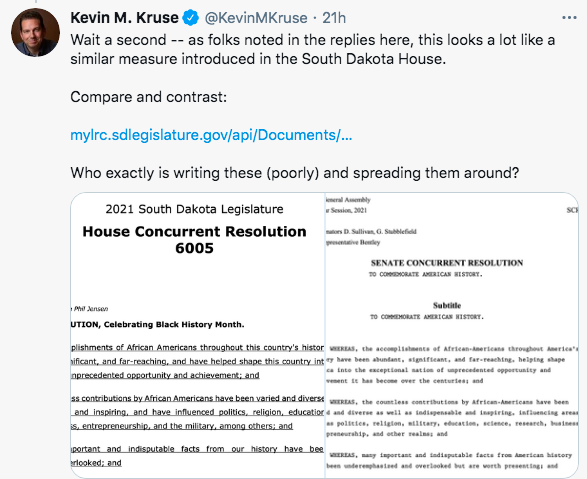 The white sponsors of this cookie-cutter perversion of Black history include two of the sponsors for Rep. Mark Lowery’s bill to prohibit teaching about slavery from the 1619 Project. (Later defeated in House committee.)

More good news came later in the day in the Senate, when it took up the resolution Kruse derided. 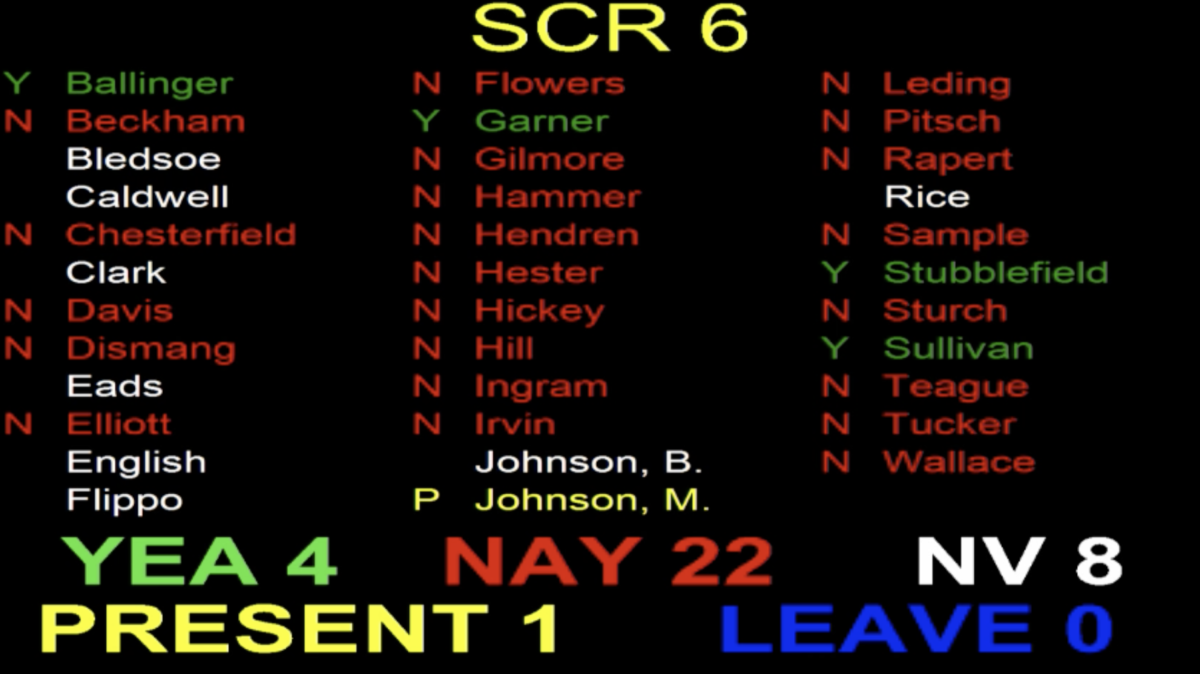 UPDATE: After a sometimes heated debate, the Senate defeated the resolution.

Republican Sen. Jim Hendren called the resolution “probably the worst I’ve ever seen.” He called it silliness, defining silliness as “partisan with petty purposes.” He said it was nothing more than an effort to point out the superiority of the Republican Party over the Democratic Party “back in the day.” He said the resolution “offends the people it is supposed to be commemorating.” (As opposition from the handful of Black senators indicated.) He said the Senate should work on things like health and education, rather than “cherry-picking” history to score points. Democratic Sen. Keith Ingram noted at least one factual error in the resolution after Republican Sen. Dan Sullivan insisted it had been carefully vetted by legislative staff. It also was mentioned that the resolution appeared to be a copy of a resolution from South Dakota.

Hendren recalled the last legislative session when he and others proposed a subcommittee on race relations, but the legislation went nowhere. This rankled Sen. Trent Garner who spoke heatedly about disrespect for his resolutions castigating Venezuela and China, topics of great importance to his constituents, he insisted.

Sen. Stephanie Flowers, a Black Democrat, spoke in her familiar passionate fashion on the topic and uttered a derogatory term about Garner while he spoke that prompted a “censure” motion by Sen. Missy Irvin. Flowers said if anyone should be censured it’s Garner, who ignores a rule on wearing a mask and, she said, carries a gun around the Capitol. The Irvin motion passed on a voice vote. It’s unclear whether any further action will be taken. Flowers called Garner a “dumbass.” Truth is a complete defense, it seems to me. He was soon memorialized in an Internet meme. 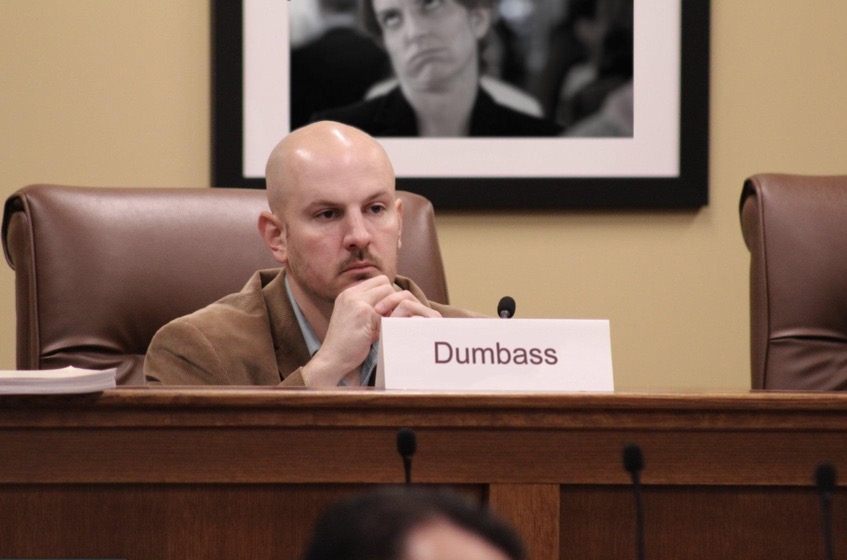 The reprimand of a Black senator on top of the full reading by Republican Sen. Gary Stubblefield of a litany of efforts to paper over the vote suppression and white nationalism of modern-day Republicans leads me back to what I wrote this morning.

I thought about it last night while reading a tour de force piece of history by Ty Seidule, a retired Army brigadier general who taught military history for years at West Point. His book “Robert E. Lee and Me: A Southerner’s Reckoning with the Myth of the Lost Cause”  describes his evolution as a Southerner imbued with the Lost Cause and the idealized image of Lee. That included his time in college at my alma mater, Washington and Lee University, which is trying to come to grips belatedly with its unfortunate place as a shrine of the Lost Cause. Seidule’s study of history eventually brought him to a different point of view — the South lost the war but won the fictitious narrative, creating a hero of Lee and the Southern cause not supported by inconvenient facts. (Lee was a traitor, brutal slave owner and white supremacist.) I particularly like his detailing of how Southern military bases came to be named for undistinguished Confederate generals in the 20th Century; how pressure from the United Daughters of the Confederacy and Southern politicians filled West Point in the 20th Century with tributes to Lee after years of regular Army people fighting tributes to Lee and other traitors; how the Lost Cause won a place for Confederate soldiers in Arlington National Cemetery; how white nationalism brought Confederate symbolism to state flags in the South and remain a symbolism of white supremacy today. And on and on. 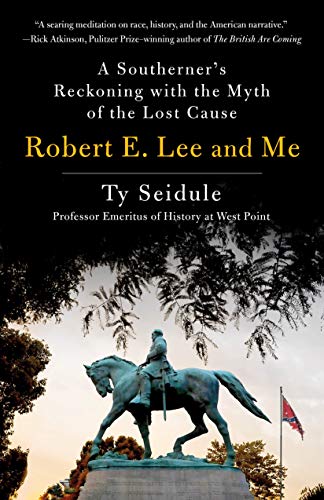