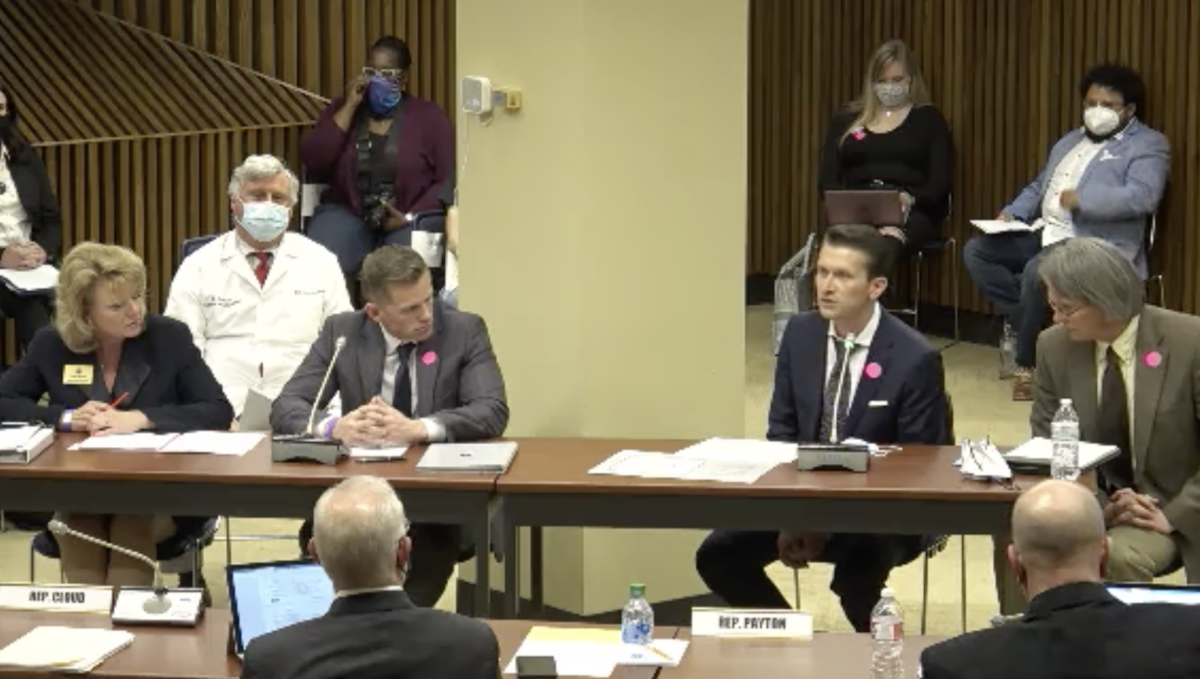 Rep. Robin Lundstrum’s HB 1570 to ban gender transition services — surgery or hormone treatment — to people younger than 18 won easy approval in a House committee this evening after a lengthy and emotional debate. About four members opposed the bill.

Testimony included Lundstrum’s offhand reference to the World Health Organization’s condemnation of genital mutilation, which sex assignment surgery is not. That refers to a practice in some cultures of cutting off women’s external genitalia.

Joseph Backholm of Washington, senior fellow for Biblical Worldview and Strategic Engagement at Family Research Council, suggested a recent growth in numbers of transgender people is a cultural phenomenon, perhaps a way to make money for those who provide transition services. He contended no study demonstrates benefits to gender transition. Lundstrum also brought a Fort Smith doctor, Dr. Kendall Wagner, who said that people suffering from gender dysphoria sometimes develop out of it when they get older. Billy Burleigh came from California to say he’d once been a transgender woman and transitioned back to male. He said he’d regretted all he’d been through. Dr. Grady Crossland, an anesthesiologist at UAMS and advisor to a Christian medical group, also testified against the bill.

Rep. Deborah Ferguson asked the two doctors how many patients with gender dysphoria they had treated. Crossland said he couldn’t say he ever had. Wagner said he had two to three patients he’d referred to counselors who had gender issues, but none who’d been treated. She also noted there’s no gender reassignment surgery done on minors in Arkansas. Is this a solution looking for a problem, she asked. Lundstrum said no. Other states are doing this and “starting to mutilate children.”

Sixteen people signed up to speak against the bill, but Rep. Mary Bentley moved to limit comments to two minutes each. Rep. Fred Allen said this wasn’t fair given the 45 minutes given to people who spoke in favor of the bill. The committee rejected his proposal to give each speaker five minutes.

A mother of a transgender boy said the bill might kill her son because it would stop his testosterone treatment. She said the bill will cause other suicides. “The state will have blood on its hands. … It is not the job of the state to tell me what medical treatment my child should receive.”

Opponents included social workers and doctors. Dr. Gary Wheeler, a former senior adviser to the Health Department, said the bill was based on misinformation and would dramatically harm children. Wheeler said medical groups including a pediatrician, ob/gyn  and others provide scientific support for the services. He said a legislative committee was a poor place to evaluate medical procedures.

Kirsten Sowell, a pediatric social worker tested emotionally about suicidal impulses that are reduced by gender-affirming care. Lance LeVar, an education program adviser, said the bill is discriminatory. “If you have not sat and listened to transgender, you don’t understand.”

Dr. Michele Hutchison, who leads the gender clinic at Arkansas Children’s Hospital, emphasized the psychiatric care her clinic encourages and its care in not pressing transition, generally delaying hormone treatment until around 17 years old. She said she was proud many patients they see have decided they were NOT transgender. “That means we’re doing it right.”

Willow Breshears, a transgender woman, said hormone treatment was life-changing for her and she rejected those who suggested transgender people suffered from mental illness. A transgender male said the bill is unnecessary because parental permission is required for treatment now.

Holly Dickson of the ACLU said the bill would harm a group that is one of the most marginalized already. She said it was unconstitutional to remove medical decision-making from families. A father of a transgender child (a real father from Arkansas, he said, not a lawyer from California) said he knew the committee was “hell-bent” to pass this bill but he repeated that it would fail in court. He said business will leave the state or not come to the state because of bills such as this. He said he was offended the state would pay lawyers to “defend this infantile nonsense in court.”  He kept speaking when his time expired and Committee Chair Jack Ladyman called in police officers to remove him. “You will prevail against this injustice,” he shouted to the transgender people present as he was taken from the room.

A transgender woman remonstrated Lundstrum for referring to vaginal surgery as “mutilation.” The head of Lucie’s Place, which provides shelter for LGBTQ youth, talked of suicide attempts and violence against trans people.

I haven’t done justice to the testimony. I urge you to replay the video when it is posted.

Lundstrum, in closing, defended imposing its will on children and parents. She says the legislature places all types of restrictions on young people. She claimed the bill looked out for children. “They can’t go back,” she said. But that was one of many inaccurate things she said. There is no surgery for minors in Arkansas. Puberty blocking can be reversed.

Rep. Deborah Ferguson opposed the bill. She would it would not allow physicians to even refer a patient for treatment. “You need to leave to parents and the medical community what is in the best interests of these children.” She said she doubted anyone on the committee knew a transgender person. She said the bill was driven by an outside lobby group and it was “intended to make life more miserable for a tiny minority of kids.” Bentley insisted the bill was about love for children.