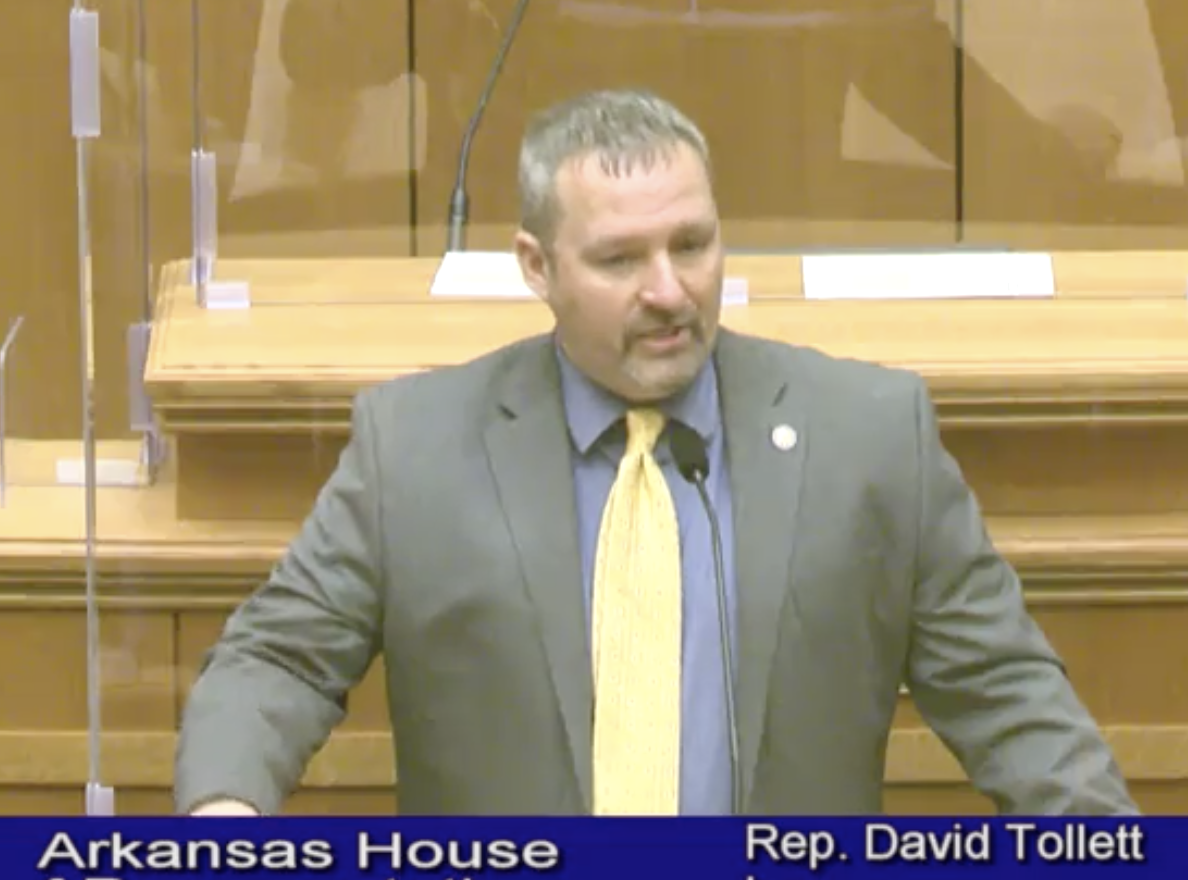 REP. DAVID TOLLETT: In opposing voucher bill, he suggested coming together for a bil helping all children.

After more than an hour and a half of impassioned debate, the Arkansas House today defeated a bill to double from about 500 the number of students in Arkansas who could receive state money for vouchers to attend private schools. The vote was 44-52, with two voting present and two not voting.

A motion to clinch the outcome failed, so the bill may come up again. UPDATE: Here’s the roll call.

The debate covered familiar talking points, with some legislators repeating speeches they’d given when the bill cleared a House committee 11-9 yesterday.

Proponents hammered on choice and emphasized that the bill would favor lower-income families (though the income cutoff is higher than the average family income in Arkansas.)

Opponents emphasized the loss of funding for public schools and the measure’s  open-ended growth from an initial outlay of $4 million. They talked of uncertainty about what students would be chosen and about the lack of standards for private schools. (They’d need only be approved by a private association of private schools.)

I was particularly moved by a couple of opponents. Rep. Jim Wooten (R-Beebe) said the bill would be “the final nail driven in public education in this state.” It’s a progressive nibbling away, he said. “If you think these private schools are going to take every comer that comes to their door, you are fooling yourself.”

Rep. David Tollett (R-Lexa), a school superintendent, told of the private schools in the Delta, creatures of segregation. He challenged legislators to name a minority private school in the state. “This privatizes of public education. It is a nationwide movement. It has struck many different states and not one of them has been successful.” He did the compounding of the cost: at a 25 percent growth rate, it will reach $1 billion in time.

He read from studies showing harm to students from voucher programs, particularly Louisiana where voucher students ended up in many poor quality private schools.

He said the state could have simply lifted a cap on the existing voucher program, which targets students with disabilities. Why, Tollett asked, does it take a 29-page bill to change things. “It’s a Trojan horse,” he said. “It’s not about the children.” He and Wooten both noted the money spent on scholarships ($30 million, Wooten said) by private schools to recruit athletes for prize-winning teams.

Tollett also said a promise of money for public schools in the fund that will finance vouchers is an empty promise because the categorical programs are already covered by federal money directed to needy districts. Tollett also commented that heard some say a vote by a Republican was a vote contrary to the party platform. He said nobody had tried to tell him that. Republicans accounted for a majority of the no votes. There are only 22 Democrats in the House.

Rep. Ken Bragg, who sponsored the bill, closed by emphasizing the narrowness of the scope of the bill and saying it wouldn’t harm public schools. He said it was about offering an opportunity for lower-income students to go to private schools.

The program is pitched as a “scholarship” program. The money comes from a dollar-for-dollar tax credit to those who donate to the fund. In short, it allows contributors to give their tax dollars solely to private school vouchers, rather than supporting the entire range of state services, as other tax money is spent.