Fans of participatory democracy are invited to the Capitol at noon today to rally for voting rights, which are under attack on multiple fronts in Arkansas.

A barrage of bills making their way through the Capitol will hamstring voters with new I.D. requirements, rule changes on absentee ballots and a threat of state takeovers for local elections.

The event is organized by For AR People, a nonprofit aimed at helping Arkansans take ownership of their state government by voting and holding elected officials accountable. Other organizers include the League of Women Voters, Arkansas United and Indivisible. The groups say bills on the table harm vulnerable Arkansans: Black and Brown communities, rural communities, elderly, people with disabilities, and those with limited transportation.

For AR People is keeping a running roster of the bills attacking voter rights. Those bills include: 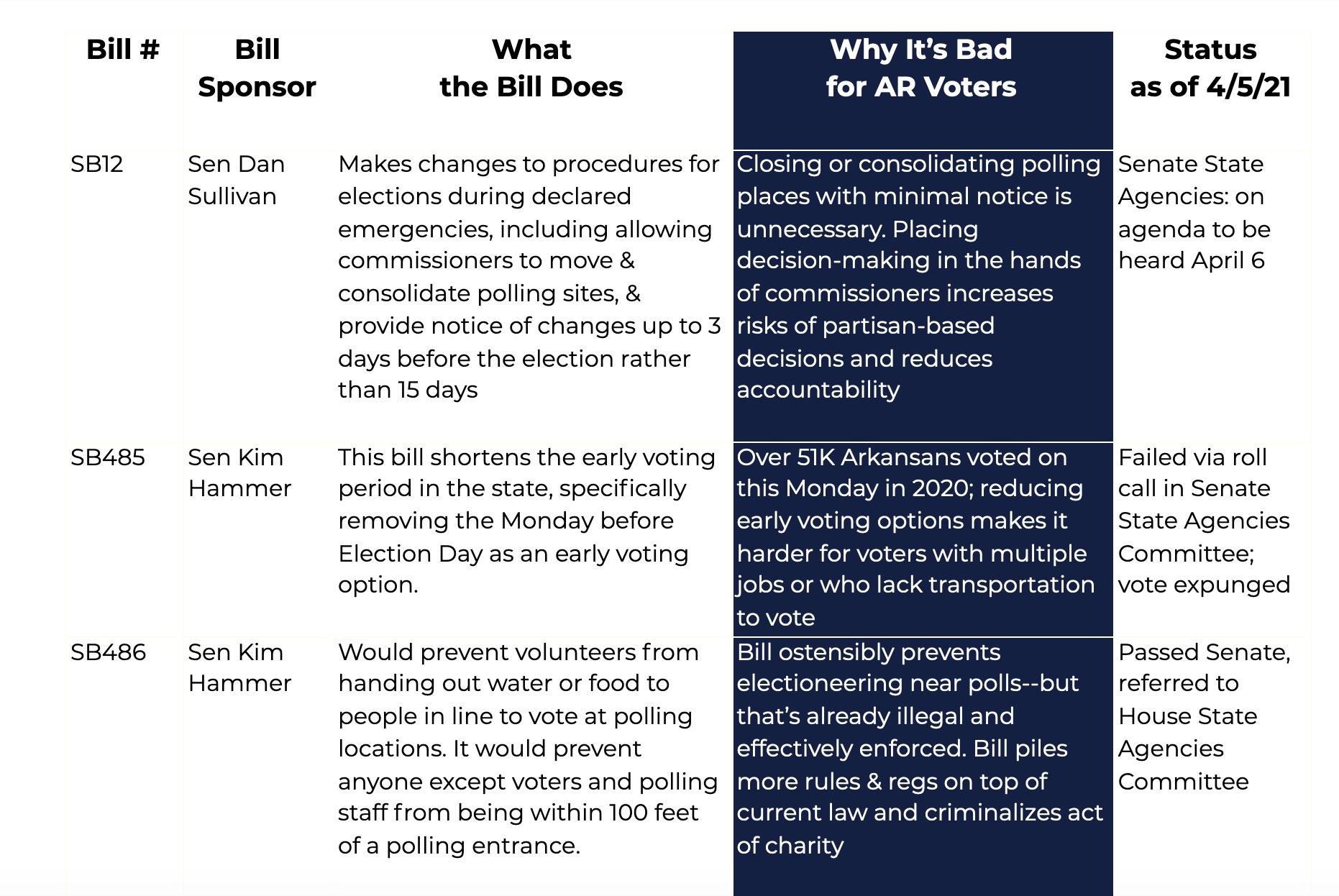 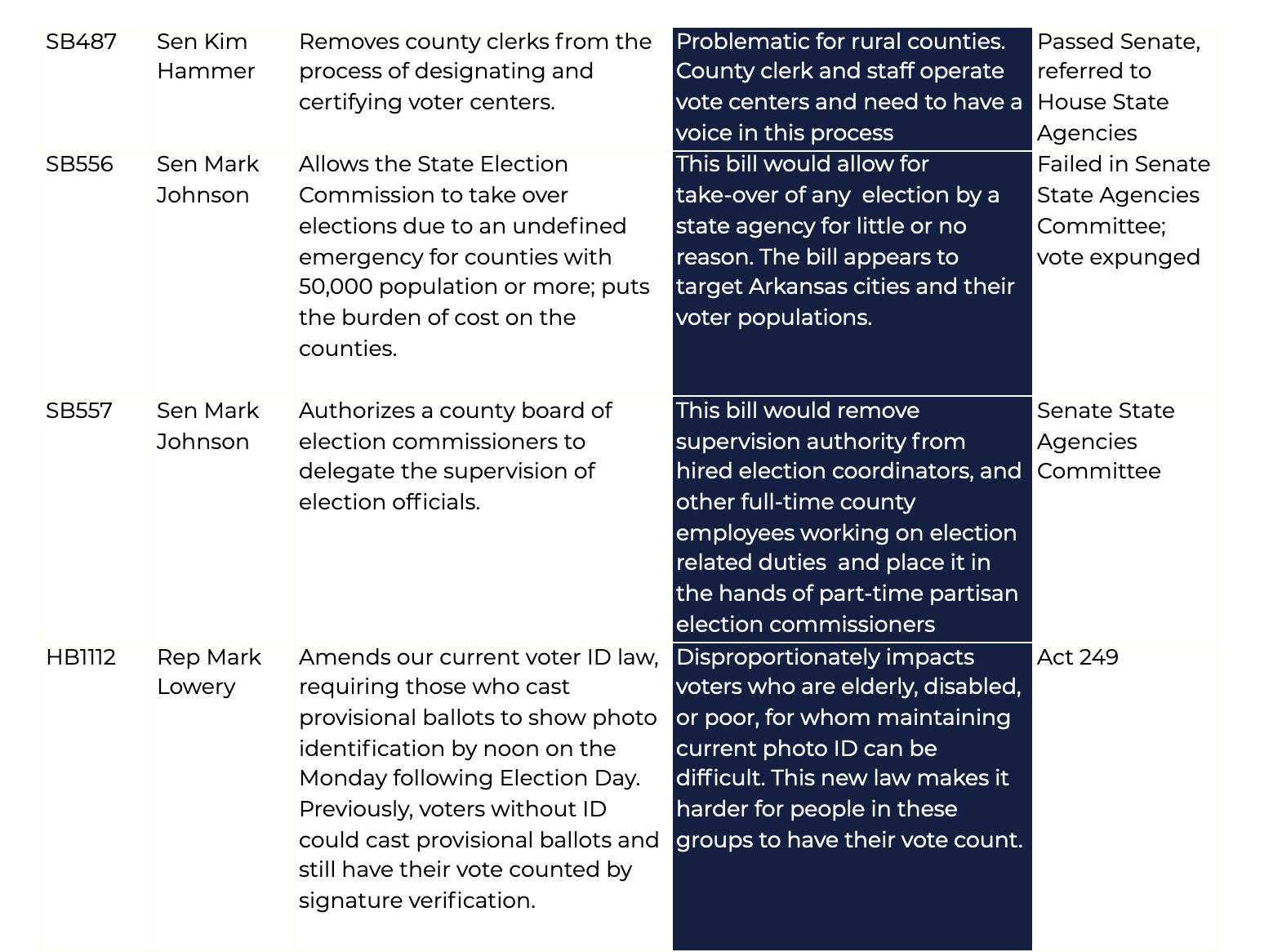 Pulaski County Election Commissioner Kristi Stahr and fellow Pulaski Republicans are driving many of the voter suppression measures, arguing that the prolonged and dramatic vote count in Pulaski County after the 2020 General Election is proof that our democratic process cannot be trusted. In fact, poll workers and county election staff worked steadily and reliably to process the more than 25,000 absentee ballots that poured in from voters opting to avoid crowded polls during a pandemic. That’s six times as many as usual.

Tensions ran high during the multi-week ballot-counting process in Pulaski County last November. Republican commissioners Stahr and Evelyn Gomez routinely berated county election staff and made a public show of complaining about Pulaski County Clerk Terri Hollingsworth, whom they suggested was not competent. Undeterred, Hollingsworth and her staff worked overtime and within the law to help voters who failed to submit the required ID get their absentee ballots counted (This process of “curing” ballots would no longer be allowed under Republican-sponsored bills now at the Capitol). Displaying an uncanny degree of emotional intelligence, Democratic Election Commissioner Josh Price ran interference throughout, disarming Republican commissioners’ verbal attacks on county election staff and diffusing their unfounded accusations of fraud.

Despite Price’s efforts, things got progressively weirder. Commissioners at one point pulled a dramatic all-nighter even though no deadlines were eminent. They called in Saline County Republican Election Commissioner Jamie Clemmer to consult as an experienced  election expert, although Clemmer has been a commissioner only since 2018. Gomez rarely allowed Pulaski County Attorney Adam Fogleman to speak, cutting him off when he tried to offer legal advice and turning to former Republican state legislator Doug House instead.

At one point a police officer walked then-chair Evelyn Gomez away from the ballot-tallying area at the Pulaski County Election Commission office to question her about allegations that she assaulted Deputy Election Director Shawn Camp. A box of 327 ballots the commissioners had marked as invalid were inadvertently counted, setting off a fresh round of unproven conspiracy accusations.

The intense 3-week counting process ended with a win for Democrat Ashley Hudson, who defeated incumbent Republican Jim Sorvillo by 25 votes. Sorvillo and his attorney A.J. Kelly exhausted every legal avenue they could find to try to overturn their defeat, but were not successful.