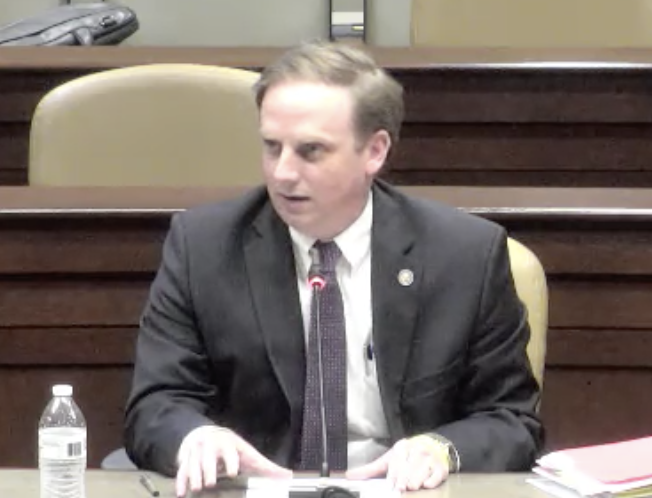 The Republican leadership dumped further shame on themselves this afternoon by ignoring rules and sending a sham “hate crimes” bill to the House floor without a roll call vote.

Chair Rep. Carol Dalby (R-Texarkana) ignored requests for a roll call vote on a do-pass recommendation in the House Judiciary Committee for SB 622, the meaningless “hate crime” bill that House and Senate leadership have gotten behind to give some window dressing to the state for refusing to pass a real hate crime bill that includes specific coverage for sexual orientation and transgender people. It passed the Senate and only a House vote keeps it from the governor, who’s anxious to sign it.

In the House committee, Speaker Matthew Shepherd carried the bill. He admitted they simply came up with something that could pass. He contended it was substantive. He disputed those who have called it a sham and farce. But: It doesn’t enhance penalties. It narrows the crimes that are covered. It sets an 80 percent sentence for certain serious crimes as opposed to a 20 percent enhancement. It names no protected classes.

To date, minority groups most affected by hate crimes have denounced the bill. White men — many of them conservative Republicans who opposed the real hate crime bill because of its protection for sexual minorities — have been its primary supporters, along with the business lobby, anxious to polish the turd that is recent Arkansas lawmaking on individual rights. See this Washington Post editorial.

The Democratic Party issued this release:

Arkansas is one of three states in the nation without a Hate Crimes Law. On Wednesday, an Arkansas Senate committee defeated Senate Bill 3 which would have created a hate crimes law. On Thursday, the Arkansas House Judiciary Committee advanced a bill that proponents are intentionally mislabeling as hate crimes legislation despite failing to garner a single vote from members of minority groups in the Legislature. SB622, the sham hate crimes bill, was passed on a voice vote. Committee Chair Carol Dalby ignored two separate audible demands for a roll call, gavelling the committee into an abrupt adjournment. This move prevents the public from knowing who voted for and against the bill, giving members cover for their votes.
Democratic Party of Arkansas Chairman Michael John Gray
“While it is normal to disagree about policy the heavy handedness from Chair Dalby, with the blessing of Speaker of Matthew Shepherd, is beneath the process and beneath them personally. I was honored to serve with both of them and have seen them operate on a higher standard. It’s sad to see them sink to such a method. This parliamentary trick was a tactic used to dismiss minority voices.
While some may see it as a power move, it is a weak move beneath the office. Any members, Republican or Democrat, who are rejoicing about the fact their vote was not recorded on this bill due to such a cowardly move should consider whether or not they’re worthy of their office.”

Shepherd filibustered for 30 minutes or so. He said nothing that bears repeating. Watch here if you like baloney. Oh, and he said if a court has a problem with it, then the legislature can fix it. If history is a guide, in a couple of decades or so.

Rep. Tippi McCullough (D-Little Rock) noted the bill carries no definition of an identifiable or recognizable class for protection.  Rep. Vivian Flowers (D-Little Rock) said the bill ignored increases in racial and anti-Semitic hate crimes. Some ultra-conservative legislators don’t like it either. One claimed somebody could file a complaint about a sermon they didn’t like. This is untrue since, first, a conviction for a serious crime is necessary.

As usual, testimony was limited by the motion of a Republican; each speaker got far less time than that given Shepherd. Opponents included a Methodist preacher, a Pine Bluff NAACP member and former Supreme Court Justice Annabelle Imber Tuck, who said the proposal was faulty on several grounds — it’s vague, it’s not an enhancement and it will be impossible to compile reliable data on enforcement. Jerry Cox of the Family Council, a right-wing “Christian” lobbyist opposed the bill essentially because it’s not hateful enough. He has said it might open the door to protection for LGBT people. Randy Zook of the Arkansas State Chamber of Commerce repeated his support for the bill saying failure to do so would be bad for the state’s image. As if this would overcome the cruel work product of this retrograde session.

McCullough said indeed the bill protects everyone, which is the problem. “If you’re not a minority maybe it’s difficult for you to understand what this feels like and looks like.” She said she was speaking up for those who remain invisible. After 21 years of trying, she said, the legislature still won’t say the words of people who are the main victims, such as the black transgender women killed in Arkansas this year. Flowers said hate crimes exist and are directed at particular groups, as they have been for centuries. “They need protection. We know who those groups are and they should be named. … We need a bill protecting the people who need protecting.”

Rep. Keith Slape, a Republican from Newton County, supported the bill. It’s justice for all, he said. Another Republican, Rep. Marcus Richmond, long an opponent of hate crime legislation, said he liked this bill, too. They tell the story of the sham in a nutshell. If they are far from it, it doesn’t accomplish anything except more discrimination against certain classes of people.

Dalby declared the bill passed on a voice vote in which nays sounded louder than ayes. She quickly gaveled adjournment without recognizing shouted requests for a roll call.

Expect quick work on the House floor to pass this special window dressing. Don’t expect the nation to think any better of Arkansas for it.