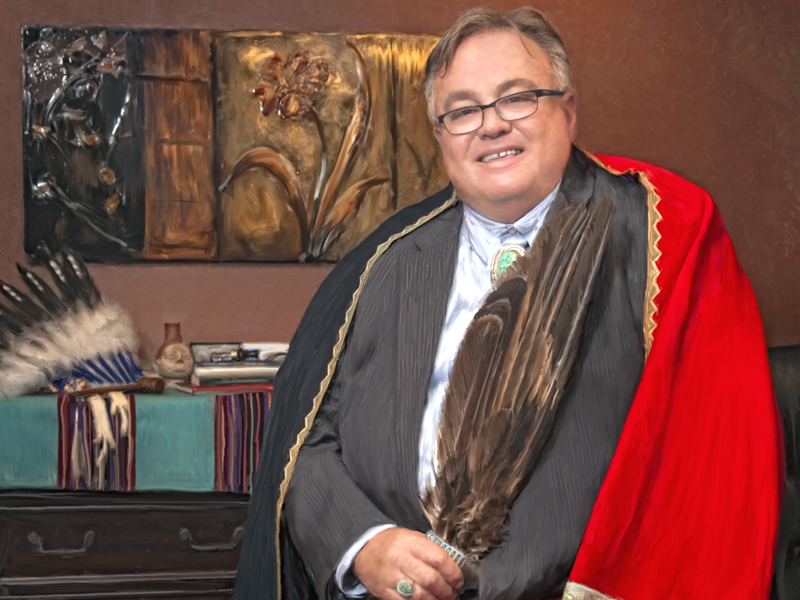 The Quapaw Nation, owner of the Saracen casino in Pine Bluff, announced today criminal charges and a civil complaint against John Berrey, the former leader of the tribe, and other former tribal officials for misspending millions for unauthorized pay and bonuses and using casino proceeds for personal purposes.

Berrey, who was ousted as tribal leader last year and planned to seek tribal office again this year, sent an email response to KOSU:

“The latest events are just more efforts to defame. It was posted the day filing for candidacy opened and it’s an attempt to stop me. I look forward to clearing my name and running for vice chairman of the Quapaw Nation and begin to heal our Nation.”

I also received this statement:

Rory Dilweg of Ocotillo Law and Policy Partners, LLP represents John Berrey. We are aware that the Quapaw Nation’s Special Prosecutor has filed a criminal complaint against John Berrey for alleged violations of the Quapaw Law and Order Code. Mr. Berrey denies all of the complaint’s allegations, and he looks forward to clearing his name in court.

The new Quapaw leaders, Chairman Joseph Byrd and Secretary/Treasurer Guy Barker, came to believe their own falsehoods, produced some evidence, and have now taken it outside of the tribe to the general public. They have hired a special prosecutor and filed a criminal complaint in tribal court alleging embezzlement, misappropriation of funds and other charges.

“It’s all made up, and it is strictly political,” Berrey said. “It shouldn’t even be aired out in the general news media like they’re doing. It just hurts the tribal members.

“I’ll prove them wrong in this court trial, and I’m running for the vice chairman seat in July so I can begin to bring our people together again and heal the Quapaw Nation.”

The Nation has historically worked out its differences, political and otherwise, within its own established grievance process, and preferred never to disparage itself or its members to the broader public. Berrey is unsure where this hate comes from with Byrd and Barker.

Berrey made good money like any CEO of a billion-dollar company would make. But his pay was always approved by the Quapaw Business Committee; he couldn’t do anything alone.

“My number one goal now is to allay the fears and anxiety that our tribal members are feeling over all of this nonsense,” he said. “I’ll beat it in court, and I’ll return to the Business Committee for the good of our people.”

The news release from the Quapaw Nation, which also has a casino in its home state of Oklahoma and Missouri:

The Quapaw Nation, on behalf of two of its gaming boards, the Downstream Development Authority (DDA) and the Saracen Development Authority (SDA), filed criminal charges against its former Chairman John L. Berrey and former Secretary Treasurer Tamara Smiley-Reeves on Friday, April 16, 2021. The 11 criminal counts against Berrey and seven criminal counts against Smiley-Reeves range from abuse of office to conspiracy and embezzlement. Each count is punishable by up to three years in prison and a $15,000 fine. Some counts are punishable by the temporary suspension of tribal benefits or permanent banishment from Quapaw Indian Country.

In addition to criminal charges, Berrey, Smiley-Reeves and seven other individuals face four civil complaints: fraud, constructive fraud, conversion and unjust enrichment. The Quapaw Nation seeks civil relief from the nine defendants in the form of $7 million in monetary damages; punitive damages in an amount sufficient to punish defendants and deter such conduct in the future; attorney’s fees and related costs, to the extent recoverable by law.

All charges were filed in the Court of the Quapaw Nation (The O-Gah-Pah) and are related to a forensic audit and investigation into misappropriation of funds initiated in June of 2020 by the Quapaw Nation Gaming Authority. In addition to Berrey and Smiley-Reeves, the other seven implicated in the civil suit are:

The investigation revealed Berrey consistently abused his authority as Chairman by using tribal funds and assets for his own personal benefit and the benefit of those around him. Accounting records, cell phone data, computer data and text messages show the tribe paid for private jets to fly Berrey, his family and friends to concerts and events. These concerts and events were not related to any contract and were of no benefit to the tribe or casino player development.

Executive Secretary Tena Smith, often acting as the Chairman’s personal secretary, booked the travel, paid for the tickets, lodging and other expenses, and sent confirmation information to friends of Berrey and his associates via her Quapaw Nation cell phone.

Chairman Berrey and Secretary Treasurer Reeves allowed the issuance of more than 70 company credit cards to numerous individuals, employees, agents, consultants and vendors not employed by Downstream Casino Resort or the Quapaw Nation. The complaint also revealed the gross misuse of casino funds for personal use, including, but not limited to:

Personal and private use air travel valued at more than $100,000
Tickets to Kansas City Chiefs football games, Kansas City Royals baseball games, Arkansas Razorbacks sporting events and various concerts valued in excess of $100,000
Free meals and alcohol valued at more than $100,000
Spa treatments totaling more than $75,000
The purchase of personal goods and services on Downstream Casino Resort credit cards costing more than $50,000
Statements revealed purchases of luggage, personal trips, gifts, donations, electronics, event tickets, many cell phones and related electronics, medical equipment and non-business-related activities in excess of $100,000
Significant revenues were spent comping food and alcohol for parties in suites at Downstream Casino Resort totaling well over $100,000.
Cash withdraws from casino cashiers in excess of $10,000
Douglas Dry, acting as a special prosecutor and attorney for the Plaintiff, filed the charges on Friday and requested summonses issued in lieu of warrants for Berrey and Smiley-Reeves. Both are summoned to appear on May 6 at 10 a.m. in Quapaw Tribal Court at the Ki-Ho-Ta Center in Miami, Okla., before Judge Diane Hammons.

“While I’m saddened at the depths of criminality discovered, the Quapaw Nation is a nation of laws, and no one is above them. I’m pleased charges have been filed against these individuals, who will now face the consequences of their dishonesty and greed. For too long, the defendants treated the Quapaw Nation and its assets as a personal bank account and playground. The charges filed Friday send a strong message that those days are over.

“I’d like to thank the auditors and investigators for the countless hours they spent combing through records, analyzing data, conducting interviews and constructing a timeline showing a clear pattern of abuse, fraud, waste and gross mismanagement of the Quapaw people’s assets and funds. The due diligence that went into this investigation is commendable.

“I also want to thank the Quapaw Nation citizens for their patience. Between this investigation and maneuvering a global pandemic, the past year has been extremely difficult for everyone in our tribe. Our citizens demanded transparency and accountability long before now. Asking them to remain patient while auditors and investigators compiled a thorough case was not easy, so I’m grateful for their patience, support and continued prayers.

“Despite all of this, the Quapaw Nation is stronger than it’s ever been. Now that we’ve rooted out corruption and theft, our casinos are more profitable than ever, which means more profits are flowing back to the Quapaw people. We’re building a better, stronger Quapaw Nation for future generations. As a new father myself, I’m reminded that’s what serving our people is all about, and that gives me more hope than ever before.”

The first hearing in the criminal counts against Berrey and Smiley-Reeves will be May 6 at 10 a.m. in Quapaw Tribal Court at the Ki-Ho-Ta Center in Miami, Okla. Judge Diane Hammons will preside.

Berrey was the driving force behind the drive that led to the creation of the Pine Bluff casino under a casino gambling amendment that also authorized a casino in Pope County and legalized existing casinos in Hot Springs and West Memphis.

Berrey declared in a private Facebook group he moderates that he intends to run for the position of vice chair.

“I’m going to run for vice chairman,” he wrote last Friday. “I’m sick of the lies and manipulation and I will get the Bear money and make sure all Quapaw get money not the friends and family of the few!!!!”

Berrey wrote his post after weeks of hinting that he would be announcing something big. “The Bear money” is a settlement the tribal nation is in the middle of closing on that settles a decades long battle over mismanagement of trust land.

It’s unclear whether or not he can mount an election campaign for a seat on the Business Committee now that charges have been filed against him.

Berrey’s legacy with the Quapaw Nation is complicated. Many credit him with generating economic opportunities for the tribal nation including a new meat processing plant, three gas and convenience stores, a coffee roasting company and two resort style casinos, one of which just opened in Pine Bluff, Arkansas.

However, over time, some say that he has created an oligarchy where he and a few others in his administration made decisions without input from citizens or the business committee.

These are the criminal charges.

This is the civil complaint.