For eight years now, ShadowVision has walked among us. Did you not know? That’s to be expected. ShadowVision stays quiet. He avoids the limelight. But he wants the River Cities to take some comfort in knowing he’s always on duty.

ShadowVision stepped out of the shadows this week to issue a public challenge to the serial stabber blamed for three deaths and one violent attack in the past year. All attacks happened in the wee hours in a section of midtown Little Rock south of I-630.

“I know that the serial stabber is keeping a eye on my page here,” ShadowVision wrote on Facebook. “So this is a threat to you when i find you i will show you what i do to serial killers. I am hunting you right now.”

A quiet presence on the streets but a Facebook phenom, ShadowVision has 4,444 fans, and classifies his page as “community service.” His service record is impressive, but unverifiable. “I’ve stopped a couple of armed robberies. I’ve exterminated two serial killers.” We haven’t heard about those incidents, he said, simply because they happened long ago.

ShadowVision’s origin story? There was no radioactive spider bite, no traumatic family homicides. He was born this way. ShadowVision came here from Scotland eight years ago, which perhaps explains his unusual speech pattern. He made his home in North Little Rock because he felt a calling. “I heard everybody here was losing hope, so I decided to head out here and start helping,” he said.

So he brought his martial arts skills and impressive superhero kit and marked out his patrol area, which is usually confined to North Little Rock. Photos on his Facebook page show him standing vigil at Argenta Plaza, and also beside the fountain drink dispenser at what appears to be the Kum and Go on JFK. Sometimes he teams up with fellow North Little Rock defenders Master Legend and Antihero, but for the most part, ShadowVision works alone.

ShadowVision said he will cross the Arkansas River when he needs to, and that now is one of those times. The suspect in the serial slashings is described as a man on foot, Black, but no one has many more details than that. Little Rock Police released only one photo of the suspect, and his face isn’t visible. Is it enough to go on?  ShadowVision vows to try. “All I can say is, he can either turn himself in or I will hunt him.”

Should ShadowVision find the slasher, here’s what he would bring to the fight: A steel helmet, bulletproof chest and back plates, shoulder pads, fanged arm cuffs he uses to catch himself on downhill slides, handcuffs, two steel sais strapped to his thighs and two katanas that ride on his back. 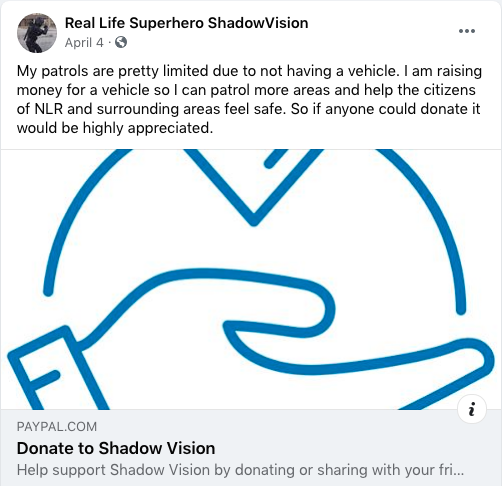 ShadowVision has a need for speed, and would appreciate your donation to his vehicle fund.

The one obvious thing missing from his arsenal is speed. ShadowVision lacks any type of superhero mobile, so he walks wherever he goes. The vehicle he had before got shot up, he said. So he logs about 80 miles a week, which keeps him in fighting shape. He’s in the market for a car (“A scion xD is what i am after. They are agile and can take turns at high speed,” he wrote on Facebook), and  is accepting donations via Cash App and Paypal.

But ShadowVision said money isn’t really what he’s after. He wants safety from the serial killer that has Little Rock on edge.

“I really do not want any reward,” he said. “I want him off the streets. One way or another, he will be.”

At that, ShadowVision turned and walked east down Bishop Lindsey Avenue, disappearing into the shadows.