With a new Arkansas law going into effect that significantly extends the statute of limitations on child sexual abuse, former Boy Scouts preyed upon by a Scout leader in Hot Springs are speaking up about what happened to them and pursuing new legal options.

Four victims of former Scoutmaster Sam Otts held a press conference Thursday to tell their stories and explain why they’re seeking compensation from the Boy Scouts of America and local councils in Arkansas. Boy Scout officials in Arkansas knew or should have known that Otts was a pedophile, and the adults who learned about the abuse in Hot Springs were wrong to swear the then-young boys to secrecy by invoking the Scout oath, the men said. 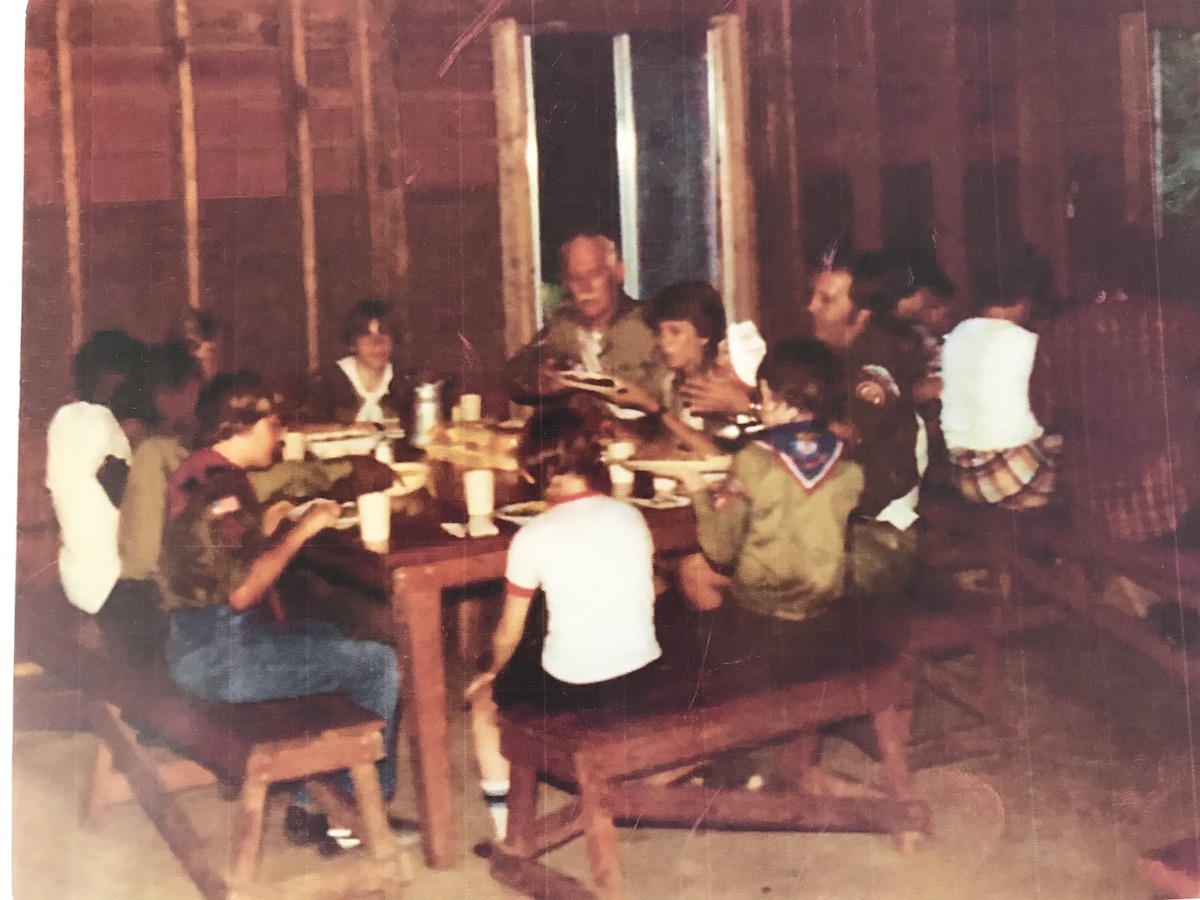 Sam Otts (with white hair and mustache) molested Scouts in his charge in Georgia and Arkansas in the 1970s and ’80s.

William Stevens, Lavell Campbell, William “Skip” Goodrum and Jeff Burfeind are all in their early 50s now. They were 9, 10 and 11 years old when Otts molested them during campouts and other Scout functions. While the men all knew each other in the late 1970s and 1980 when the abuse occurred, none of them realized the others were fellow victims at the time. All of them recall being asked by Scout leaders to vow that they would stay quiet about the abuse and trust the adults to handle it.

His grandmother’s casual question about how his campout went led Goodrum to disclose to her that Otts had suggested he and the other boys all take their clothes off because of the heat. Goodrum’s grandmother’s further questioning revealed Otts touched the boys inappropriately. The Goodrum family reported the abuse to Scout officials, a move that ended Otts’ tenure as scoutmaster. But Goodrum’s parents opted to not file charges to save their then 10-year-old son from the trauma of a trial, and assumed the Boy Scouts would make sure Otts couldn’t abuse again. Goodrum’s family didn’t tell anyone else about the abuse, and the men remember Otts disappearing from Hot Springs mysteriously and without any fanfare. They would all go on to keep the abuse to themselves for decades. Aside from Goodrum, not even their parents knew.

It’s not clear what happened to Otts after he left Hot Springs, although Campbell saw Otts in Little Rock around 1980. If he’s still alive, Otts is in his 90s. 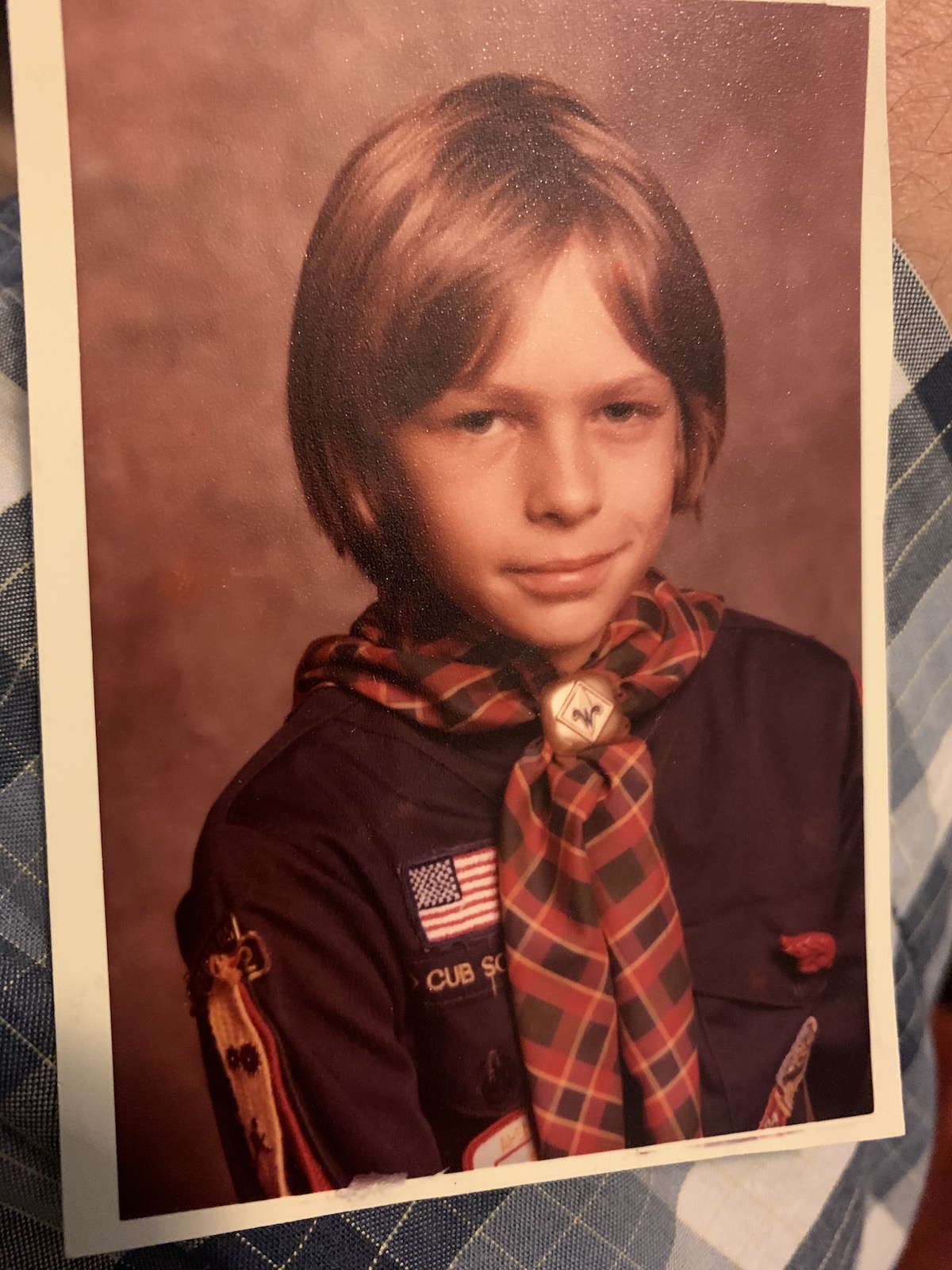 Jeff Burfeind moved to Hot Springs at age 9. Self-described as “scrawny, shy and awkward,” his parents put him in Scouts to help him make friends.

It wasn’t until 2016 that Stevens discovered via a Google search that the Boy Scouts of America had a “perversion file” on Otts that predated the man’s time in Hot Springs. For decades the Boy Scouts of America kept what they called ineligible volunteer files, aka perversion files, on Scout leaders who abused the boys in their charge. An Oregon judge considering allegations of sexual abuse made those files public in 2012.

The file Stevens found on Otts revealed that Otts was fired from a teaching job and as a Scout leader in Georgia after he was caught molesting boys there. Those incidents were documented and put into Otts’ file. Why, then, was Otts allowed to move to Arkansas and work in Scouting again?

“Some due diligence would have been wonderful,” Burfeind said.

“But they put him in charge of three troops,” Stevens added.

Stevens filed a civil lawsuit against Boy Scouts of America and its local governing body, the Quapaw Area Council, in 2018. But a judge dismissed the suit because the statute of limitations at the time required victims to sue before they reached their 22nd birthdays. “I felt like I’d been raped again, and the laws of Arkansas allowed it to happen,” Stevens said.

The new law passed this year gives victims until age 55 to file civil suits. It also creates a 2-year window during which anyone of any age can sue, giving victims over age 55 a chance to pursue justice.

The new law makes sense, said Sen. David Wallace (R-Leachville), who sponsored the bill. Department of Justice data shows 86% of childhood sexual assault survivors never report their abuse. And those who do report it often keep it quiet for decades first. The average age of reporting abuse that happened in childhood is 52 years.

Wallace said he was surprised to learn that victims keep their abuse secret for so long. He was also surprised by how many victims contacted him to support his bill, including people he had known for years but had no idea they had been abused. Stevens testified in favor of the bill twice. Another victim of childhood sexual abuse came to the Capitol to share his story, but didn’t want to testify in front of a room full of people. “He was walking, pacing, back and forth, almost like a caged animal,” Wallace remembered. “He came up with tears in his eyes and told me, “I can’t testify in the committee room, but I want to say what I have to say.”

The goal of the new law is to create a realistic timeline for justice, considering that it takes so many victims such a long time to come forward. It passed easily, with only one lawmaker, Sen. Alan Clark (R-Hot Springs), voting against it.

“I believe that there will be men and women that were abused 20, 30, 40 years ago, or even longer, that will come forward, and they’ll be able to face the individual who abused them, they’ll have their day in court,” Wallace said. “I think — I hope — it will be therapeutic.”

Helping get this law passed has already been therapeutic for Stevens, who said he sleeps better now. “The hardest critic I’ve had is my 10-year-old self, yelling at me in my dreams. He’s been silent since this law passed.”

It’s too late for three of his former troop mates that Steven later learned were also victims of Otts. One killed himself, one died in prison and another died young after years of substance abuse, Stevens said.

Burfeind said a legal remedy will help him find closure for the abuse he endured in 1978, when he was new in town and his parents enrolled him in Boy Scouts to help him make friends. “I feel without the closure I need, I am still a child laying on the floor of that tent, being molested,” he said.

The Boy Scouts of America is fielding legal challenges from thousands of abuse victims around the country, and is currently negotiating a potential bankruptcy as they take stock of their assets and try to figure out how to handle the monumental claims against them. Any new legal claims are on hold until July because of that bankruptcy process, said Josh Gillispie, a North Little Rock attorney representing Stevens, Campbell, Goodrum and Burfeind. “Come July, it’s open season,” Gillispie said. He plans to seek financial compensation for his clients’ suffering. Gillispie said he believes the Boy Scouts of America continue to cover up recent abuse in their ranks. “It’s the nation’s oldest and largest pedophile ring, and it occasionally features woodworking and archery.”

On behalf of the Boy Scouts of America (BSA) councils that serve Arkansas — organizations dedicated to improving the lives of young people — we are deeply saddened by the pain and suffering that survivors endured. It is important to note that, while any instance of abuse is one too many, the overwhelming majority of abuse claims filed in the national organization’s bankruptcy case relate to allegations of abuse that occurred prior to implementation of our modern youth protection policies more than three decades ago.

As part of the Scouting organization, we are committed to fulfilling our social and moral responsibility to equitably compensate survivors while also ensuring that Scouting can continue to serve youth, families, and local communities in Arkansas for years to come.  We will continue to work in good faith to help achieve a global resolution in the national organization’s Chapter 11 case that would achieve both imperatives.

Boy Scouts of America revamped its policies significantly in recent decades in light of stories like the ones about Otts and his victims. Those changes include:

mandatory youth protection training for all volunteers and employees; a leadership policy that requires at least two youth-protection trained adults be present with youth at all times during Scouting activities and bans one-on-one situations where adults would have any interaction alone with children – either in person, online, or via phone or text; a thorough screening process for adult leaders and staff including criminal background checks, and the prompt mandatory reporting of any allegation or suspicion of abuse to law enforcement.