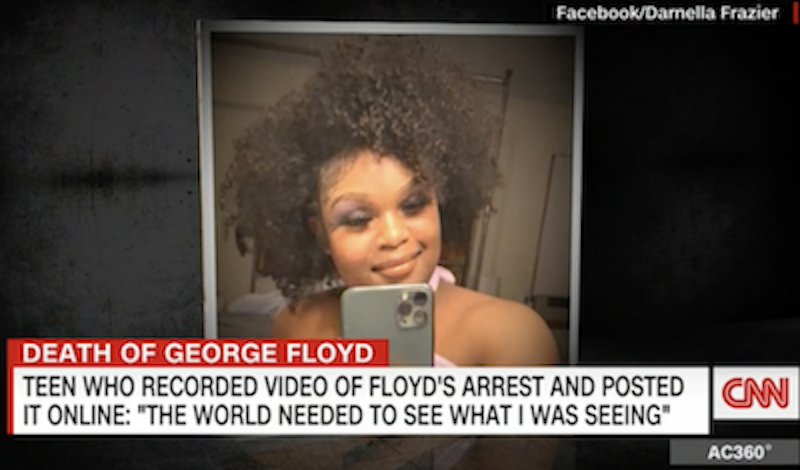 Here’s an item that reminds me of an issue close to home.

Frazier was working for no news organization. She was a concerned citizen who captured injustice and shared it with the world, just as many past Pultizer winners have done. Visual images have an enormous impact, Clark notes, whether the fire-hosing of civil rights demonstrators or the body of the murdered Emmett Till.  Clark writes:

Darnella Frazier’s work lives in that tradition. Her excruciating video had a social and ethical purpose, one that aligns with journalistic values: To give voice to the voiceless, to speak truth to power, to reveal secrets that the corrupt seek to hide, to stand strong in a moment of personal peril, and to document a fleeting reality that is fraught with meaning.

…The Pulitzer Prizes in Public Service and other categories are often evaluated based on their measurable effects in rooting out corruption and contributing to the public good. Frazier deserves the prize.

Clark could have taken this to a much broader question. Who is a journalist? What is journalism?

I’d argue that anyone with a computer and a social media account or a website can be a journalist. Many with such limited tools deserve that recognition whether they work for an “establishment” news organization or labor for free out of their basement.

Don’t talk to me about gatekeepers and the mix of opinion and newsgathering. You can gather news, report it and be opinionated. See the Arkansas Times. See Fox News. (The more honest you are about writing from a point of view, the better.) In time, you’ll be known by your record.

I’ve also worked in and around “establishment” news organizations long enough to know that they make mistakes of fact and judgment. Their establishment cred extends them no infallibility.

The proliferation of information sources (and how fast it is disseminated) creates problems, including a torrent of malicious misinformation. Consider Russ Racop, the tireless blogger about Little Rock police and government. He doesn’t serve himself well with silly photoshopping and crude public comments about city officials, but he has undeniable sources that have put him ahead of the rest of local media on a broad range of stories about police conduct and city spending.

Consider also Elizabeth Lyon-Ballay, a blogger on education topics, who’s been sued by someone named in one of her articles. Lyon-Ballay is more of a journalist than many on the web given high stature. She files FOI requests. She cultivates sources. She, like Racop, has broken stories based on solid public record information obtained through her reporting — about charter school practices, school spending and a case of physical mistreatment of a student by a principal.

Yet, in the trial of her defamation case, Judge Mackie Pierce refused to accord her journalist privileges. He said she was not protected by the state’s shield law and must reveal her sources.

She IS a blogger. (As am I.) She is a reporter who describes herself as an “indie journalist.” She is, by the very definition of how her words are delivered, an Internet news source.

Pierce was wrong. His reasoning implicates me, that new Internet news startup in northern Pulaski County and untold others. Sooner or later, the courts will have to meet this issue head-on. And, no, we don’t want the legislature defining who’s a legitimate journalist.

None, including Lyon-Ballay, deserve immunity for defamation. She allegedly made errors in one of her articles about the deep-pocketed plaintiff in the case that has since been removed from the web (Lyon-Ballay disputes that there were errors). If she did err, were they deliberate falsehoods? That’s a question for the judge and jury to decide. Is the plaintiff, former Little Rock School board and Community Advisory Board member Melanie Fox, a public figure? If she is, that makes a defamation case harder to prove. Again, that’s up the judge.

Fox has the best media lawyer in town, John Tull, who I like and respect. But he did his sometimes-clients at the Arkansas Press Association no favors. He argued to the court that the law does not define “internet news source” and blogs get no protection under the shield law. If not, the law is an ass. By Tull’s definition, I’m out of luck should someone sue me over content provided by an unnamed source. I must reveal them or face a fine and attorney fees for refusing to do so.

Also: Many so-called “newspapers” now exist only in Internet form. They are but publications at a certain URL on the world wide web, the same as Lyon-Ballay’s website. Newspapers have been so ravaged by the Internet that many have become shell operations. A tiny staff — even a staff of one — does not disqualify them as news organizations.

Read any website at your pleasure and peril. Hold those who make mistakes and intentionally supply misinformation accountable, by ignoring them if nothing else or by a lawsuit if they publish defamatory lies.

But understand that the world of information has changed. Anyone with a smartphone can change the world, or at least a slice of it, by distributing information. That is so no matter how a judge chooses to define a person’s work and no matter how uncomfortable some might find the exposure. See Darnella Frazier.