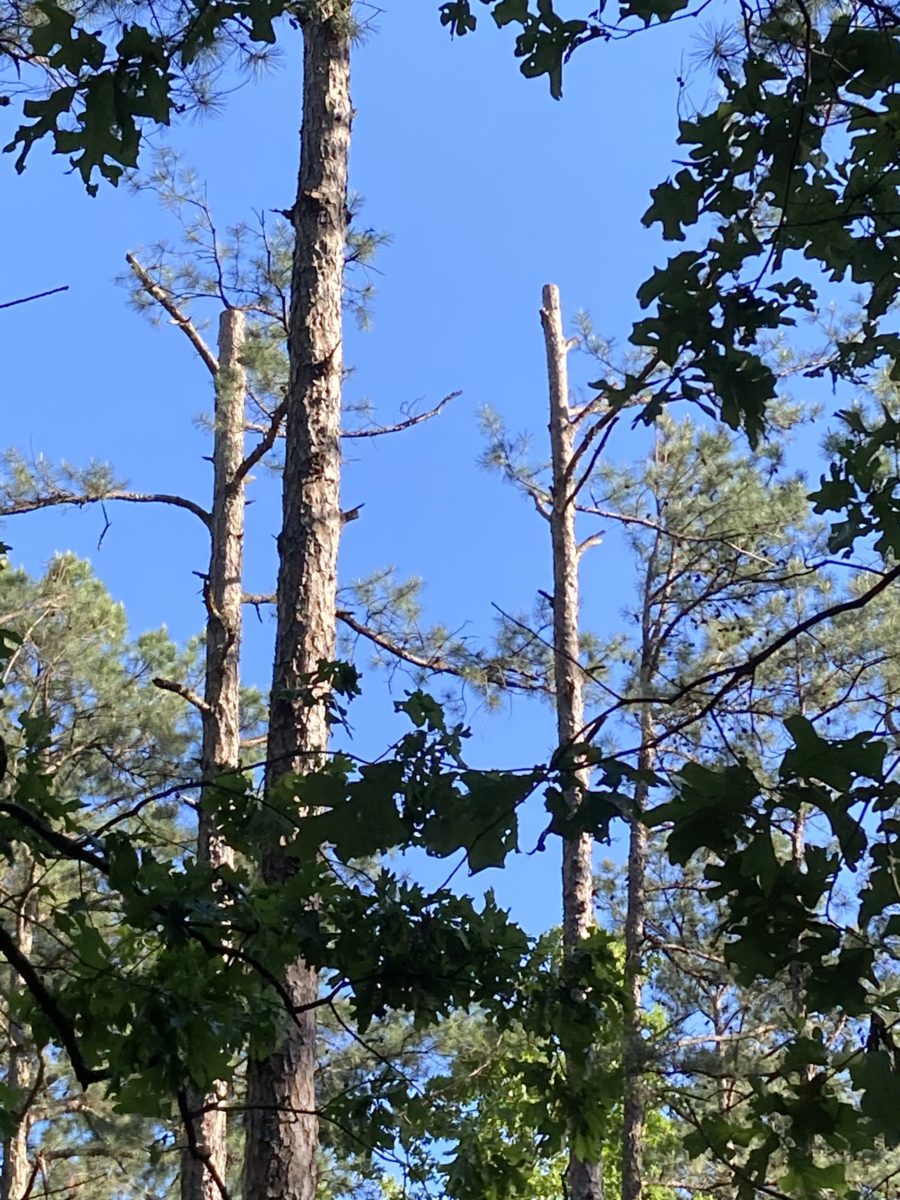 TREES TOPPED: Photo from a Lake Maumelle area resident complaining about tree trimming on water utility property in the watershed, she believes by a neighbor seeking to improve his view.

A friend shared this Facebook post about tree topping spotted on the forest land between lakeview homes north of Lake Maumelle and the lake, water supply for Central Arkansas Water.

As it happened, I was already aware of the unhappiness spreading among neighbors. Central Arkansas Water is fielding numerous complaints and sent an employee to investigate and found that the tree work had occurred on waterworks property as well as through the trail easement. Legal action is apparently being considered.

Residents believe they know which landowner is responsible for the damage to trees, an owner of one of the homes on Spillway Drive, It runs along a ridge north of the lake and dam spillway and above the Ouachita Trail, which follows a course at a lower elevation and closer to the lakeshore, as shown in this satellite image below.  The trail is the line along the bottom and Spillway the east-west road to the north. The red marker is at a point where Spillway turns almost 90 degrees to the west.

Neighbors and trail users have complained to Prosecuting Attorney Larry Jegley, who lives in the area; the sheriff’s office and CAW officials, who are reviewing potential action. I expect more to come.

UPDATE: I was shared one response from CAW’s watershed manager, Raven Lawson, to a complainant:

Thank you for your email. We appreciate the outpouring of concern and support regarding this matter. Please know that Central Arkansas Water is taking this VERY seriously.

Clean up will begin once the investigation is complete and a value of the trees can be determined. As we are very particular about our forest management practices, we will likely do the cleanup, but at whose expense if yet to be determined. Our contract forester estimates that between 75 and 100 trees were affected and because most were topped, they should be able to begin to regrow and fill in over the next 2-4 years. It doesn’t make this event any less destructive or less serious, but I’m a “glass half-full” kind of gal, and I hope that we can both seek justice for this event and that the ecosystem will recover to a point, we hope, that one day we barely notice what was done.

Thank you for helping us keep an eye on things along the trail and in the watershed. As we work to protect the nearly 25,000 acres of land and water resources owned by the utility, we rely on reports from the users and residents of these areas to help be our eyes and ears over the landscape. Please reach out to me any time you have a concern, as I, personally, appreciate the reports. And if there is an immediate danger or law being broken, call the PCSO or the AGFC immediately so immediate action can be taken.