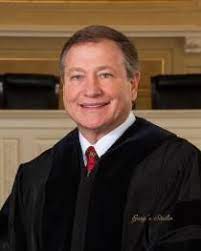 Arkansas Supreme Court Justice Robin Wynne, 68, announced today that he’d seek re-election to a second eight-year term. He’s previously served on the Court of Appeals and been a district judge and a prosecuting attorney.

His announcement said in part:

“I have enjoyed serving on the Supreme Court and hope the people of Arkansas
will elect me to a second term,” said Justice Wynne. “I believe my nearly twenty
years of experience as a judge, combined with my time in private practice in
Fordyce, allows me to bring a unique perspective to my service on the Court. I
feel it is important for Judges to be elected and I look forward to having the
opportunity to visit with the peo

His announcement notes that candidates run statewide in non-partisan races. The latter is true as a technicality, but in practical terms many andidates are positioning themselves as partisans.

Chris Carnahan, who’s twice been appointed to fill vacancies on the bench by the Republican governor and who’s a former executive director of the Arkansas Republican Party, announced earlier that he’d be a candidate for Wynne’s seat. He made the announcement in a letter — not to the voters of Arkansas, but to members of the Republican State Committee. He follows a partisan campaign path established by two other current members of the court, Rhonda Wood and Barbara Webb, wife of the former Republican Party chairman. Justice Shawn Womack is a former Republican senator and shows his party ties regularly. They use a litany of buzz words — family values, for example — as virtue signaling to what’s believed now a reflexive Republican vote majority in Arkansas. A Carnahan win will establish a four-member Republican majority on the seven-member court.

A good bet: Dark Republican money will flood into this race in support of Carnahan’s candidacy as has happened in past judicial races.

Also this week, Circuit Judge Cindy Thyer of Jonesboro announced that she’d be a candidate to succeed the retiring Judge Phillip Whiteaker on the District 1, Position seat on the Arkansas Court of Appeals, covering 12 counties extend from Lonoke to Craighead.

She’s been a circuit judge for 15 years, including two appointed stints early in her career, once by Gov. Mike Huckabee and then by Gov. Mike Beebe.