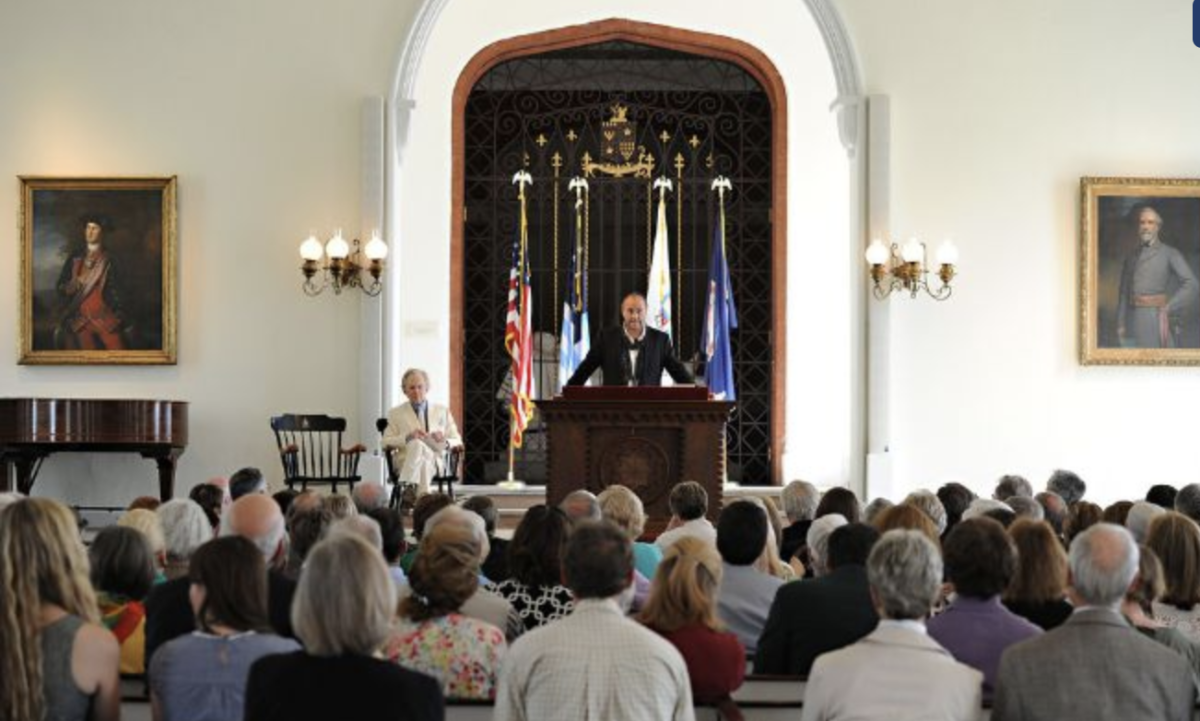 CHANGE COMING: To Lee Chapel, where a statute of Lee lying behind this speaker is to be walled off in the future. Images of Washington and Lee also are to be removed from the university diplomas.

Alumni of Washington and Lee University in Lexington, Va. (I am one) were just informed by e-mail that the University Board of Trustees had voted 22-6 not to change the name.

I’d been told last week that signers of a letter from some of the school’s biggest donors, including from Arkansas, had already been informed the name would not change. I have no reason to doubt the influence of money on the decision.

Faculty and students favored removing the name of Lee, a traitor to the Union, a cruel slave owner and Civil War loser. The pushback, particularly from older, male alumni and particularly from big money, was fierce.

The Board justified retention of Lee’s name for his role as president of a struggling institution in the years after Lee’s surrender in the rebellion. I won’t bore you with the historical unearthing of some of the myths about not only the war but also his leadership of the college and gentlemanly demeanor during his college years.

I came to fully favor the name change. I say this as a Louisiana native and descendant of Confederate soldiers originally drawn to the college in part by the Lee legacy, having been thoroughly inculcated by the Lost Cause PR of my youth.

Over the long run, I think the decision will prove short-sighted. I expect to be gone before a full evaluation can be done.

But who knows? Maybe the Arkansas legislature, with its devotion to preserving the Lost Cause, and the Confederate flag-waving insurrectionists and Trump supporters, are more indicative of where the country is heading. Maybe a period of restoring Lee statuary is to come. Maybe even secession.

I should note the W&L Board’s decision came with window dressing: Lee Chapel will be renamed University Chapel. It will retain the recumbent statue of Lee and his burial vault, but apparently, they’ll be walled off from portions of the building devoted to university functions. Founder’s Day will no longer be celebrated, on Lee’s birthday or any other day. Money will be raised to enable attendance by a more diverse student body. Board of Trustee members will become more diverse. And so on.

Oh, and they’re going to take the pictures of Washington (also a slaver) and Lee off the university diplomas.

The sops seem unlikely to bring the disaffected back into the fold or to entice more students of color to attend an institution named for someone who fought to preserve the institution of enslavement.

I await demonstrations of support from the winners for the stated repudiation of the campus’ role as a shrine of the Confederacy. I also look forward to their embrace of diversity. It hasn’t been evident lately in ugly responses to the hiring of a Black woman, Dr. Chawne Kimber, as dean of the college. She speaks bluntly about social justice, including in her artwork, much to the dismay of people of a certain political inclination.

In any case, I thought I’d close the chapter on the debate since I’ve mentioned the topic before. Also, the issues roiling there are very much alive all across the U.S. today.

For example, though I give these words less credit than actions, I wonder if an Arkansas state agency would be allowed to utter words issued by the W&L Board  today, given the Trent Garner Cancel Culture Act against talking about divisive racial topics: