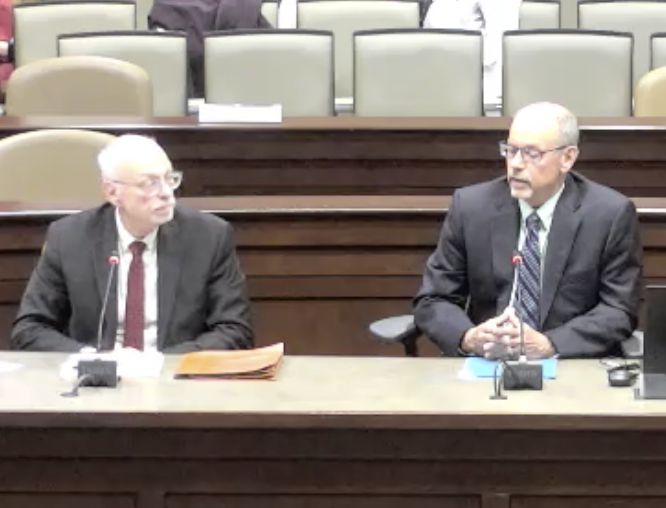 If you can stand it, you might want to cue up a legislative committee meeting this morning at which legislators raked University of Arkansas officials over the coals for Chancellor Joseph Steinmetz’s decisions on campus honors for Sen. J. William Fulbright and, to a lesser degree, former Gov. Charles Brough.

Steinmetz has recommended keeping Fulbright’s name on the colleges of arts and sciences, but to move Fulbright’s statue from Old Main to a place where more context could be provided on his record, including his opposition to civil rights. He defended the process that led to the decision and UA System President Donald Bobbitt praised Steinmetz’s handling. The UA Board of Trustees must ratify the decision.

Sen. Alan Clark blamed the university for changing students’ outlook. They aren’t concerned in his district, he said, but seem to get changed after going to the “ivory tower.” He also compared moving Fulbright’s statue to the Taliban blowing up a religious shrine in Afghanistan. He railed about “cancel culture.” Sen. Trent Garner objected to Steinmetz’s description of the “pain” students experience. He scoffed at people getting hurt feelings from walking past a statue. Rep. Jack Ladyman wasn’t happy about the recommendation to remove Brough’s name from a dining hall (Brough’s tenure was tarnished by his role in the Elaine Massacre on the side of troops who slaughter Black people.) Sen. Jason Rapert, who’d opened the meeting quizzing UA officials about communism, said a “small group of loud and vocal activists have wasted your time.” He said moving the statue was “caving” to a minority. Rep. Mary Bentley said campus efforts to include people had the effect of excluding others. She mentioned Christians, though not with a specific explanation of how they’d been excluded. Sen. Mark Johnson, son of one of state’s most infamous segregationists, opened with a stemwinder on history and later said a new law he sponsored will require the university to get approval from a state board to move the statue. It would be a misdemeanor for a first offense to violate the law and a felony for a second offense, he said threateningly.

Here’s the link to the video.

At Rapert’s insistence, the committee meeting began with a prayer led by Bentley and the Pledge of Allegiance. The National Anthem was not played.

The UA’s time on the hot seat continued with berating led by Sen. Ron Caldwell over  the University of Arkansas’s continued work to comply with a contract to sell land in East Arkansas despite a new state law prohibiting the sale of the land. The UA said it is required to comply with a contract to sell the land. Caldwell and others took great offense, citing the law and resistance to providing the required federal waiver of change of the land to private use from Sen. John Boozman.

UA’s lawyer JoAnn Maxey suggested the buyer could go to court to enforce the contract and there were constitutional issues that could be raised. UA officials said they are trying to work out a resolution of the issue that “will satisfy everybody.”

The UA Division of Agriculture has a deal to sell 6,300 acres of its Pine Tree Research Station in St. Francis County to Lobo Farms LLC and use the $17 million for other agricultural research. Caldwell has opposed the sale of the land, which is a popular spot for hunting and fishing.

UA officials were accused of being “arrogant.” Clark told Bobbitt, who said the issue was complicated, “I don’t think you are feeling our pain.” It was intended as a snark about earlier comments about those who feel pain over the Fulbright statue.

Caldwell said the UA doesn’t have a valid contract for sale of the land. Maxey said that would be for a court to decide. She said UA was trying to “untangle” the issue, the suggestion being perhaps the potential buyer would be willing to withdraw from the deal.