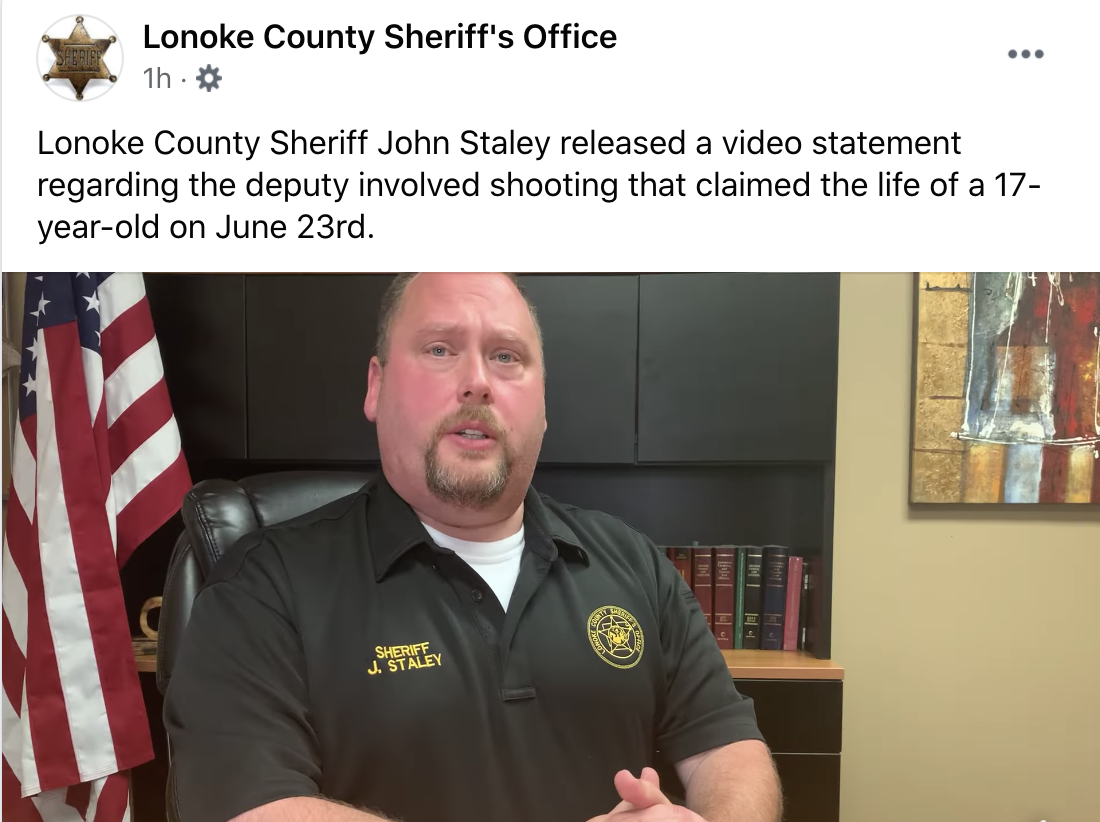 Our news partner KARK reports that Sgt. Michael Davis has been fired by the Lonoke County sheriff for violation of the policy on use of body cameras.

It was not activated when he shot and killed Hunter Brittain, 17, who was unarmed when Davis stopped him on a state highway near Cabot. Brittain’s family and a companion that night said he held only a jug of antifreeze that he intended to put behind a wheel of his truck to keep it from rolling. He’d been test-driving the truck following work on his transmission about 3 a.m.

It had been reported previously that Davis had a body camera, but no video had surfaced. Brittain’s family has hired lawyers who represented George Floyd’s family after his murder by Minneapolis police in seeking more information about his death.

The State Police is investigating and has said it won’t comment during the course of the investigation. From KARK:

In a video release from the sheriff’s office, Sheriff John Staley said Davis violated department policy by not having his body-cam turned on at the time of the incident that ended with Hunter Brittain’s death.S taley said he had issued body cameras to his deputies with the directions that the cameras had to be activated before encountering any member of the public before taking any official action.

He continued to say that after his review of the deputy’s actions the night of the shooting, he did not believe Davis activated the body camera “in a timely way,” meaning that while footage was captured after the shooting, there was no video of when the shooting itself happened.

Staley said the decision on whether Davis acted legally in shooting Brittain was to be made by State Police and prosecutor, not his office. But he said he could act on the failure of Davis to follow policy. He said social media had been “blown up” by “out-of-state activists” and threats had been made against his agency, including killing and raping family members. He said those threats were crimes and were being investigated.

Nationally renowned civil rights and personal injury attorneys Ben Crump and Devon Jacob issued the following statement following the firing of Sergeant Michael Davis in the fatal shooting of Hunter Brittain.
During the early morning of June 23, Officer Michael Davis shot and killed unarmed 17-year-old Hunter Brittain during a traffic stop. According to witnesses, Davis’s vehicle would not shift into park, so he exited the vehicle to put a large bright blue plastic bottle of antifreeze behind the wheel to prevent the vehicle from rolling towards the deputy’s vehicle. Inexplicably, Davis shot him three times.
In violation of department policy and training, Deputy Davis did not activate his body camera until after the shooting.
Attorneys for the family released the following statement:
“The horrific killing of Noah “Hunter” Brittain, an innocent 17 year old boy who had his whole life ahead of him, points to the urgent need for increased training and policy enforcement in every police department across the nation. Vehicle trouble should never end with a teenager being shot dead by police. Lonoke County Sheriff’s Office did the right thing by terminating former Sergeant Mike Davis when they learned that he failed to activate his body camera during the traffic stop. Body cameras are, in the overwhelming majority of cases, the only way to see the unbiased facts surrounding a police and civilian encounter resulting in injury and/or death. When officers turn their body cameras off, they turn off their intent to be transparent along with it. While nothing can bring Hunter back, our team stands in solidarity with the Brittain family, and we plan to help them attain full justice for the heartbreaking and preventable loss they are experiencing.”