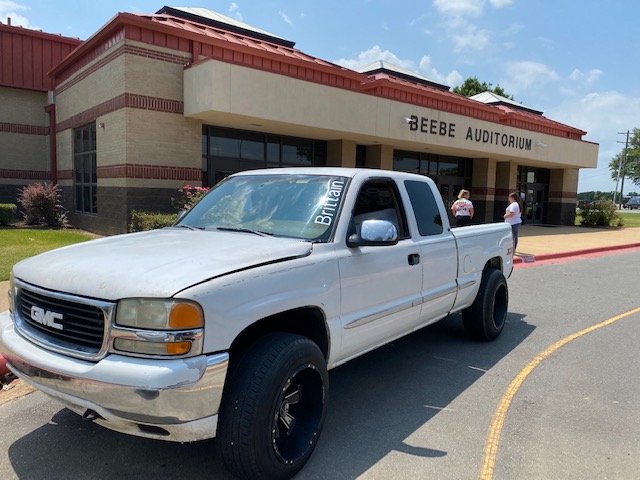 Arkansas Times photographer Brian Chilson provides coverage for the funeral for Hunter Brittain at Beebe High School, where most seats in the auditorium appear to be taken.

The pickup he was driving the night he was shot by a Lonoke deputy after a traffic stop was parked outside.

A prayer from his pastor opened the remarks. Then friends spoke. “…smallest friend with biggest balls,” said one. “Justice for Hunter.” The cry would be repeated.

His uncle, Jesse Brittain, said the family wouldn’t stop advocating until there was justice for Hunter and he also invoked “unjust killings” by police around the country. Qualified immunity for law officers must end, he said, to an ovation. He urged all to unite behind “equal justice for all races.” 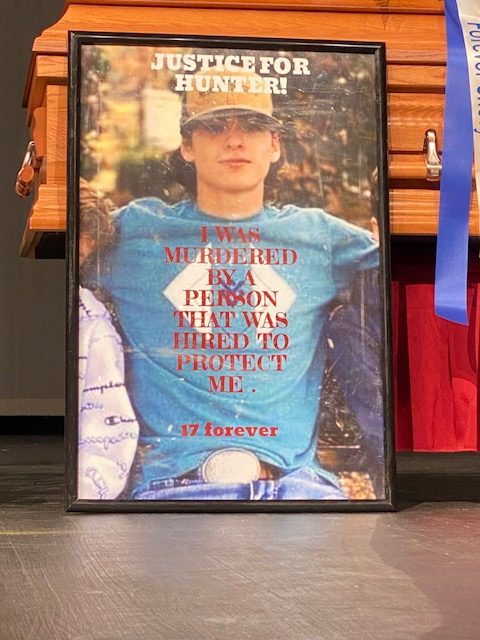 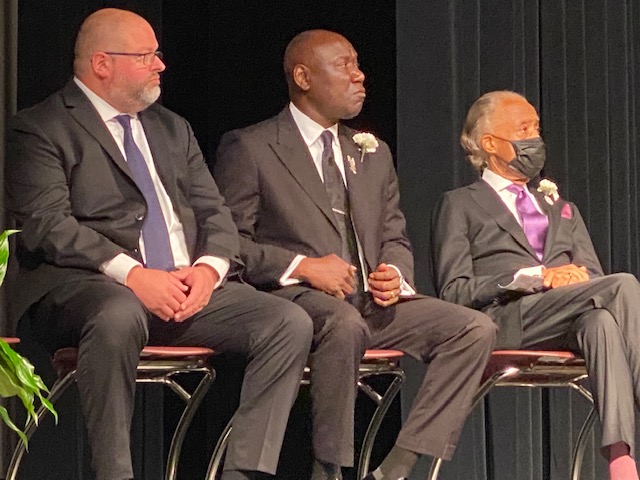 Devon Jacob, who’s been a lawyer for George Floyd’s family, said racism is sometimes an element in police shootings. But sometimes it is a failure of training, as with the shooting of Brittain by an officer who didn’t turn on his body camera. He said national standards are needed for policing and accountability. If the Senate won’t pass reform legislation, then more pressure should be put on the president if the legislature doesn’t act. He listed police victims — Black, white and Chinese — laid at the president’s feet. “It’s only with changes we’ll have some measure of peace.”

Crump invoked other police slaying cases he’d joined — George Floyd, Breonna Taylor, Christian Hall and Hunter Brittain. He said each one of their lives (by name) mattered. “We came here today to proclaim in unity that America, President Biden, the governor of Arkansas and people all over the world will stand up with us and say Hunter Brittain’s life matters.” He led the audience in repeating the chant. He urged them to say it loudly, so his grandmother with a hearing aid and Brittain in heaven could hear. 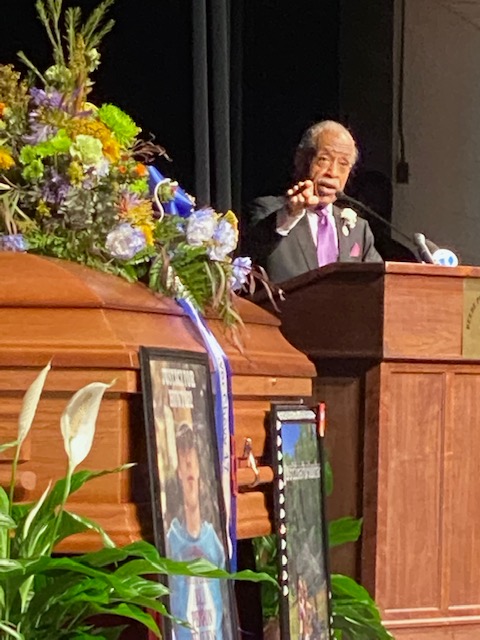 Sharpton recounted Crump’s call inviting him to join the Brittain case. He said it might be controversial. He told Sharpton it was a white young man. “Then I said. ‘We must go. The issue about policing is not about black and white, it’s about right and wrong.”

He added, “We don’t just come for one race. We come for what is right.” The mostly white audience applauded.

He said he didn’t know what contributed to Brittain’s death — race, class or other reasons — but he was shot down without due process and considered guilty until proven innocent. And he said if the deputy had enough time to shoot, “he had enough time to turn on the body camera.”

And, yes, Sharpton said, he is seeking publicity. “I want the whole world to know the name of Hunter Brittain. And if my coming can bring some publicity, then that’s what I’m supposed to do.”

He turned, too, to the Bible, with the parable of the Good Samaritan. You are not tested by helping those that you like or know well, Sharpton said. 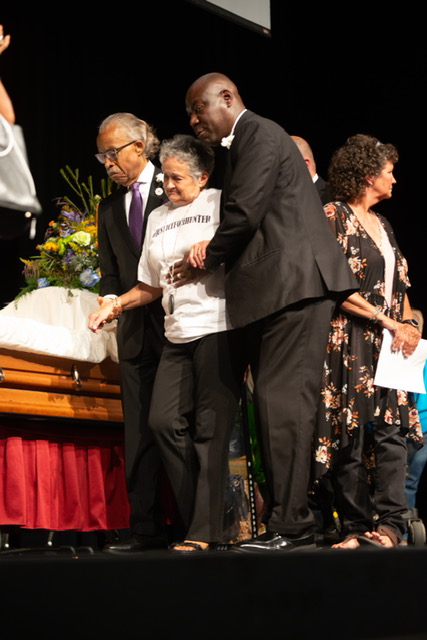 Sharpton said that he hoped that when his day of judgment arrives, “when they list the things that I might have done wrong, that Miss Becky might stand up and say he came from a different race and a different time and he stood up for my grandson, like the Good Samaritan.”

He said there might be a message in the anti-freeze bottle. That the world needs to melt frozen hearts that “separate us.” Maybe, said, Hunter Brittain is calling for some “anti-freeze.” He closed, to cheering, “It’s anti-freeze time.” 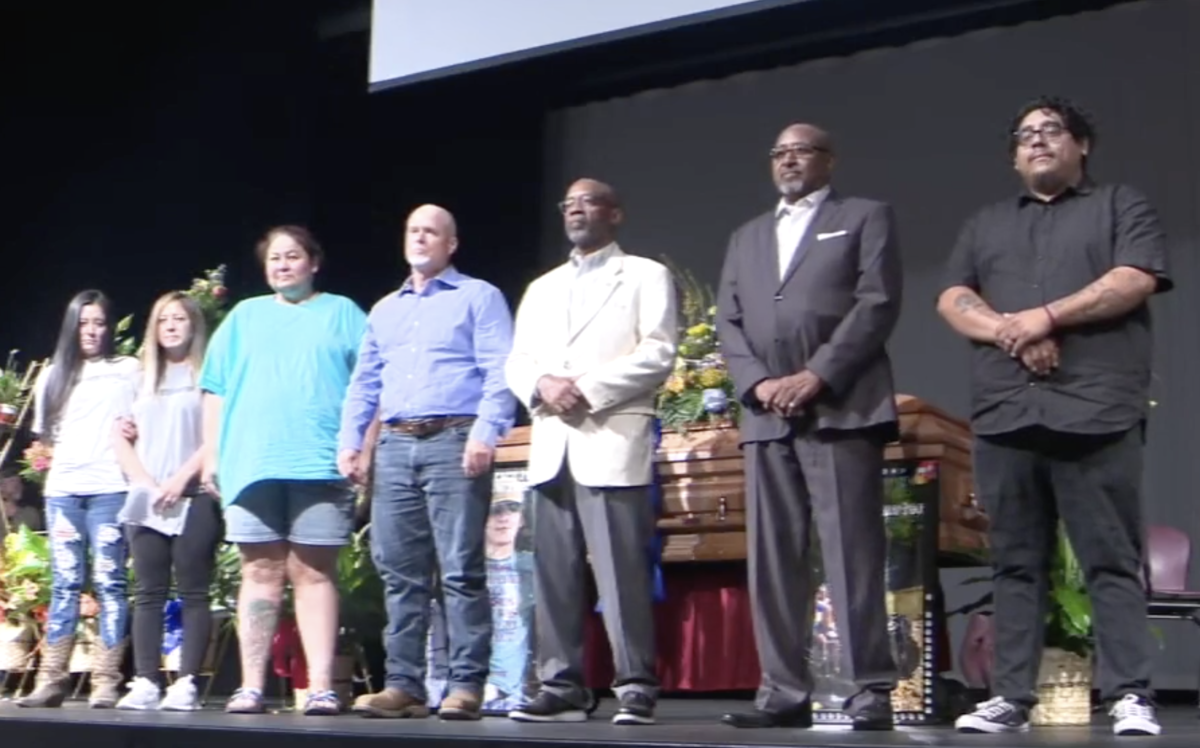 The service closed with a prayer as people of different race and heritage and gender stood before Brittain’s coffin. “This is what the family of God looks like,” said the preacher. People then streamed past the coffin. 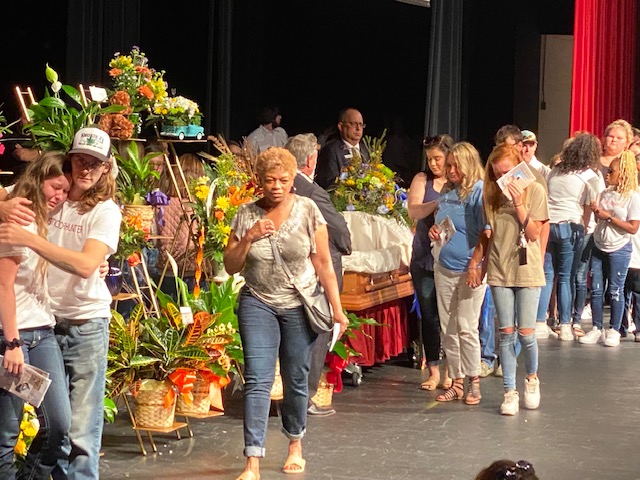 UPDATE: Brian Chilson provides a sour note on what was an uplifting funeral, devoid of calls for anything but justice, unity of races and professional policing. Some self-styled militia took it upon themselves to post a guard outside the Lonoke sheriff’s office. Bozo time. 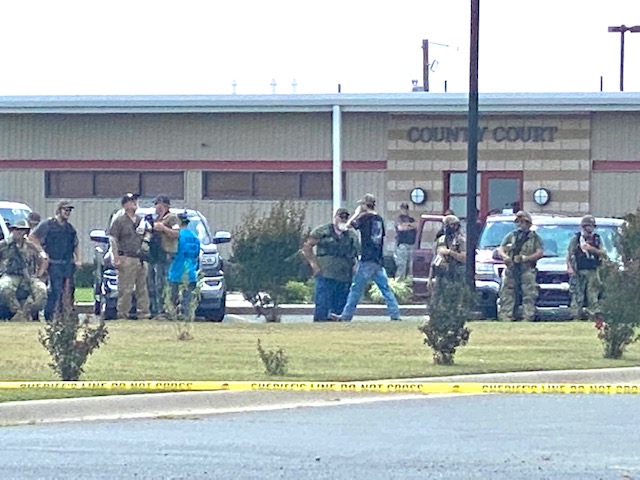