Deb Aikat, a journalism faculty member at the University of North Carolina, sent me today a newsletter that rounds up continuing reporting on the debacle surrounding an attempt to hire Pulitzer Prize winner and UNC graduate Nikole Hannah-Jones as a distinguished professor.

(CORRECTION: I wrote incorrectly that the newsletter had just begun. Aikat started his Lux Libertas newsletter in August as a means of fostering community and compiles  articles of interest on a variety of topics, including the pandemic. You can write him at da@unc.edu if you’d like to be added to his mailing list.)

The opposition to Hannah-Jones from conservative Republicans was fierce, particularly from Arkansas Democrat-Gazette owner/publisher Walter Hussman, whose name was given to the J-school following his promise of a $25 million gift. (How much he’s given so far has not been revealed.)

The UNC Board ultimately voted to give Hannah-Jones the tenure she expected. But under the circumstances, she said she didn’t want to work at a place with  Hussman’s name attached. She has taken instead an offer to teach at Howard University.

So it’s over? No, as a long list of articles Aikat provided today illustrates.

Black students at UNC are complaining about a lack of faculty diversity and are continuing to protest treatment by campus police when they appeared at the recent Board of Trustees meeting. AN NAACP demonstration is scheduled for Monday. The 1619 Project creator has drawn national media attention, such as this ABC report on her comments on the lack of racial equity in higher education. Political influence over education generally is getting deserved critical attention. (Not so much in Arkansas, where Republican legislators are spraining their arms with self-back-patting for prohibiting talk of racism in the public arena and treating University of Arkansas leaders like indentured servants for a sympathetic response to complaints about campus tributes to a racist senator.)

But if journalism is local, I’ve buried the lead. The local angle on the continuing controversy is highlighted by the Raleigh News and Observer in an opinion column today. The display tells our story: 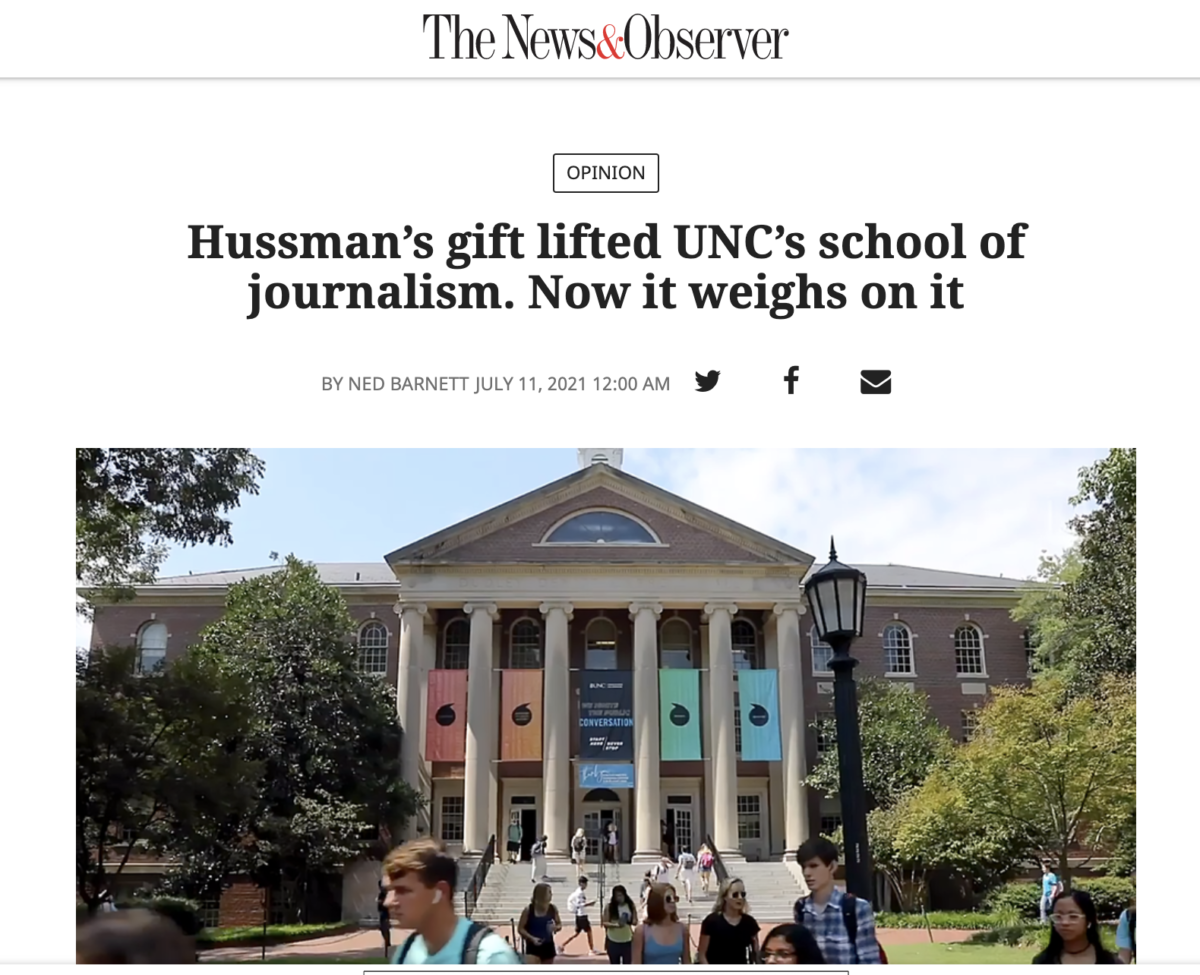 One of the reasons Nikole Hannah-Jones turned down a professorship at UNC’s Hussman School of Journalism and Media could be a problem for its future. The prominent Black journalist said she couldn’t work at a place named for the man who told UNC leaders that he doubted her suitability. Hussman was bothered by Hannah-Jones’ connection to ”The 1619 Project,” a New York Times special report that expressed controversial views on the roles of slavery and race in U.S. history.

Hannah-Jones has moved on to teach about race and journalism at Howard University. But Walter Hussman Jr. – who pledged $25 million to the journalism school and had it named for him in 2019 – is still very much a presence in Chapel Hill. Not only is his name on the school, but his core values of journalism centered around impartiality and objectivity are prominently displayed – and were expected to be engraved – at the entrance of the journalism school.

All this raises questions. If Hannah-Jones couldn’t work under the Hussman banner, will other journalists of color want to teach there? Will minority journalism students be drawn to a university where a key member of the Board of Trustees held up giving tenure to a Pulitzer Prize-winning Black journalist after all her white predecessors in the teaching post received it?

The article says Hussman was once asked whether removal of his name would affect his financial commitment and he was quoted as saying: “I don’t think any purpose would be served by me speculating about such a hypothetical.”

It may not remain hypothetical.

Rick Edmonds, a media business analyst at the Poynter Institute, did get Hussman to discuss Hannah-Jones’ decision last week and wrote about it. He came away with a sense that Hussman feels he prevailed in the controversy and has no regrets. But, Edmonds said, “I think there is kind of a collision course in that his name is still on the school.”

Deb Aikat, an associate journalism professor at UNC, said the collision is already occurring. “A lot of faculty are angry. They do not want Hussman’s name on the school anymore,” he said. He added that at least one of the school’s leaders has stopped using the Hussman name when referring to the school.

The column continues into territory that I’ve plowed before — the false notion of “objectivity” that Hussman belatedly began championing after establishing a newspaper monopoly in Little Rock. The Raleigh paper quotes Columbia journalism dean Steve Coll, himself a Pulitzer winner.

“The problem starts with the word itself,” he said. “ ’Objectivity’ describes something that isn’t human. We are not objective.” He added, “I would emphasize fairness and being led by the evidence, not by your views.”

Ironically, following his views was Hussman’s misstep. Now few are objective about the champion of objectivity.

By the way, more reporting in the Raleigh paper Saturday on the critical moments in Hannah-Jones’ ultimate decision to spurn UNC. Of the three, one was Hussman’s intervention and continuing disparaging remarks about Hannah-Jones.

“It became clear to me at that point I couldn’t maintain my dignity and work for a school bearing his name,” Hannah-Jones said.