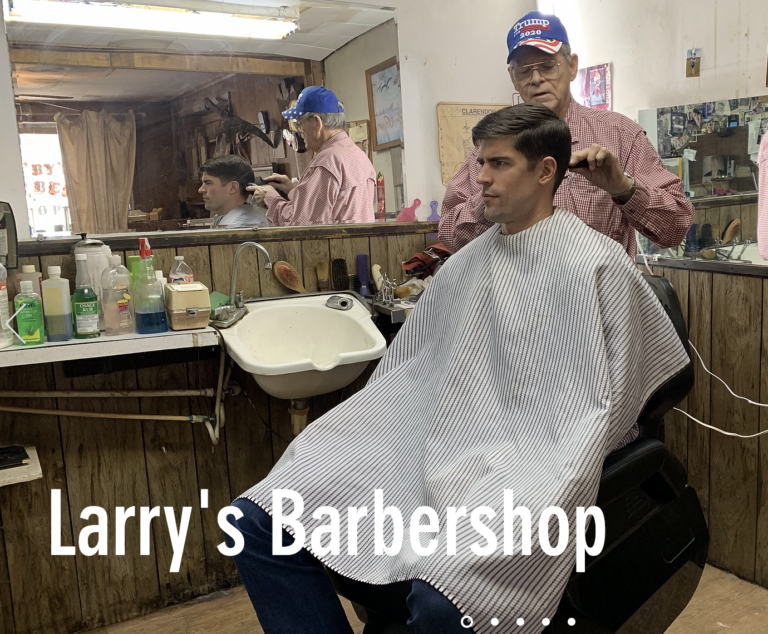 RUNNING FOR SENATE: Jake Bequette, getting a trim in a video he produced earlier this year touting his fund providing assistance for small businesses.

Jake Bequette, a former football player and Army veteran, has joined the Republican primary race for U.S. Senate, in which Senator John Boozman is seeking re-election.

I reported earlier this year on Bequette’s political groundwork through a philanthropic effort that mimicked one used by other Republicans, including Sarah Huckabee Sanders. The sources of financing for these efforts, which produce good publicity for the politicians, have not been disclosed.

Bequette has also been getting air time lately on Fox News for commentary on hot button issues (example: the hammer thrower who turned her back on the flag) and was featured this morning on Fox and Friends. The conservative Daily Wire trumpeted its “exclusive” on his candidacy with an interview studded with familiar Republican talking points — defund the police, Green New Deal, crisis at the border, critical race theory.

The news release I received didn’t mention his party affiliation, but a spokesman confirmed he’s a Republican — and a “Christian conservative outsider.” He’s the fourth Republican to announce for the seat, joining the incumbent, , (he dropped out), Heath Loftis and Jan Morgan. These Democrats have announced; Jack Foster, Natalie James and Dan Whitfield.

Bequette is a conservative outsider who’s running to fight back against the career politicians who have forgotten about the people they’re supposed to serve.

“Now more than ever we have to stand up and fight for what we believe,” Bequette said in his announcement video. “I’m a God-fearing Christian conservative who is 100% pro-life, and pro-police, and I will never apologize for being against illegal immigration. Like you, I’m sick and tired of the media lying, China getting away with murder, and politicians who only stand up for President Trump when they stand to benefit.”

Bequette continued, “I’m a Razorback, a patriot, and a veteran, and I’m running for U.S. Senate because it’s time to win our country back.”

“Arkansas deserves a difference-maker in the U.S. Senate who will stand up for Arkansas families and push the conservative change we need,” said Bequette.

Born and raised in Little Rock, Jake Bequette is a third-generation Razorback football player. During his time at the University of Arkansas, Jake was an All-SEC defensive end and an Academic All-American. He was then drafted by the New England Patriots and was a part of the Super Bowl XLIX championship team. After his NFL career ended, Jake answered the call to serve our country and joined the United States Army. Upon graduating from U.S. Army Ranger School, Jake deployed to Iraq with the 101st Airborne Division. Since returning home, Jake has launched The Arkansas Fund, a nonprofit organization that raised over $125,000 to help 37 small businesses affected by the pandemic.

Bequette’s video slams Democrats but also says some Republicans go along to get along and stand up for Donald Trump only when it benefits them.