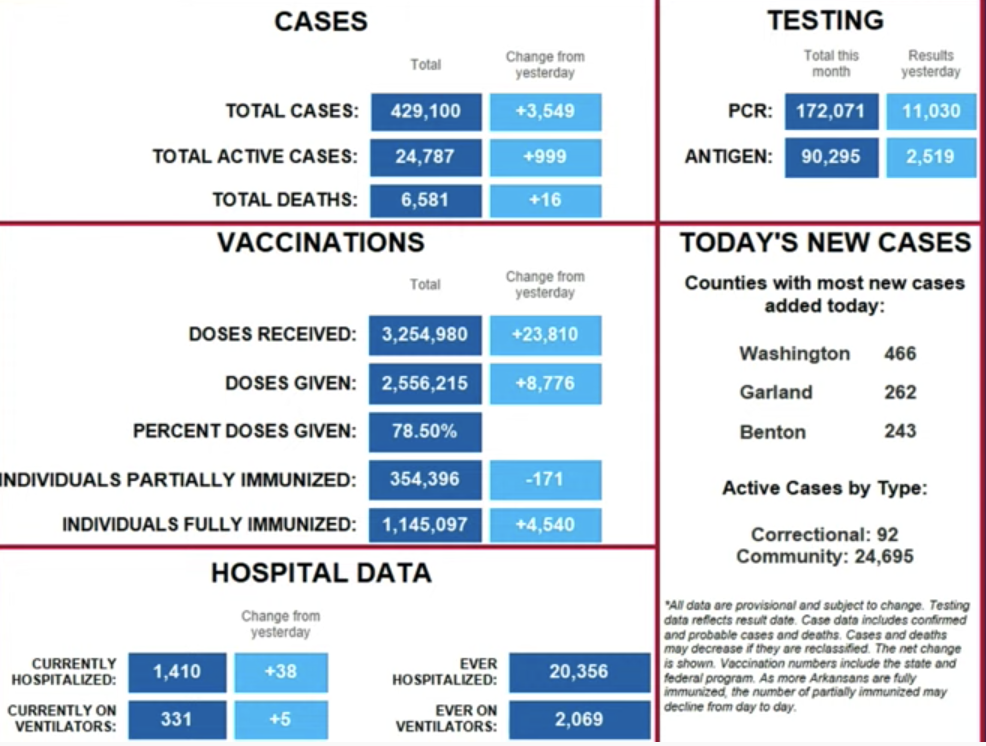 Governor Hutchinson’s weekly news briefing occurred on a day when there was no bright spot to be found in the daily COVID-19 data summary and he acknowledged the big jump in new cases is likely related to the start of school, a spike he said he’d hoped wouldn’t occur.

Before talking about the COVID crisis in Arkansas, Hutchinson opened with an invocation of a “military and humanitarian” crisis in Afghanistan. He said he hoped for the safe return of U.S. citizens and those Afghans who’d helped the U.S.

He said Arkansas would welcome Aghan people “who need a place of refuge.” He said, “We want to do our part and fulfill our mission and responsibility to those families.”

Back to COVID: The governor again emphasized that most of those hospitalized or who died were not fully vaccinated. The vaccination count was low today.

The governor said the state had sent high-filtration masks to all schools. He applauded school boards that have made decisions to follow CDC and Health Department guidelines on masks. Of 262 school districts, 118 districts — covering a majority of students in Arkansas — have adopted a mask mandate. 87 chose not to do so; the rest haven’t acted.

He said the state has reached a vaccination rate of 51 percent of the state’s population, a couple of weeks later than the governor’s July 31 target.

Health Director Jose Romero said he was encouraging those eligible to get the newly authorized booster doses of the COVID vaccine.

Deputy Education Secretary Ivy Pfeffer said there’d been a smooth start to the school year. All schools are open and none have modified offerings for now. She credited vaccinations and mask requirements with cutting down the need for quarantine and other measures. Many school districts are holding vaccination clinics, she said.

The Bentonville lawsuit challenging local mask mandates: It will wind up in the Arkansas Supreme Court, Hutchinson said. “In my judgment, the law that was passed had constitutional challenges … and that gave authority back to local school districts.”

What about districts that have no mandates: Hutchinson said he’d always advocated local decision-making and said districts might have different circumstances. There will be an opportunity to compare districts that did and did not adopt mandates.

Progress of contact tracing and case investigation: Tracers can keep up, a Health spokesman claimed.

The increase of cases with the start of the school year: That is thanks to data supplied by schools, Hutchinson said.  It’s too early for a spike related to students coming together. Romero said there’s no new single school with an outbreak.

Hospital space: He said there are now 23 open ICU spaces because of an expansion of space. “In the near future, I hope we’ll be in good shape.”

Availability of vaccine: There’s a 3.4-week supply of vaccine currently. At a peak, the state has only given out a two-week supply. The state feels confident it can handle the demand.

Testing students: He said the state is considering means to expand testing in schools. Negative tests can return students to school more quickly after they’ve been quarantined for exposure to an infected person.