If voters pass it on Nov. 9, a property tax increase that amounts to about $14 a year for a house worth $150,000 would go toward keeping the Central Arkansas Library System up and running for both in-person and online patrons.

The additional $2.375 million generated annually from the half-mill rate boost would keep new library branches and facilities clean and functioning and would bring the salaries of some library staffers, traditionally on the low side, up a bit. It would also help cover the surprisingly high costs of providing those e-books and audiobooks so many of us have grown addicted to in pandemic times.

Voters have not approved a millage increase for CALS operating costs since 2007, and since then the library system has added new libraries and expanded branches, all of which costs money, CALS Director Nate Coulter explained.

Those recent additions to the Central Arkansas Library System include Roberts Library (formerly Arkansas Studies Institute), added to the system’s flagship campus in 2009 to house the Butler Center for Arkansas Studies and the Galleries & Bookstore at Library Square; the Rooker Library in Otter Creek, added in 2011; The Children’s Library in 2013; event venue Hillcrest Hall, purchased by the library system in 2013; Ron Robinson Theater, acquired by CALS in 2014; and a new maintenance building added in 2015.

These buildings are paid for out of a different pot of money designated for construction, real estate and other capital expenses. Now, the operations budget must ratchet up to cover the costs of maintaining the additional facilities, Coulter said. “All those things obviously were great additions paid for by capital millage, but operations millage stayed the same,” he said. 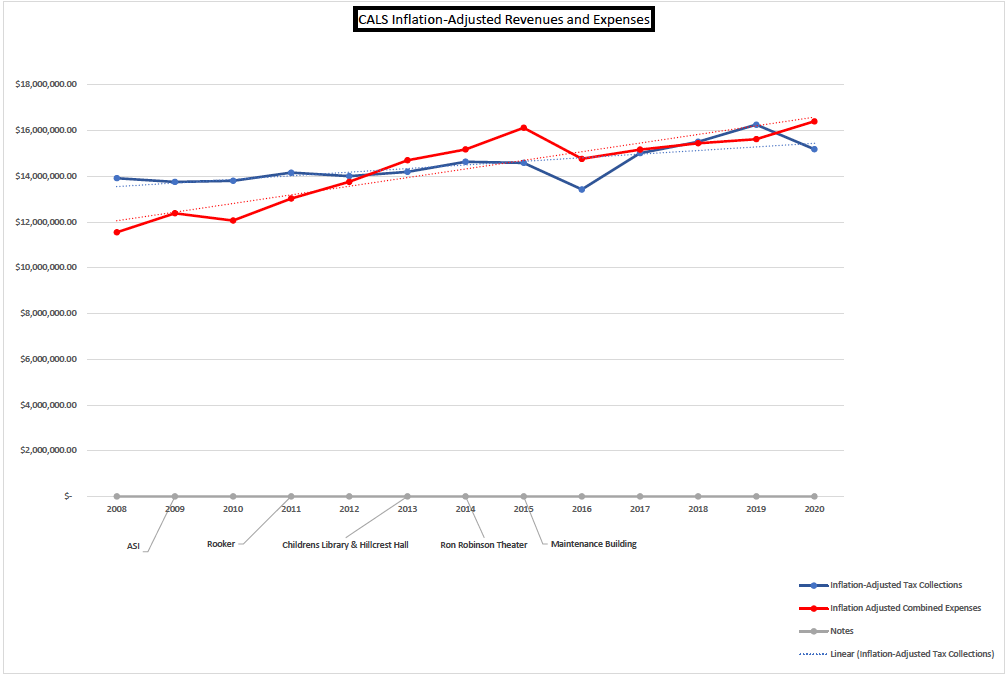 Should voters approve the increase, the millage rate for the library system will go from 3.3 mills to 3.8 mills. While the Central Arkansas Library System serves much of Pulaski and Perry counties, this millage rate affects only Little Rock residents. Most of the library’s assets are in Little Rock and much of the population within the system’s service area resides in the city, CALS communications director Tameka Lee explained. The library buildings in Jacksonville and Sherwood are owned and maintained by those cities, while CALS provides staff, services, programs, books and materials.

The proceeds from the millage increase would pay for print and digital materials, digital services and connectivity, sustaining a living wage for employees, covering the increasing costs of employee health insurance and tackling deferred maintenance.

The goal is for the millage increase to displace what’s been the library system’s go-to for cash, which is the refinancing of bonds.

“The temporary fix has been, through the years, let’s go refinance bonds. We want this to be a permanent solution,” Coulter said.

Proceeds from the millage would help cover the surprisingly steep costs of providing e-books and audiobooks. While libraries can buy regular books just once and circulate them until they fall apart, library editions of electronic publications are limited by time span or number of checkouts. For instance, the Central Arkansas Library System bought an electronic edition of the Pulitzer Prize winner “All the Light We Cannot See” for about $55, and library patrons can check the book out for two week intervals. But the $55 price tag only covers a 24-month span. After that, CALS will have to buy the book again. Some e-book prices cover only a certain number of checkouts. After 56 or so patrons have checked out an electronic edition, it runs out and the library has to purchase it again. Audiobooks are generally even more expensive than e-books.

How guilty do you feel right now for checking out e-books and audiobooks willy nilly and never finishing half of them? Coulter said not to feel too bad about any of that, because libraries have to evolve to provide patrons with the materials and services they want. For the Central Arkansas Library System, that means that in addition to electronic materials, patrons can check out toys, fishing poles, musical instruments, telescopes and even power tools. The trick, of course, is figuring out ways to afford an ever-changing menu of services.

“We’ve done everything we could to try to squeeze as much mileage out of current revenue as we could,” Coulter said.

The library system brings in some extra money by charging non-residents an annual fee of about $50 for check-out privileges. They’ve been conservative about adding new staff, but brought housekeeping and landscaping services in-house to cut costs. They hired an energy auditing firm to help them cut utility bills.