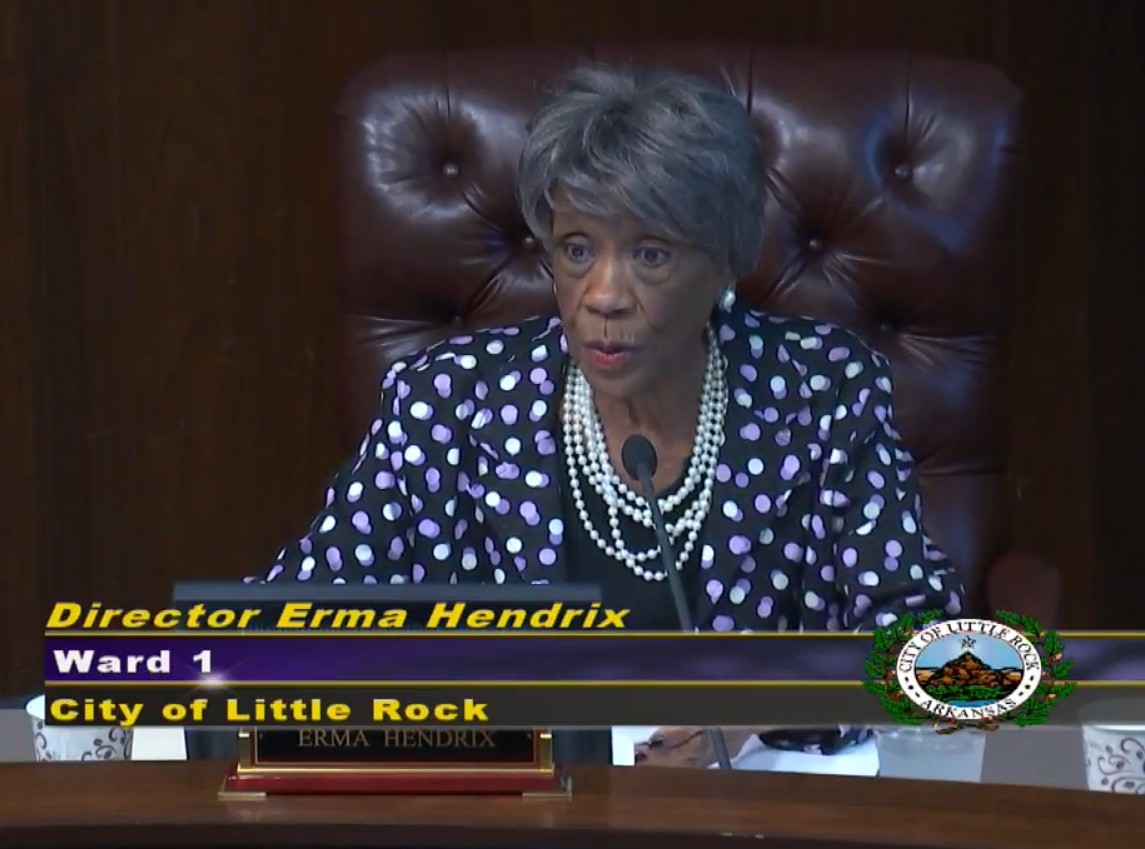 A member of the City Board since 2007 (she earlier served in 1993 and 1994) Hendrix charted her own course. She spoke out against this year’s sales tax increase, unhappy about some favors granted other directors for projects in her ward and about the distribution of the proposed spending in general. She was an outspoken advocate for racial equity, a position that sometimes took interesting turns. She opposed striping streets in her ward for bike lanes for example. She viewed bike riding as a hobby of better-off people.

A Little Rock public school graduate, she was a graduate of Arkansas Baptist College and held a master’s degree in urban planning. Her civic activities were many and varied, including a term as a member of the state Parole Board and leader of the Arkansas NAACP.

She could be irascible in public meetings, a trait I probably found more endearing than others on the receiving end. We managed, despite some policy disagreements, to remain in communication over the years. She and I agreed on the need for ward elections, to end the dominance of the board by special interests through the three at-large seats on the 10-member board. Her efforts to change that were rebuffed by the majority of the Board.

Her seat is on the ballot next year. She drew many challengers over the years but prevailed despite some ward critics. In 2018, she drew 2,426 votes against 930 for the next closest of six challengers. City Board members run as non-partisans, but Hendrix was a Republican, having once run for state House as a Republican candidate. The City Board will pick a person to serve out Hendrix’s term. That person is eligible to run for the seat in November 2022.

In one of her recent messages to me, a criticism of Mayor Frank Scott Jr. for  “succumbing” to a proposal by Director Dean Kumpuris on some matter or another, she commented:

As long as I am “Blessed,” with Breath, I will “Speak” as is appropriate.

That voice has been stilled.

Ruffin and Jarrett will be handling the arrangements, a funeral home spokesman said.

UPDATE: City government has issued a news release, which says in part:

“Today, along with the City Manager Bruce Moore and the Little Rock Board of Directors, I mourn the passing of Director Erma Hendrix. Director Hendrix passed away peacefully at her home Wednesday evening. I will always remember and be thankful for Director Hendrix’s passion for equity and justice and her love for serving the residents of Ward One for fifteen years. I know that it was a highlight of her life’s work to be the voice for the residents of Little Rock; I can remember her saying, ‘I’m not here for myself. I’m here for the people.’ She was a giant of a lady and one of our city’s pillars. Director Hendrix was like a grandmother to me, one of only a few people in my life to step in and provide the type of support a loving grandmother would. I’ll miss our talks and the sage advice she always offered. Please join me in praying for the Hendrix family’s strength and comfort during this time. The City of Little Rock flag will be flown at half-staff in her honor.”- Mayor Frank Scott, Jr.

“I was a young intern when I first met Director Hendrix. Over the years, I have admired her passion and dedication in representing the residents of Ward 1. Her voice will truly be missed.”- City Manager Bruce Moore