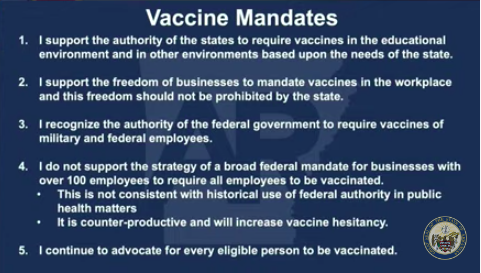 Governor Hutchinson’s weekly briefing began with another defense of his opposition to President Biden’s call for large businesses to require employees to either be vaccinated or tested regularly for COVID-19.

He said he supported the state’s ability to issue mandates and the right of private businesses to require mandates.  But he said he didn’t support a “broad federal mandate” on vaccinations. He failed to note that there is an option for testing under the Biden plan. The governor developed the chart to outline his position, which has drawn heavy criticism and comes as polls show popular support for vaccine rules.

He insisted that a broad federal mandate was unprecedented (George Washington’s requirement of a small pox vaccine was for his army, he said) and counter-productive. He said it distracts from his effort to encourage voluntary vaccination. He didn’t venture an explanation of why Arkansas has performed so poorly under his voluntary approach. Nor did he address, beyond acknowledging it, the legislature’s effort to prohibit even private businesses from requiring vaccinations.

He pitched the daily COVID statistical report as an improvement (a drop in the rate of new cases and hospitalizations) but acknowledged the “sad thing” of 36 more deaths. He tried to diminish this somewhat by saying the daily account is a compilation of deaths from several dates. But the rolling average death rate in Arkansas is far higher than the national rate, a similar rolling compilation. The daily numbers: 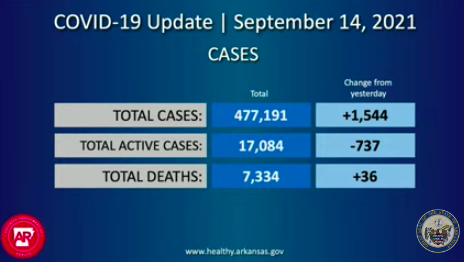 The vaccination report was lackluster but the hospital count continues downward. 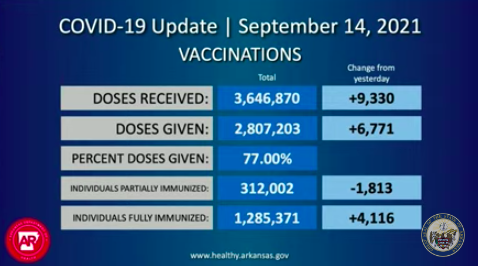 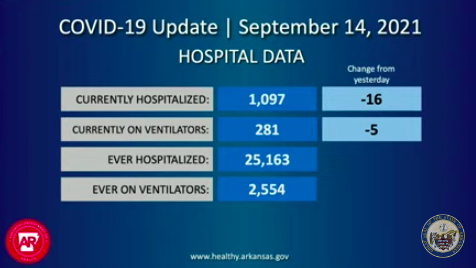 He reported a gradual increase in the number of units of monocolodal antibodies that have been distributed to treat people with COVID-19. It’s an effective program, the governor said.

He also showed that new case rates drop as vaccinations rise. Yes. A good reason to require them. 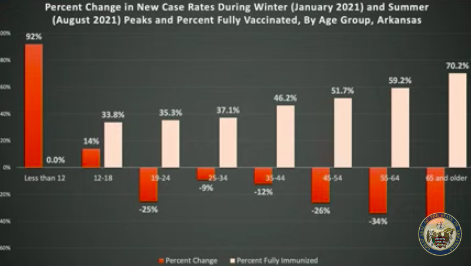 Education Secretary Johnny Key said three school districts have had isolated switches to remote schooling. He credited superintendents for making good decisions on “mitigation strategy.” He presumably refers to broadening use of masks. He said he’d urged districts to keep doing what they’ve been doing because there has appeared to be a recent decline in school cases.

Hutchinson was asked why not allow local governments to impose shot requirements if he believes the state may do this. It’s a matter of “confidence, timing and the right strategy for implementation.” He said the strategy for now is to “educate and encourage and solicit the support of the community.” He said that’s been “proven successful,” a fact belied by national statistics that rank Arkansas in the bottom 10 of the states.

He resisted saying when or if he might consider required vaccinations for school employees if the virus continues to increase for students. But he said an “effective leader” wouldn’t foreclose any future actions. He said he supported state authority but also acknowledged the state currently has none on vaccinations thanks to the legislature.

He was asked about the huge crowd swarming the field at the Razorback game. He said he hoped most were vaccinated and he noted some people had worn masks. He said he hoped the state’s suggestions “will keep us safe” in such venues. Romero said the impact of that crowd, if any, will take five to seven days for infections to become evident and longer for serious illness and death.

He said he wasn’t ready to declare the worst was behind the state, though he said he’s encouraged by recent trends of a gradual decline in cases. He and Key both indicated that mask mandates are having a positive impact in schools. The mask policies, for one thing, reduce required quarantines and that puts more children in school.

VACCINATION MANDATE CHALLENGE: He said he’d support an effort by Republican attorneys general to the Biden vaccination rule. But he said it was premature to evaluate a legal challenge until the rule actually is adopted.

WHITE HOUSE: Hutchinson said he talked with the White House today about the availability of booster shots. He said he anticipated them to be available at the end of next week, but the guidance on who may get the shots is not yet clear. He said he expected shots to be available eight months after the first shots and he said he’d be “first in line” when his time came. Health Director Jose Romero said the FDA still hadn’t made clear what suggestions would be on who is eligible.

RICE TO CHINA: The governor announced that Ralston Family Farms of Atkins has sold long-grain rice to China, the first Southern rice-grower to make a Chinese sale. Tim and Robin Ralston were on hand for the announcement.