The glossy black cat that dashed across the highway in front of us that muggy Saturday morning felt like the best possible omen, considering we were in pursuit of what most people would consider terrible luck. Armed with only bug spray, a picnic lunch and minimal knowledge about the elusive Bigfoot family of North America, my son and I barrelled toward Fouke in Miller County in hopes of crossing paths with the Boggy Creek Monster.

For nearly a century now, people in and around Fouke have reported sightings of a red-eyed, 7-foot-tall Sasquatch-type creature clomping around in the swamps, screaming through the forest like a lonesome bobcat and occasionally peeking out from behind trees to terrorize unsuspecting hunters.

Whispers about a monster roaming around in the brushy southwest corner of Arkansas started circulating in the 1940s, but got national attention in 1971 after Bobby Ford reported being attacked. Ford’s wife, brother and a family friend corroborated his story, and Ford went to the hospital for treatment of cuts, scrapes and shock. The family was scared enough to pick up and move away. Filmmakers retold the harrowing ordeal in the classic 1972 docudrama “The Legend of Boggy Creek.”

Sustaining a physical attack like the one that earned Ford and Fouke national fame was, of course, the ultimate goal for our trip, but we weren’t sure how to achieve it. Camping out overnight, possibly in a Lady Gaga-style meat dress, was our best idea. We chickened out, though, not from fear of the monster, but of the chiggers and mosquitos whose early September assaults were all but guaranteed. My 10-year-old and I prepared for the possibility that we might come up with nothing at all, and agreed we would be satisfied with some sightseeing and maybe, if we were lucky, a firsthand account from a local. 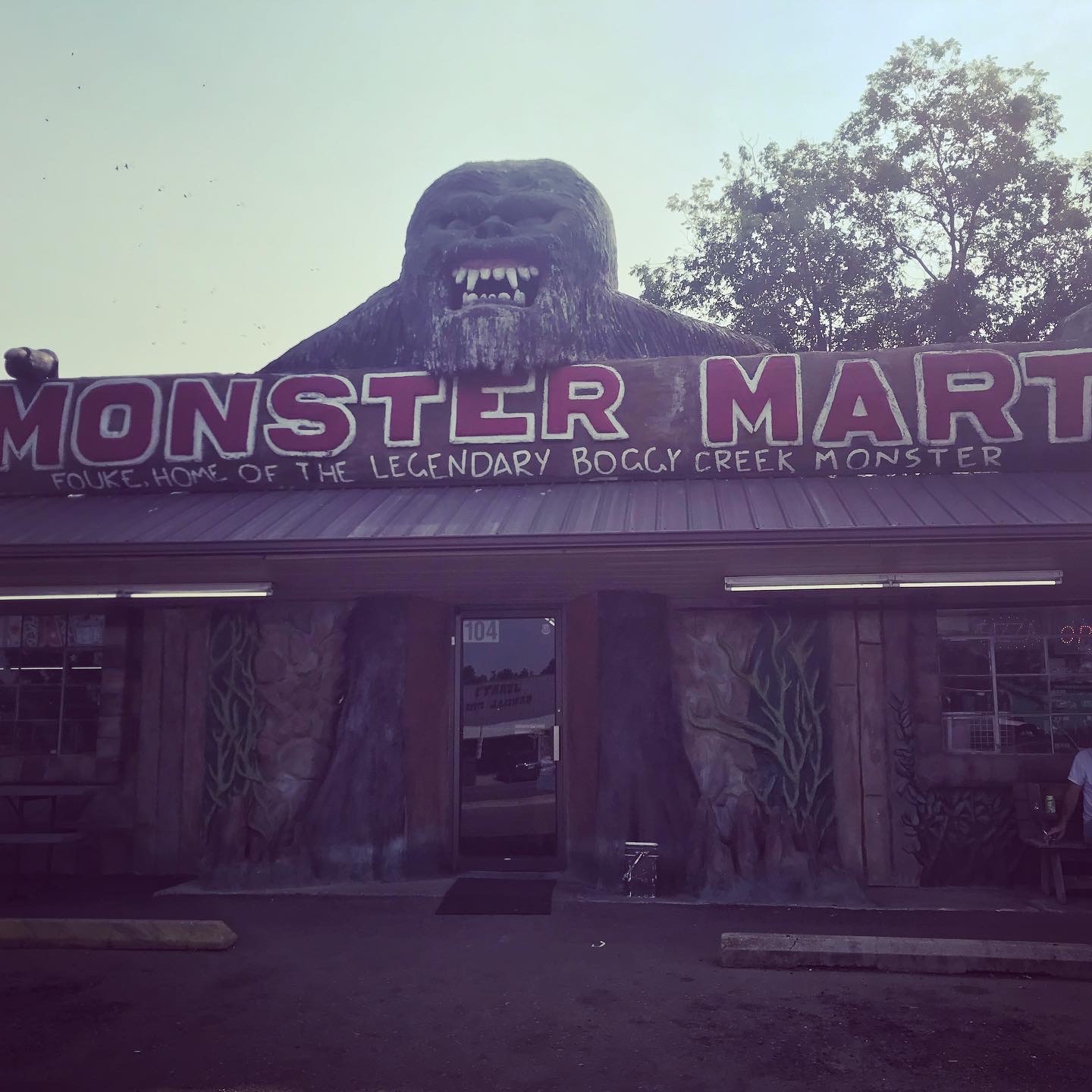 FIRST STOP: Get your provisions and some insider tips.

Most of the physical evidence that the Boggy Creek Monster is real lives at the Monster Mart, a hybrid gas station, snack bar and museum on Fouke’s main drag. Appropriately themed with a giant carving of the Fouke Monster traversing the roofline and murals and statues flanking the door, this locus of all things monster is the obvious first stop, especially since there aren’t many other places to go in this slow-moving town of 808 people.

The museum portion, with its casts of telltale three-toed footprints and a replica of the baby monster whose remains were found in the swamp, is a fine spot to wile away 10 minutes. But the opportunity to chat up native Foukers about their local mascot is worth the whole trip. Within 15 minutes of us rolling into town, strangers were pulling out their cellphones to offer up audio and photo evidence of the wood ape we came to see. 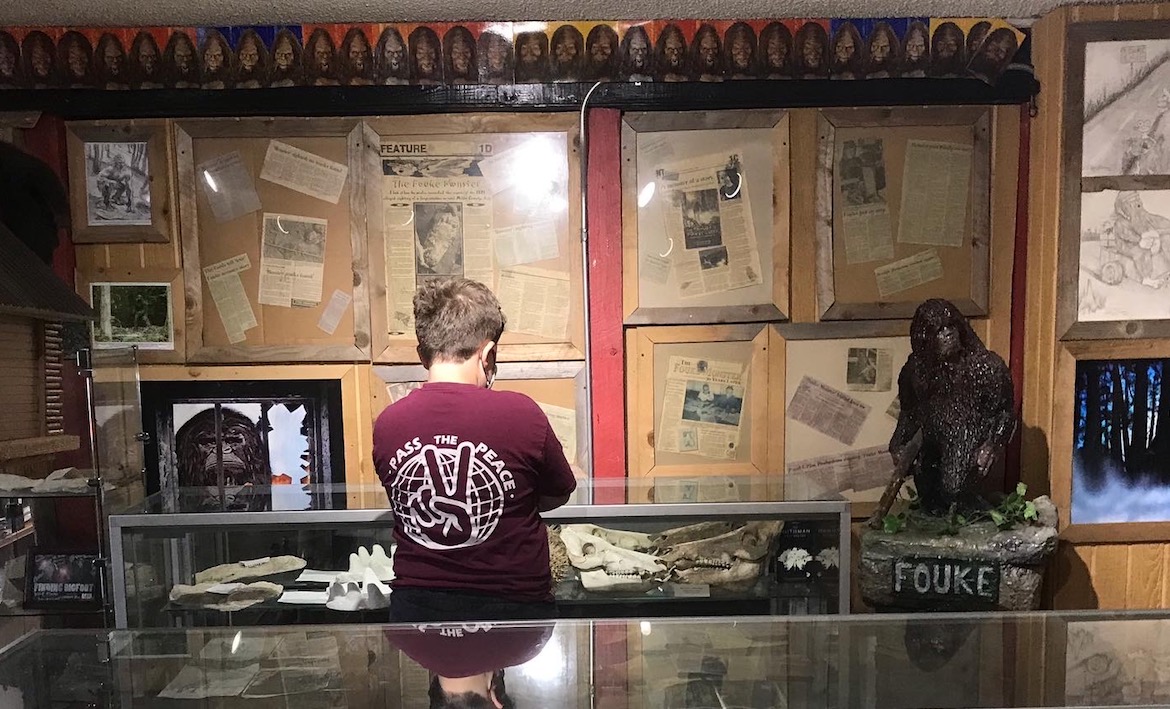 CONSIDER THE EVIDENCE: Casts of footprints are on display for your inspection at Monster Mart.

Shopkeeper Bridgett Story gamely pointed us to a paper map of Miller County on the wall, marked up with locations of the most recent sightings. She played us a clip of audio captured out in the woods of an angry howl in the wind. “I’m a skeptic,” she admitted, “but it makes my hair stand up.”

Her husband happened to be at the shop, too, sprawled out in full camo in a booth after an unsuccessful morning of squirrel hunting. And while he seemed like he would prefer to join his wife in the skeptics camp, he’s had a few run-ins that he can’t shake. There was the time he was out deer hunting by Horseshoe Lake and saw a grizzled brown face watching him. He looked over at his son, who was paying attention only to his phone screen. When he looked again, the face was gone. It was early in the morning, though, and Story wonders if he’d talked himself into it. “If you think about stuff, you’re going to see stuff,” he said.

But then there was the night the family went frog gigging on McKinney Bayou and ran into a wall of stink he described as “wet dog mixed with skunk.” He and his wife exchanged wide-eyed, knowing looks but said nothing about what they suspected was the source of the smell. “I don’t want my son to be scared to go out in the woods,” he explained.

Another man came into the Monster Mart, bearded, kitted up with a daypack and dressed head to toe in army green. Was he headed out in search of the Southern Sasquatch? Turns out he was just picking up some supplies, but he had some thoughts to share. The lack of leadership in this country is what we should really be scared of, he warned. “In 1963 when God, the Bible and prayer were taken out of school, that’s the real monster,” said the man, who asked to be identified only as Joe American, patriot. 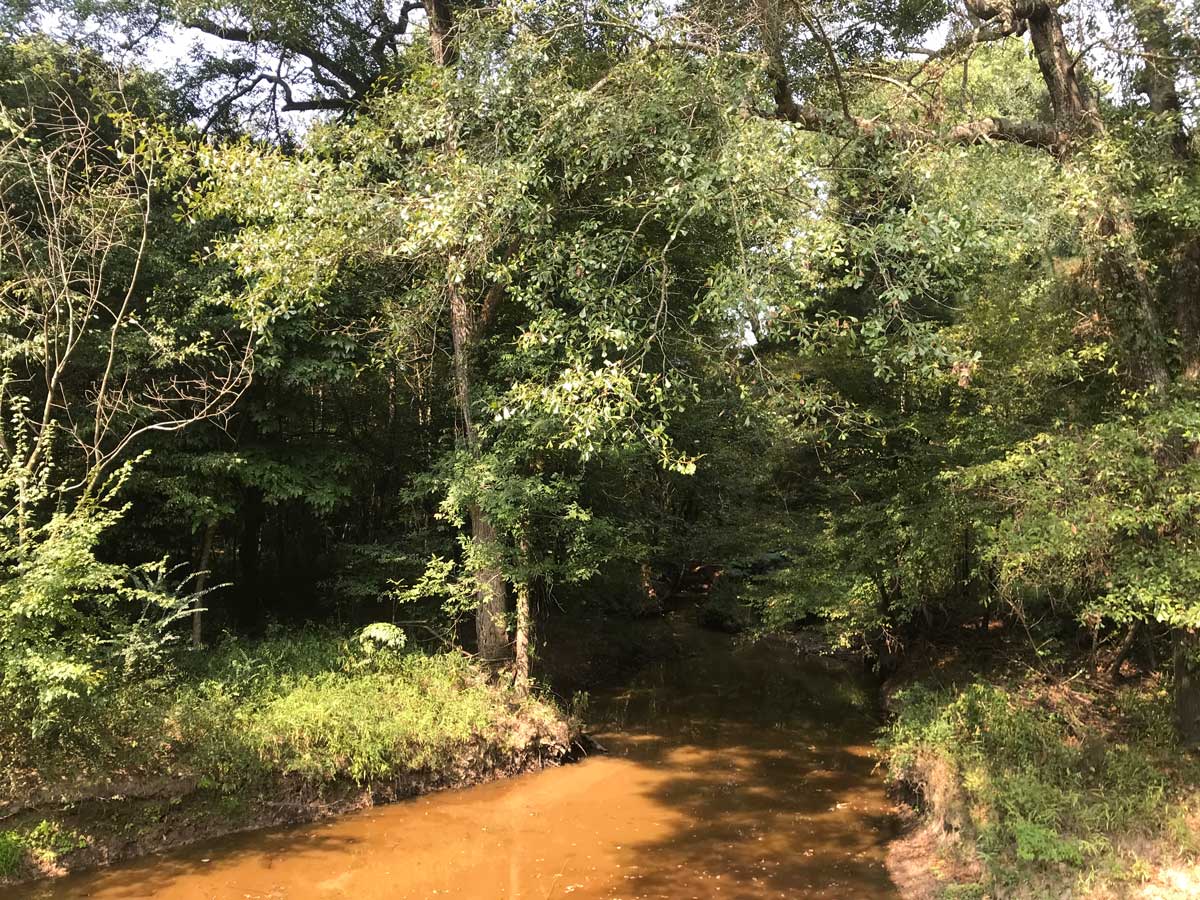 THE NAMESAKE: According to locals, Boggy Creek never succeeds in washing away the Fouke Monster’s infamous stink.

We left Monster Mart with a half-dozen packs of Nerds Ropes, a glow-in-the-dark Fouke monster T-shirt and one of those Wooly Willy-style magnetic toys, but instead of drawing beards and mustaches on a man’s face, you use the magnetic stylus to arrange fur on a naked Bigfoot. Chris Story had given us directions to a culvert where we could easily scope out Boggy Creek, now shrunken down to a muddy, sluggish channel in the late-summer drought. As we strained our eyes to see through the trees, three fur-covered creatures burst unexpectedly from the bushes, but they were only two hound puppies and a pug-beagle mix looking to join in our adventure. 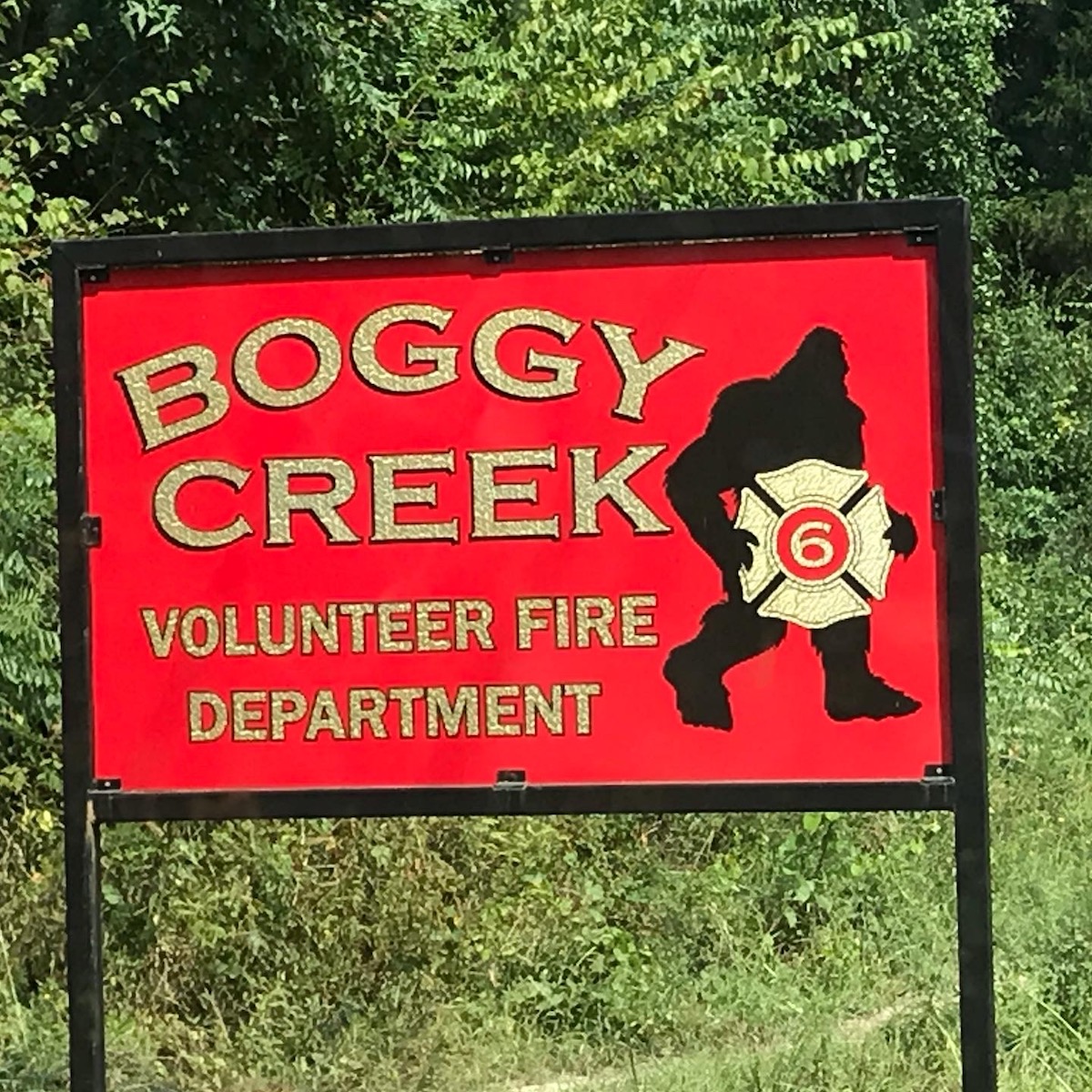 DETECTING A THEME: Seemingly everyone in Fouke has either seen the monster, or knows someone who has.

En route to Alex Smith Park, another monster-sighting hotspot, we drove into a cloud of funk that at first seemed promising but turned out to be only the fumes of a livestock event at the Cowboy Church. And while the park was a perfect picnic spot, with a broad lake bordered by cypress trees and dancing with frogs and turtles, the only other wildlife we spied were a blue heron and a tiny green-striped ribbon snake.

The scariest part of the day followed, when we found ourselves on backroads somewhere between Doddridge and Texarkana with a gas gauge near empty. Headed north toward home, we weighed the evidence and decided we fit in the same camp as the Story family. Maybe the Boggy Creek Monster is real, maybe it’s not. Regardless, you shouldn’t be afraid to get out in the woods.