A comprehensive analysis by grassroots political groups of the proposed legislative redistricting, set for final approval Monday, finds it politically and racially gerrymandered and in violation of legal guidelines.

The report to be filed with the board of apportionment is by the Arkansas Public Policy Panel and the Arkansas Citizens First Congress. It says counties and cities are unnecessarily split for political ends and the boundaries marginalize minority racial and ethnic groups in the process. It illustrates with detailed analysis of the 35 Senate and 100 House Districts.

Many proposed districts split existing political boundaries of city, county or other boundaries where they should be left whole. The senate map had 33 counties split 72 times and the House map had 53 counties split 135 times. These numerous splits affect nearly half of the total population of the state.

Many cities are divided as well, while communities of interest were ignored unnecessarily.

In the Senate, there are only 8 counties that require a split because their population far exceeds that number of people that are required to be placed in each district. If the map adhered to the wholeness criterion, a total of fourteen single county districts could have been created. Instead, the proposed map only has three.

These splits, particularly those that targeted minority precincts, were clearly drawn in the pursuit of disproportionate partisan advantage and marginalizing minority voters.

The Board stated that they prioritized the interests of minority voters, but this does not appear to be the case. The Board claims to have created 4 minority-majority districts and one minority-coalition district in the Senate — but they achieved that by packing high concentrations of minority voters into those districts even when it violated other guidelines.

In other places they cracked minority voter precincts to dilute the minority vote, again while violating other redistricting guidelines such as compactness or preserving communities of interest. They could have created many more minority-coalition and minority-opportunity districts while preserving more community boundaries.

Many proposed districts fail the compactness test — they are sprawling, needlessly complicated and, as mentioned above, divide existing city, county and school district lines without a rational basis.

The report says the maps also divide communities of interest and are highly partisan, but they DO generally protect incumbents.

The report contends the maps violate state and federal law on redistricting. It criticizes the Republican-controlled process, including the failure to hold a public forum after the proposed maps were issued. It recommends revising the maps and the groups offer proposed districts that they say are more in line with the law’s standards.

Governor Hutchinson and Betty Dickey, who guided the staff work leading up to the three-Republican vote scheduled Monday, have said some changes in the maps are possible, but they have declined to identify any of them. The governor has said he’d take questions AFTER the maps were approved.

A release with the analysis says the findings illustrate why Arkansas needs an independent, non-partisan redistricting process. Such a proposal was headed to the ballot last year but blocked on a technicality by the Arkansas Supreme Court.

“The proposal creates real-world challenges for Arkansas’ democracy,” said Bill Kopsky, Director of the Arkansas Public Policy Panel. “It creates uncompetitive elections where opportunities for voters to choose between highly competitive candidates are limited. This will lead to even more polarized and divisive politics.”

The ACLU noted yesterday that its analysis also found flawed the governor’s assertion of protection of minority districts, particularly the claim of a supposed majority Hispanic district in Springdale. The ACLU analysis says the voting age population in that district is not majority Hispanic and the registered voter percentage is only about 27 percent Hispanic. This district was drawn for obvious partisan purposes, to damage Democratic Rep. Megan Godfrey by removing areas that supported her heavily, including Hispanic neighborhoods.

Here’s the full analysis released today, with detailed comments on the proposed districts and suggestions for improvement.

The appendix with district-by-district analysis is fascinating. It illustrates who carefully political decisions were made, down to dividing precincts in some cases. The work describes seemingly “surgical” divisions of the cities in Pulaski County with racial outcomes in mind. The lines are similar to those used to carve majority-black areas out of the 2nd Congressional District to help Republican Congressman French Hill. The analysis also notes that Benton and Bryant were split when both could have been left whole. Repeatedly, the appendixes note splits intended to reduce the influence of non-white voting areas. See South Arkansas districts for several examples.

The bottom-line effect: Fewer competitive districts and more that are demonstrably Republican-leaning.

The alternate plans proposed (which of course won’t be considered) pass the “eyeball” test of compactness, fewer political divisions and lack of strange shapes. The Senate plan, for example: 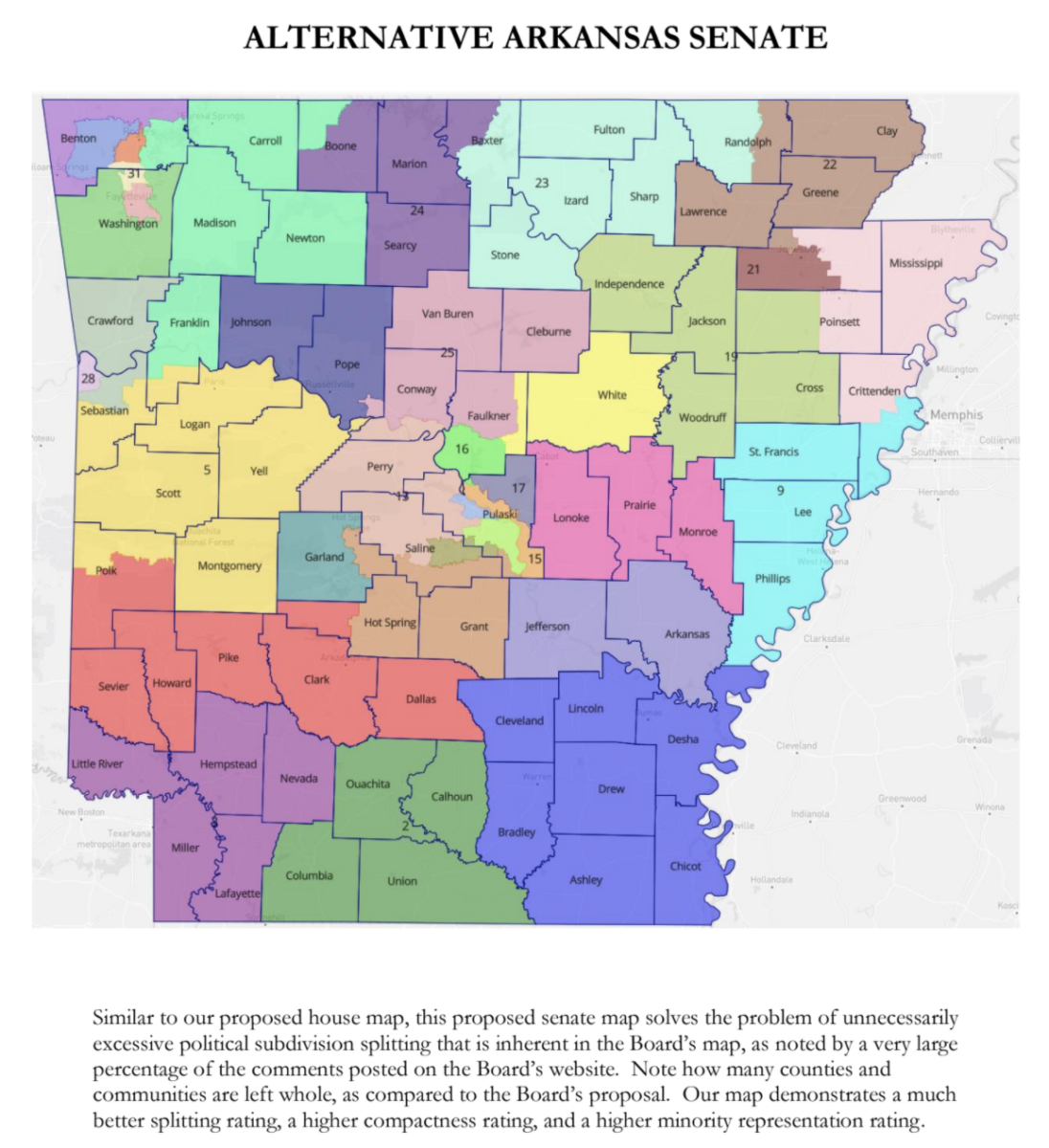