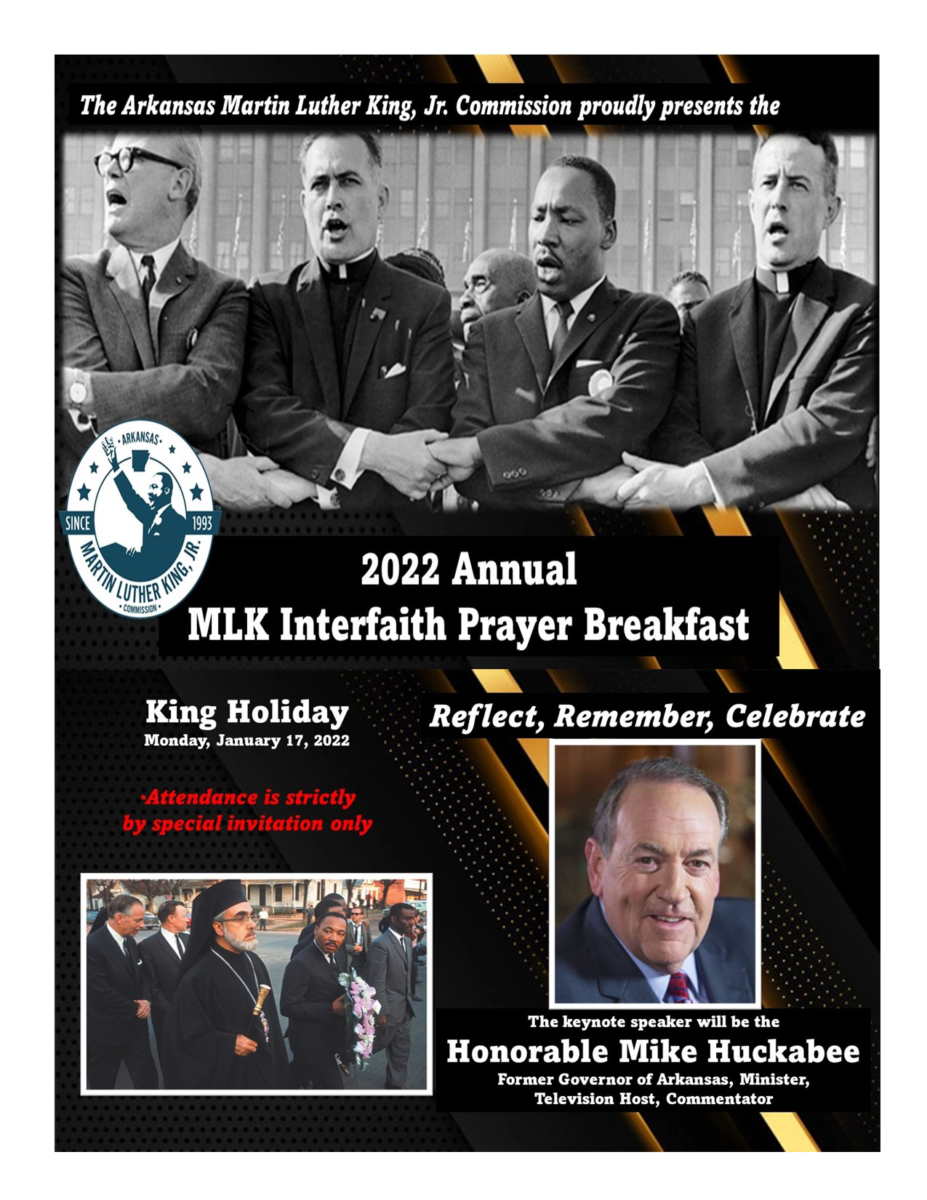 Criticism has erupted about the Arkansas Martin Luther King Commission’s choice of former Governor Mike Huckabee to speak at an invitation-only prayer breakfast that is part of the Jan. 17 observance of MLK Day by the state commission.

Comments began on social media yesterday and they were soon followed by a note to me from Little Rock activist Dr. Anika Whitfield. Then came a letter from the Arkansas Democratic Black Caucus, which said:

Arkansas is very fortunate to have a Martin Luther King, Jr. Commission. At its best, this taxpayer-supported state agency is empowered to educate all Arkansans by amplifying the life and legacy of a great American minister and activist who helped advance the progress of racial equity in our country.

In this spirit, we write to express our deep disappointment and true outrage with the MLK Commission’s decision to select former Governor Mike Huckabee as guest speaker for the annual MLK Interfaith Prayer Breakfast on the King holiday, January 17, 2022 at the Governor’s Mansion.

Mr. Huckabee has demonstrated, on numerous occasions, that he is not the appropriate speaker to advocate for unity.

During his 2016 presidential campaign, Mr. Huckabee attacked Black Lives Matter, erroneously stating that the movement “elevates some lives over others” and claiming that Dr. King would be “appalled by the movement.” His out-of-touch comment was quickly denounced by Martin Luther King III who insisted that his father would embrace the movement and would “be very proud of young people standing up to promote truth, justice and equality.”
Even more alarming is Huckabee’s claim that the January 6 insurrection at our nation’s Capitol was more of “a rally that turned into a riot because of a few bad actors,” minimizing the mob violence that threatened our democracy.

And let’s not forget that Mr. Huckabee has publicly shared suggestions for suppressing voting rights using fraud and trickery.

Dr. King spent 10 of his final 13 years inspiring the nation to act on civil rights through non-violence, including the passage of the Voting Rights Act of 1965. In fact, the King family has requested that observances of this year’s King Holiday be devoted to supporting the passage of the Voting Rights Act. Considering this request by Dr. King’s heirs, the selection of Mr. Huckabee becomes even more difficult to understand.

Finally, the simple fact that the invited speaker is the father of an announced candidate for governor begs the question, “why would the Commission politicize a spiritual event this year and at this time when our nation is so divided over politics?”

As leaders in this community, we will not sit politely by and allow this event to occur without denouncing this choice. We must devoid this event of any positive value and stand up in dignity rather than sit silently in frustration. We will not attend this year’s Prayer Breakfast. Instead, we will join allies from across Arkansas in honoring Dr. King’s legacy through service to our communities. We call on all Arkansans who support our stand to skip the “invitation only” event and to let the MLK Commission know they should do better. Call them at 501-683-1300 or email them at Dushun.Scarbrough@ade.arkansas.gov.

We must do what is right in the memory of Dr. King and if he was alive today, we have no doubt he would agree.

What an insult to Rev. Dr. Martin Luther King, Jr. to invite Mike Huckabee, a person who walked away from pastoring to pursue a political and television career. Mike Huckabee has unapologetically used his political and televised roles to support the denial of human rights and the systemic oppression of people through imposing poverty, and creating discriminatory laws and policies based on race, religion, and identity. His separatist theology and philosophy expressed through his support of voter suppression laws and his candid, culturally offensive and judgmental statements are staunchly opposing to the loving theology and philosophy that Dr. Martin Luther King, Jr. embodied in his living and his legacy.

There are several persons who continue carry the torch of Dr. King’s bright legacy of love through their action who should have been considered and invited to serve as the keynote speaker in a location that includes, rather than excludes, persons who want to be inspired by and honor his legacy and movement. There are many national activists and organizers like Rev. Dr. Martin Luther King, Jr.’s granddaughter, Yolanda Renee King, his daughter, Rev. Bernice King, Rev. Dr. William Barber, II, Rev. Dr. Liz Theoharis, Rev./US Sen. Warnock, Dr. Marian Wright Eldeman, Atty Bryan Stevenson, US Rep. Cori Bush, and many others whose lives and works honor and respect his legacy.

Whitfield said that it added “insult to injury” for the state commission to choose a private high school as the place to hold a “Day of Impact” on the federal holiday.

(The prayer breakfast apparently will be held at the Governor’s Mansion, though the King Commission website doesn’t specific the venue. It will not be at Catholic High School. Catholic’s principal, Steve Straessle, said he wasn’t invited. He said the school will be a gathering site for the day of service which includes drive-through food distribution, a vaccine clinic, and job fair. He’ll be working with students volunteering for service that day.) 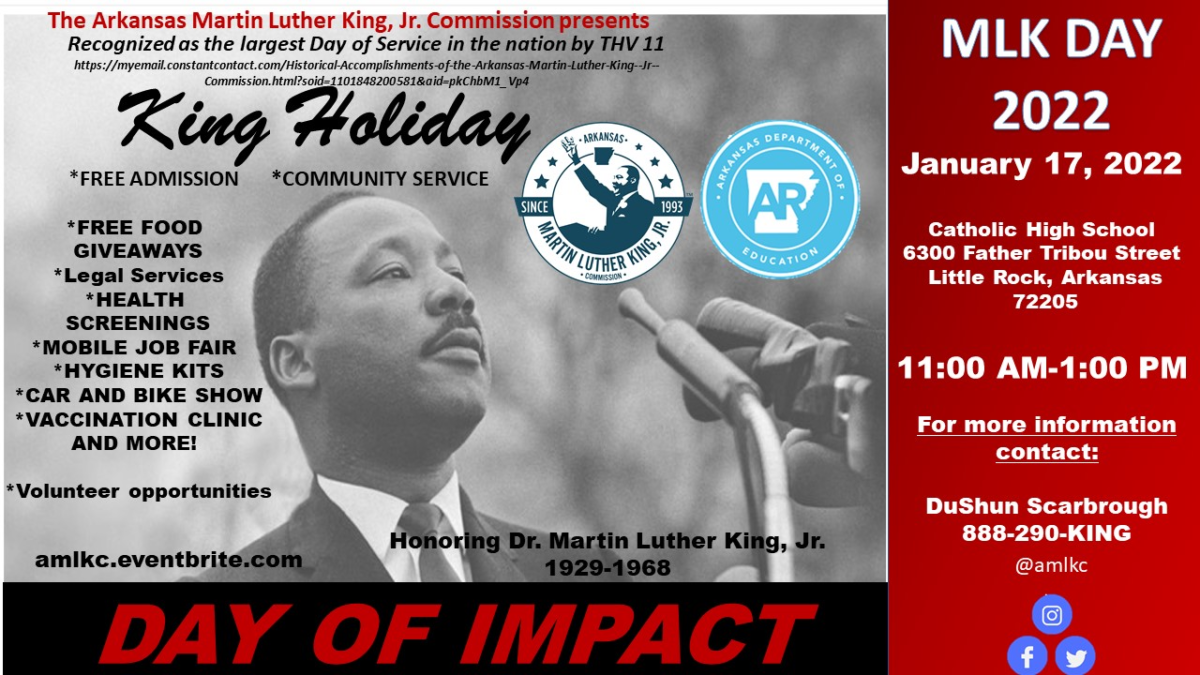 I wrote Scarbrough twice yesterday about the Huckabee event, the second time with an FOI request. He has yet to respond, which the law requires him to do for the FOI requests.

I’m interested in how Huckabee was chosen as a speaker. Did Education Secretary Johnny Key play a role? Scarbrough’s agency is under Key’s leadership. Key is the man responsible for buying $500,000 worth of flawed COVID comic pamphlets in a no-bid deal with a Huckabee publishing outfit when he could have gotten the same material for free from many sources. Is Key playing nice to hang onto his job for the expected rise of Huckabee’s daughter, Sarah Sanders, to the governor’s office? Or is Scarbrough merely solidifying his own $96,000-a-year job by giving the Huckster a starring role.

I hoped Scarbrough would discuss the choice of such a political figure in an election year in which he is so deeply connected. And I would ask him if he’s read some of Huckabee’s recent racist/transphobic comments, such as when he slammed corporations that had criticized vote-suppression legislation in Georgia.

Huckabee tweeted: “I’ve decided to ‘identify’ as Chinese. Coke will like me, Delta will agree with my ‘values’ and I’ll probably get shoes from Nike & tickets to @MLB games. Ain’t America great?”

I also asked Scarbrough whether Huckabee was being paid for the appearance and, under the FOI, for the list of those who will receive a “special” invitation to the event. I was interested, too, in the choice of Catholic High as a venue for the day’s other events.

Huckabee is a man who, along with many other Republicans, stiffed an invitation to attend the 50th anniversary of the march on Washington at which King gave his immortal “dream” speech. Huckabee is a man who called the John Lews Voting Rights Advancement Act, the King family’s focus of the day, “dangerous.”

I’m guessing MLK would have seen matters differently, even if Dushun Scarbrough does not.

PS: Jonelle Fulmer, Asa’s homey picked to chair the Arkansas Republican Party, is a member of the ML King Commission. I bet she could line up Mansion for the Huckafest,.