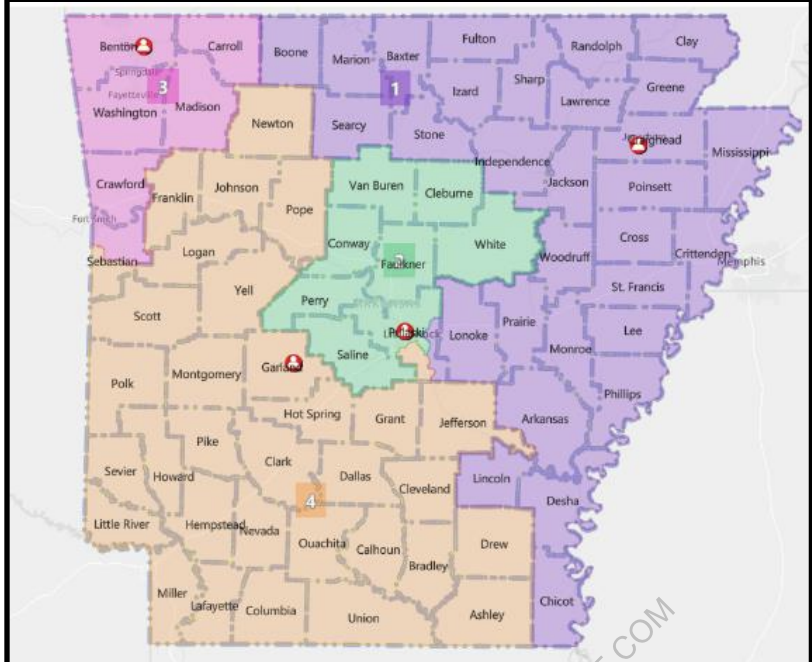 Another lawsuit, this one in state rather than federal court, has been filed challenging the Arkansas congressional redistricting plan as unconstitutional because of the racially influenced split of Pulaski County into three separate congressional districts.

The filing was announced on Twitter last night by Marc Elias, a Democratic Party elections lawyer who’s been leading the Democracy Docket and its challenges to Republican gerrymander and vote suppression tactics around the country.

The lawsuit does not yet appear on the Pulaski County circuit court website, though Elias distributed a copy with his tweet, so it’s not yet clear which judge will draw the case. UPDATE: The case is now on file and assigned to Judge Herb Wright.

The lawsuit, which you can read here, is similar in many ways to the federal lawsuit filed on March 7. That lawsuit alleged constitutional violations as well as a violation of the federal Voting Rights Act for the Republican legislature’s plan that moved 13 majority Black precincts in Pulaski County out of the 2nd District to the 1st and 4th congressional districts while replacing that lost population with virtually all-white Cleburne County. The aim was to dilute the Black vote in Pulaski County, which has trended overwhelmingly against Republican congressional candidates, most recently Republican Rep. French Hill.

As the federal suit did, the state court suit delves into a long history of diluting the Black vote in Arkansas, particularly by refusing to join Pulaski and Jefferson Counties, which are contiguous, into a single congressional district. The 2021 plan, the suit says, “even more systematically slices and dices Black communities in Arkansas, in particular in Pulaski County.”

Arkansas is the only state with a greater than 10 percent Black population that has never elected a Black person to Congress, the suit says. It notes, as the federal suit did, that Republican Gov. Asa Hutchinson declined to sign the redistricting law because of its obvious racial intent. In remarks to reporters, he said the legislature shouldn’t have diluted the minority voting power in Pulaski.

The suit seeks an order that the 2021 map is unconstitutional for violating the state Constitution’s equal rights and free election clauses. It also asks that the map be enjoined and for the court to order the adoption of a “valid” map.

The suit highlights the ” cracking” of Pulaski. 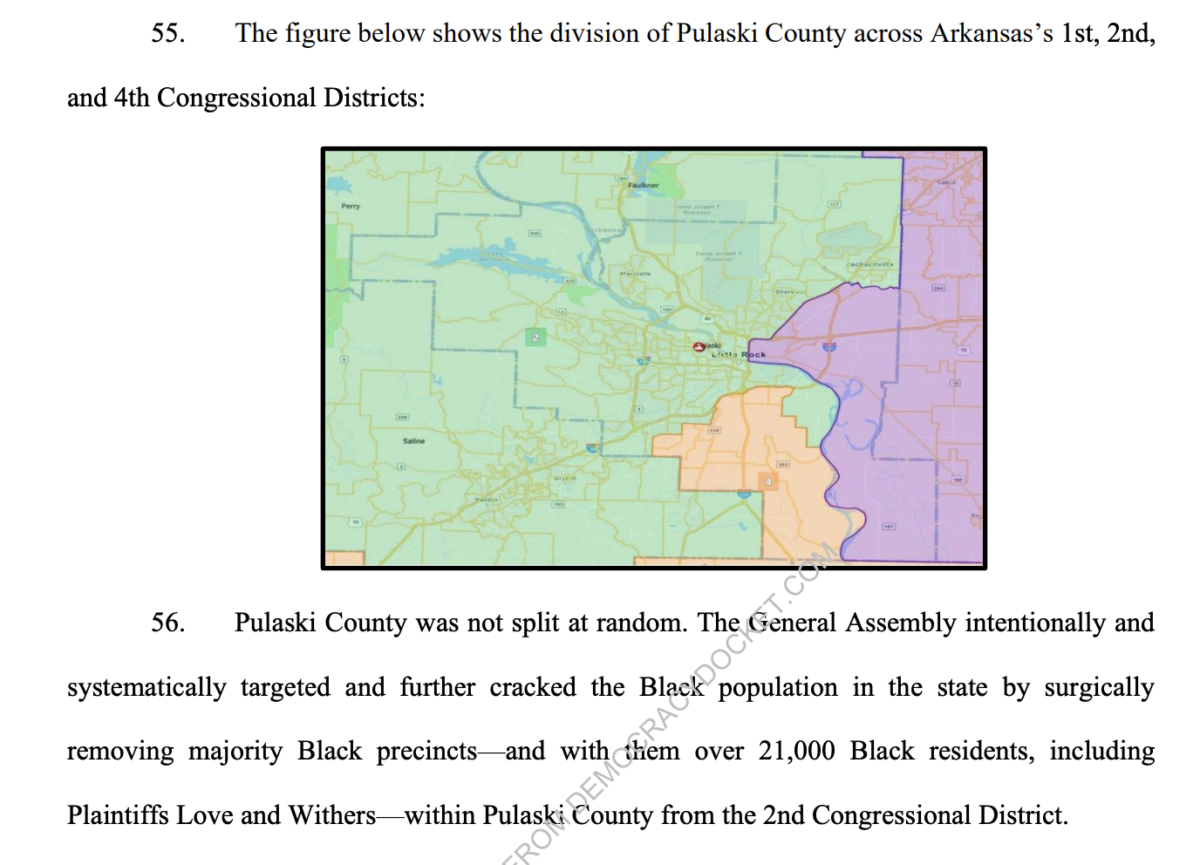 The suit goes on to note that the replacement population for 21,000 removed Black voters comes from Cleburne County, which has a total Black population of 92.

Is state or federal court a better place for this challenge? In either case, the deciding appeals panels — the Arkansas Supreme Court or the 8th U.S. Circuit Court of Appeals — are heavily tilted in the Republican direction these days.

In state court, the plaintiffs won’t face the unprecedented roadblock Trump appointee and Federalist Society Judge Lee Rudofsky threw up to a lawsuit brought under the Voting Rights Act. He reversed better than a half-century of U.S. Supreme Court precedent by saying only the attorney general, not private citizens, could bring lawsuits under the federal law. That law won’t be an issue in the state suit, only the state constitutional guarantees, which haven’t provided much protection from the Arkansas Supreme Court of late.