The Arkansas Museum of Fine Arts, formerly known as the Arkansas Arts Center, has been closed since late 2019 while it undergoes a massive $142 million renovation, now scheduled to be completed in the fall.

So perhaps your memory of the grounds has grown fuzzy. But eagle-eyed patrons have noticed that a prominent piece of sculpture that long stood near the entrance to the museum school is no longer on the grounds. And even with the construction fencing, it would be hard to miss: Tal Streeter’s “Standing Red” sculpture is 27 feet tall and 54 feet wide, according to Scott Carter’s LR Culture Vulture blog. As the name suggests, it’s bright red.

Streeter, who died in 2014, has an even larger piece prominently on display at Storm King Art Center in New York’s Hudson Valley.

I got a tip in February that the AMFA had possibly trashed Streeter’s work. I assigned a reporter to look into its whereabouts, but she couldn’t get anything out of AMFA brass. More recently, Little Rock architect and AMFA patron Jim Pfeiffer got on the trail and wrote about it on his History of the Heights Facebook Community, in which he includes a picture of some metal beams in a dumpster that could be “Standing Red.”

Pfeifer, with City Director Capi Peck copied, emailed Dr. Victoria Ramirez in an attempt to determine the status of the sculpture. She responded:

I am afraid I do not have much more to share regarding your inquiry.  The permanent collection at the Arkansas Museum of Fine Arts is owned by the AMFA Foundation.  The Foundation is a private entity that is separate from the Museum and I cannot comment about the status of the Foundation’s collection.

On behalf of the Museum, we are so grateful for your support and hope it continues in the future.

Peck said in response that she was baffled by the lack of transparency over such a simple question.

Ramirez has not responded to my query for information about “Standing Red.” My attempts to reach Bobby Tucker, have thus far been unsuccessful. According to both his bio at Stephens, where he’s a managing director, and the AMFA Foundation’s latest available Form-990, Tucker is the president of the foundation board. (UPDATE: The museum website now identifies Tucker as the former chair and Warren Stephens as the chair.)

In February, the museum touted “Standing Red” on its website’s “Art and Inspiration in MacArthur Park,” alongside Henry Moore’s “Large Standing Figure: Knife Edge.” But it’s no longer there.

Museums deaccession — sell, get rid of — parts of their collection all the time. They also take away items to be restored. I have trouble imagining that there would be widespread outcry if AMFA said it was getting rid of “Standing Red.”

But for the director of the museum to say that she can’t comment about her collection is nuts. She doesn’t know what’s in it?

Ultimately, this is a story about the heavy hand of the AMFA Foundation, long controlled by billionaire Warren Stephens, who with his wife, Harriet, made a $35 million donation to jumpstart the capital campaign to pay for the renovation. But unlike Crystal Bridges, the AMFA has long been supported heavily by taxpayers. The city of Little Rock owns the MacArthur Park land on which the museum sits and at least part of the building. City-issued bonds generated $32.6 million for the renovation project, and the city has long sent money to the museum and in increasing amounts in recent years. In 2020, it was set to contribute $800,000, but because of the pandemic, amended that amount to $666,667. In 2021, it transferred $800,000, and the AMFA is to receive $1.2 million of city dollars this year.

For other examples, see the Terry House debacle, of which the foundation has cavalierly denied responsibility. The announcement of the new Arkansas Museum of Fine Arts name also reportedly caught members of the museum’s board of trustees — a separate entity from the foundation — off guard.

The AMFA renovation promises to be stunning. It’s poised to be a wonderful thing for the capital city. But the museum’s blunders of late are putting a pall on what should be nothing but high anticipation. If Stephens and the foundation want to operate in the shadows, they can pay back the city bond money and break up the public-private partnership, as Stephens suggested might be in the museum’s best interest in 2010.

Until then, transparency is desperately needed. More on this story to come.

UPDATE FROM MAX: Jim Pfeifer reports more. Of course the D-G was favored with a scrap of publication news because the billionaire publisher Walter Hussman is an old pal of Bobby Tucker and his wife Ben has served on the museum board and is currently vice chair of the secretive Foundation board. Insiders all. The public? Does the newspaper’s famous creed include demanding accountability from rich people? Or will it blandly accept this bullshit? The director of the museum can’t say what is in her collection? 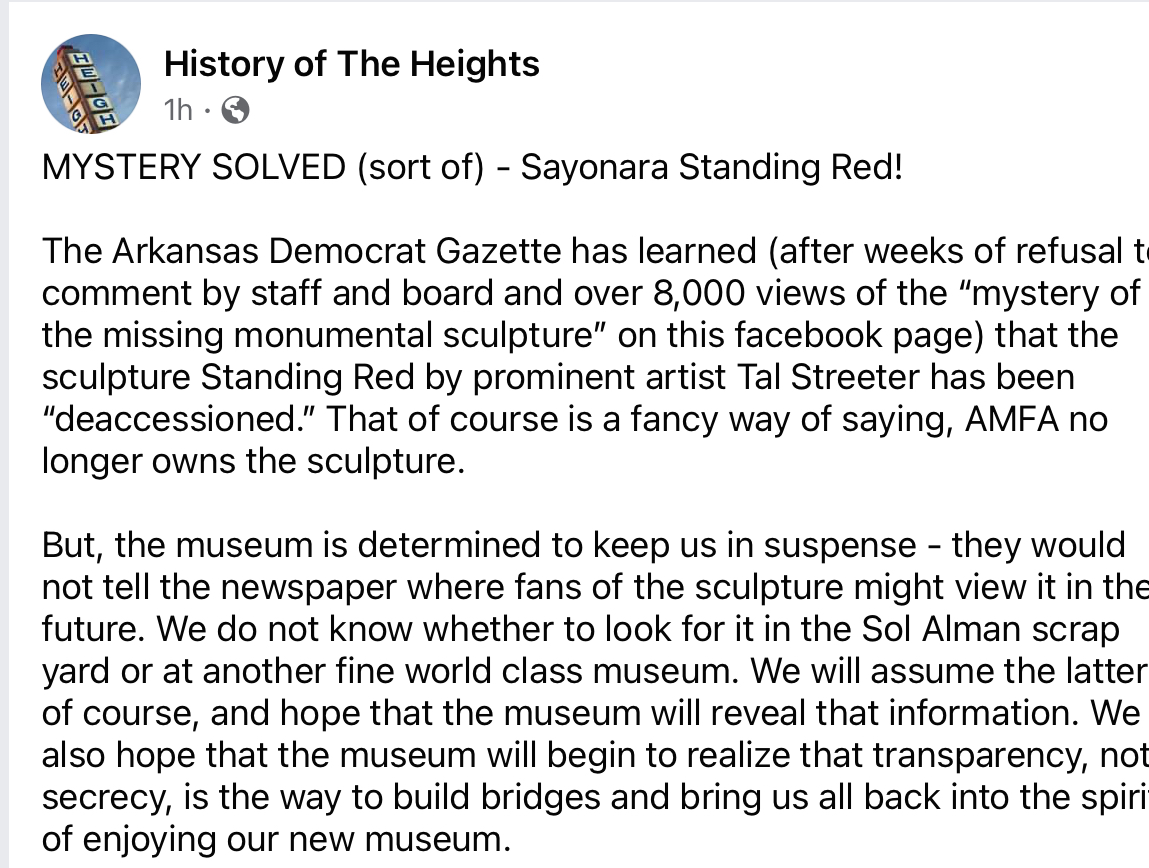