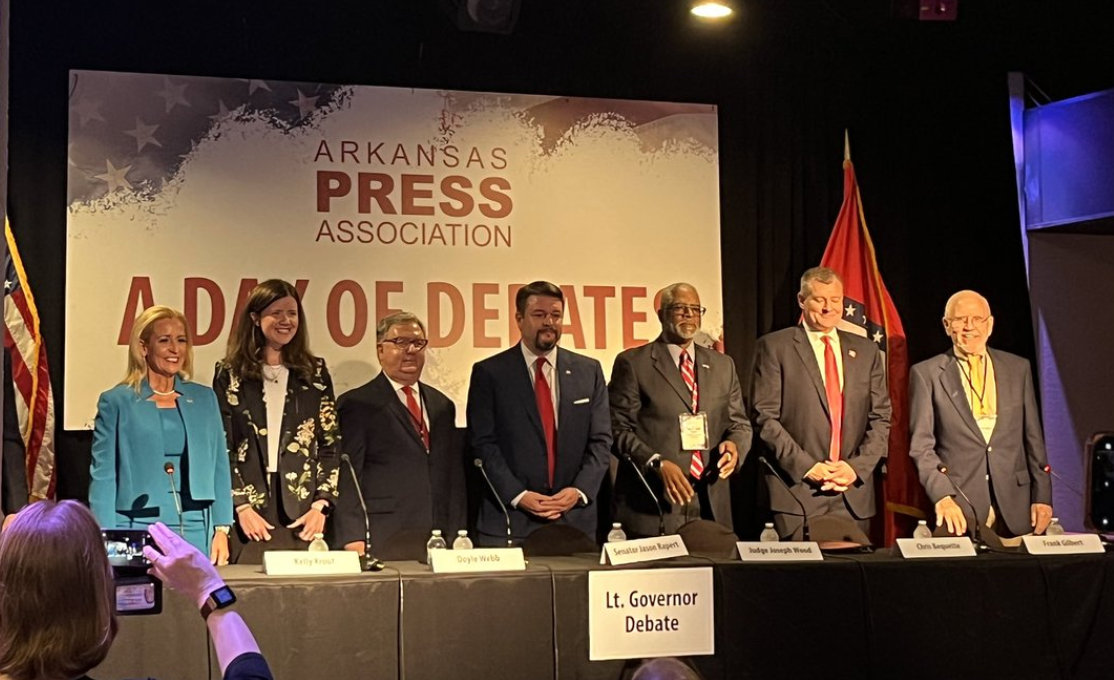 The Arkansas Press Association is holding a series of debates by candidates for statewide office, beginning with candidates for lieutenant governor — a six-pack of Republicans, Democratic nominee Kelly Krout and Libertarian Frank Gilbert.

A tweet by Krout suggests this debate is almost as meaningless as the office itself.

Other candidates on stage were talking a whole lot about eliminating income tax, but haven’t said how they plan to pay for roads & schools if we cut the budget in half.

Meanwhile, AR has the 3rd highest sales tax in the US. Income tax cuts really only benefit the wealthy.#arpx

Surely Leslie Rutledge and them have worked in Joe Biden’s name a time or two as well.
The lieutenant governor’s only duty is to preside over the Senate when it is in session and the person in the office need not do that. The person in the office no longer becomes governor when the governor is out of state, though he or she could rise to the office if the governor dies or is disabled. The office has no power and little influence because it has nothing to offer the legislators who DO have a say in income tax rates. Former Republican chair Doyle Webb promises to work full-time doing nothing.

A recording is being made of the debate. It will be posted later and I’ll add a link when I have it. I’m hopeful the Republican zanies will get into it at some point.

Coming are debates by candidates for secretary of state, attorney general and governor. The Republican front-runners for AG and governor, Tim Griffin and Sarah Huckabee Sanders, had better things to do than show their faces against other candidates.

UPDATE: Jesse Gibson, Democratic candidate for attorney general, blasted Tim Griffin, one of two Republican candidates, for not showing up.

Current Arkansas Lt. Governor and Attorney General candidate Tim Griffin earned the moniker “missing Griffin” at Thursday’s Arkansas Press Association debate. While the career-long politician claimed to have a “prior engagement,” many feel as though he intentionally skipped the event to avoid being held accountable for his actions as an elected official.

Tim Griffin is a scandal-ridden creature of Washington: He went to DC right out of law school in the 90s and worked there until he became Lieutenant Governor. While in DC, Griffin ran an illegal voter-suppression scheme to prevent soldiers from voting, pushed out U.S. Attorney Bud Cummins to steal his job and avoided accountability by skipping Senate confirmation, then had to resign in disgrace. In between DC stints he worked for a lobbying firm whose favorite client was the Cayman Islands Government, a well-known tax haven at the time.

… who is anti-veteran: Tim Griffin tried to block the VA from moving a “decrepit” clinic for homeless and other veterans to a new facility in Little Rock, because he was more concerned about business owners in the neighborhood than providing services for veterans.

“Tim Griffin is always missing when it counts,” Gibson said. “He was missing when asked why he prevented soldiers from voting in the 2004 presidential election, he was missing when he should have been vetted by the Senate after stealing Bud Cummins’ job as U.S. Attorney in 2007, and he was missing when Arkansas veterans needed him in 2012. The people of Arkansas deserve an Attorney General who is there for them, not a creature of Washington always looking for the next empty seat to fill.”