The proof for an advertisement of a Juneteenth event that somehow got leaked out Tuesday is catching flack for its all-white lineup.

“I got a rope around my neck and I’m tarred and feathered over an event that’s already dead,” Harris said, between hearty guffaws. Harris has been a realtor, a Republican candidate for lieutenant governor and a recovered addict who went on to establish rehabilitation facilities.

This leaked image was just a proof, not a final version, Harris said. And unity was supposed to be the theme of the event. “It just got perceived in the wrong way, and my sponsors said to leave it alone. It’s dead. It’s dried up.”

Juneteenth, of course, is a June 19 holiday marking the first day of freedom for enslaved people in Texas, the last state of the Confederacy where Black people were still trapped in institutional slavery. President Biden made it a federal holiday in 2021.

The Arkansas Juneteenth Unity Foundation distanced itself from the leaked poster proof Tuesday, taking to Facebook to clarify that they weren’t the hosts.

The Urban League, listed on the proof as one of the benefitting organizations, wasn’t far behind. 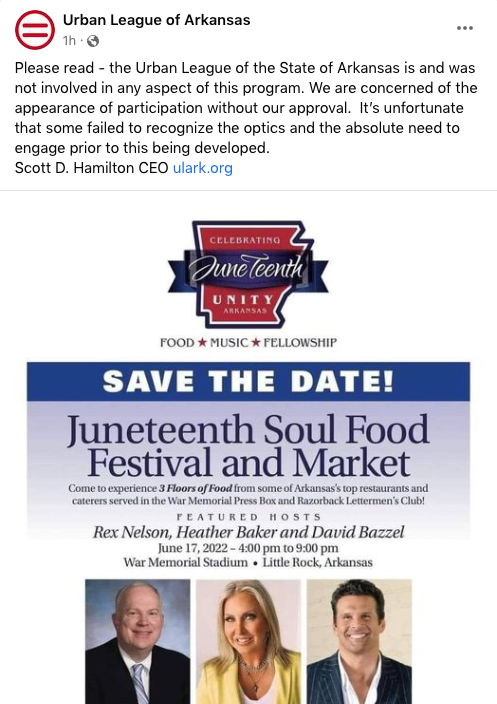 The Urban League distanced itself from the event.

While he’s sitting this Juneteenth out, Harris said he might try again next year.