BREAKING NEWS: For weeks, state election officials knew my name was wrong on thousands of ballots. Now that voting has started, they’re refusing to correct it because a company in Omaha controls Arkansas voting machines.

Jake Bequette, a Republican candidate for U.S. Senate, says his first name is listed incorrectly as Jack on some ballots in Arkansas and he is not happy state officials won’t fix it.

The problem seems limited to Craighhead and Phillips County.

“The voter fraud that occurred in the 2020 election was absolutely egregious, and now we’re seeing the establishment political machine try and steal another election here in Arkansas. For weeks, statewide election officials have known that my name was going to be listed incorrectly on ballots here in Arkansas, but they refused to act, correct the ballots, notify the voting public, or even notify my campaign. That’s what an intentional, political cover-up of voter fraud looks like. It’s disgusting, and it should be fixed immediately. I’m calling for Secretary of State John Thurston and Attorney General Leslie Rutledge to fully investigate this fraud and find a solution that will ensure voters across Arkansas are able to confidently participate in this election process and vote for a true conservative warrior.”

While Bequette should be listed on the ballot as “Jake Bequette,” in Craighead County – and potentially other counties across the state – Bequette is fraudulently listed as “Jack Bequette,” potentially confusing voters and discouraging them from voting for conservative warrior Jake Bequette.

To listen to Jennifer Clack, Election Coordinator for Craighead County, admit to the existence of this fraud, the Arkansas establishment’s intentional cover-up, and their blatant disregard for the disenfranchisement of Arkansas voters, click here.

I’ve sought a comment from Secretary of State John Thurston and I’ve also asked the Bequette campaign if they have determined how many counties’ ballots might contain this error. The sample ballot for Pulaski appears to be correct, for example. 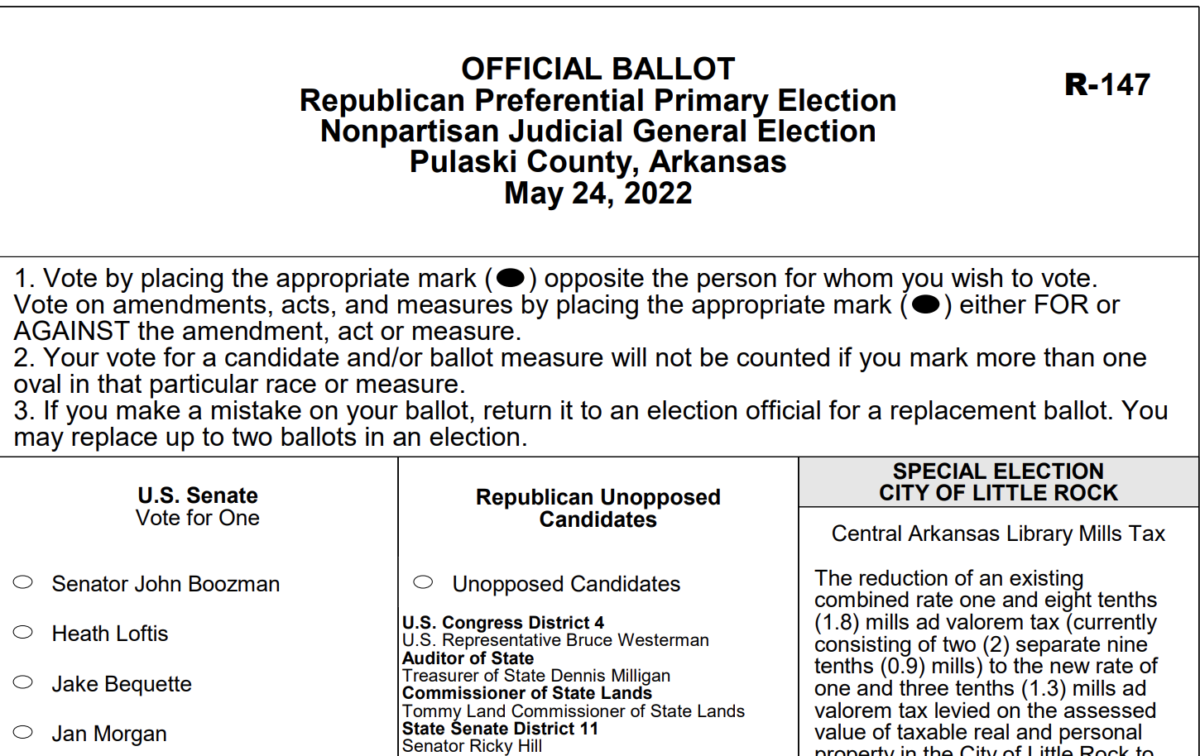 UPDATE: A statement from Secretary of State Thurston:

I am disappointed that Craighead County failed to correct the error we identified and notified them of concerning the misspelling of Mr. Jake Bequette’s name.  I can relate to Mr. Bequette’s frustration as a similar failure occurred to me in another county in the 2018 General Election. After candidate filing, my office sent a certified list of candidates to each county and Mr. Jake Bequette’s name was correct on that certification. An error was made by the county during the preparation of the ballots. We discovered the misspelling of Mr. Bequette’s first name on April 28th and immediately contacted Craighead County to alert them of their mistake. We strongly advised them to correct the ballot as there was still ample time. We also alerted the county that Arkansas code requires a county to hold a public meeting to explain the error, give a solution to the error, or explain why the error can’t be fixed. The county failed to comply in both cases.

I have instructed the Director of the State Board of Election Commissioners to reach out to Mr. Bequette to inform him of the formal complaint process.

UPDATE II: Bequette filed a legal action late this morning against Thurston, the state Board of Election Commissioners and the Craighead County Election Commission to correct any ballot errors and notify the public of the errors.