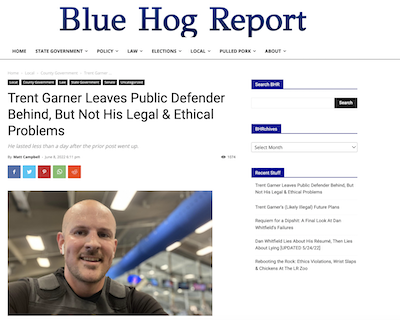 Blue Hog Report, the muckraking website run by Little Rock lawyer, Matt Campbell, has claimed another scalp. His recent reporting forced the termination of Sen. Trent Garner, the angry Republican from Camden, from a $60,000-a-year state-financed public defender. It was a job that it was illegal for a sitting legislator to take on top of his senatorial pay.

Garner’s troubles aren’t over. There’s a case to be made, Campbell explains, that Garner could be prosecuted for taking the job. It would require proof that he knowingly violated the law. There’s circumstantial evidence: He voted for the law that made it crystal clear that such a double-dip was illegal. He also voted for the laws that provided special funding for public defenders to clear a pandemic-caused backlog. (It should be a crime for a demagogue such as Garner to be paid as a defense lawyer, his public pronouncements evidence that he might not be a vigorous advocate for the accused.)

But that isn’t the end of the story. Campbell illustrates why the Ethics Commission should take a look. Also the Supreme Court Committee on Professional Conduct of lawyers. And there’s also the matter of his illegal exaction of state money. Between April 12 and June 3, when Garner tendered his resignation within hours of a Blue Hog Report, he was paid $9,192.30. State taxpayers should get that money back. Where are the consumer/public integrity divisions of the Arkansas attorney general on this corrupt behavior?

The Blue Hog Report account is must reading, with far more detail than the article in the Democrat-Gazette this morning on Garner’s resignation (it had not previously reported his hiring, as the Times’ Austin Bailey had). It includes attention to the misreading of the anti-double-dip law by Greg Parrish, executive director of the Public Defender Commission, who initially cleared the hiring of the senator.

Blue Hog’s timeline of this story is useful:

Right about here is where we could all likely benefit from a timeline. After the initial post went up last week, Ms. Blue Hog and I pored over Sen. Garner’s social media accounts, the Arkansas Secretary of State website, and other public records, putting together a sort of “What We Know” dossier. I also sent FOIA requests to a number of agencies, including the prosecutor in Union County, the Arkansas Public Defender Commission, and the public defender for Union County.

March 3, 2022 — Sen. Tucker presents all four bills to the Joint Budget Committee, which returns the bills to the Senate with a Do Pass recommendation

April 5, 2022 — Garner texts Daren Nelson, managing public defender for the 13th Judicial District, to confirm a meeting between them the following day at 2pm.

April 11, 2022 — The 13th Judicial District public defender’s office contacts Garner to tell him that, because he’s also a Senator, he will need to fill out an additional dual-employment form and won’t be able to start his new job until April 12.

April 12, 2022 — Garner’s first day as a public defender. According to his on-boarding documents, he was to work Monday through Friday, for six hours per day.

June 1, 2022 — Someone at the public defender’s office texts Garner to tell him that “A female named Austin Bailey called–Claims she’s just trying to verify employment.” Garner responds, “Reporter with Arkansas Times, I would suggest to say we don’t discuss employment.”

June 2, 2022 — The first Blue Hog Report post about the illegality of Garner’s public defender job goes live. A link to that post was sent to Gregg Parrish, Executive Director of the Arkansas Public Defender Commission.

June 3, 2022 — Parrish speaks to Garner by email and phone, ultimately informing him that the Blue Hog Report post was correct and that Garner would have to terminate his employment as a public defender. Garner tenders his resignation the same day.

If this were some other legislator, perhaps this is where the story would end, with his having resigned immediately once this came to light and a certain blogger doing slightly too much of a victory lap. But this isn’t someone else, is it? This is Trent Garner, one of the most hateful, divisive, and intentionally disingenuous legislators to infect the capitol in a while. So a deeper dive is definitely warranted.

Give Campbell a victory lap:

The main takeaway at this point, however, is this: Trent Garner took a position with the public defender that he knew he was not allowed to take, and taking that position was a criminal act. When called out on the illegality of his actions, he turned tail and ran, apparently believing that resigning the position would take care of all of the other problems.

A footnote: The editorially conservative Arkansas Democrat-Gazette persisted today in its practice of labeling Blue Hog Report as “left-leading.” That’s not inaccurate. But it is irrelevant, particularly here. This was a case of solid investigative journalism, using legal research and the state Freedom of Information Act to produce nearly instant results. Ideology had nothing to do with it (except understandable schadenfreude).

There must be further accountability for Garner’s actions, if for no other reason than to burnish his resume if he indeed makes a rumored run for a judgeship someday. Trent Garner a judge? Is there anybody less suited for a role where judiciousness, even temperament and respect for the law are important?

Garner didn’t run for re-election. Perhaps his father-in-law, aiming to take the seat, will clean up the law for his daughter’s husband after the fact.