I’ve been wrangling unsuccessfully for weeks with the University of Arkansas to obtain details of its agreement to switch from Pepsi to Coca-Cola as the exclusive supplier of non-alcoholic beverages on the Fayetteville campus, including lucrative sports venues, effective July 1.

The latest development is a signal that the UA doesn’t ever intend to provide financial details of the deal.

Here’s a summary of my effort to illuminate the business activities of the state’s land grant university.

After I asked for the details of the Coca-Cola deal, the UA responded that final details were still being worked out. I asked for a copy of the draft agreement, understanding changes might be made. They pulled out a familiar reason to deny this request, principally this:

However, the record is being withheld as exempt from disclosure, based on the competitive advantage exemption to the FOIA, Ark. Code Ann.§ 25-19-105(b)(9)(A) (exempting from disclosure public records “which, if disclosed, would give an advantage to competitors or bidders.”

What competitors or bidders? The bidding is over. UA has chosen Coca-Cola. And there my request stands so far. The UA has a staff full of six-figure lawyers and administrators long accustomed to using public dollars to defeat public access to campus information. I work for a struggling publication in a dying industry that had to quit a previous fight with UA over its interpretation of the sunshine law because we couldn’t afford to appeal an adverse Circuit Court decision. In that case, UA said we couldn’t see the promises UA had made in return for a $300 million gift from the Walton family. Again, competition was cited, though that deal also was done and nobody else was offering $300 million. The University eventually DID provide the full terms of that agreement, by the way. At the time, several lawyers with deep experience in FOI law said they believed UA alum Judge Chris Piazza had misinterpreted the law in his alma mater’s favor. But no matter. That was then.

I asked this week for a copy of the soon-to-expire 10-year-old Pepsi contract.

I was provided this copy. But wait, said an accompanying note:

Limited information has been redacted, based on the competitive advantage exemption to the FOIA, Ark. Code Ann.§ 25-19-105(b)(9)(A) (exempting from disclosure public records “which, if disclosed, would give an advantage to competitors or bidders.

The first question from me, unanswered by UA: What bidders or competitors? This contract is over, done.

Here’s the biggest of numerous redactions: Secrecy of the annual sponsorship payments. 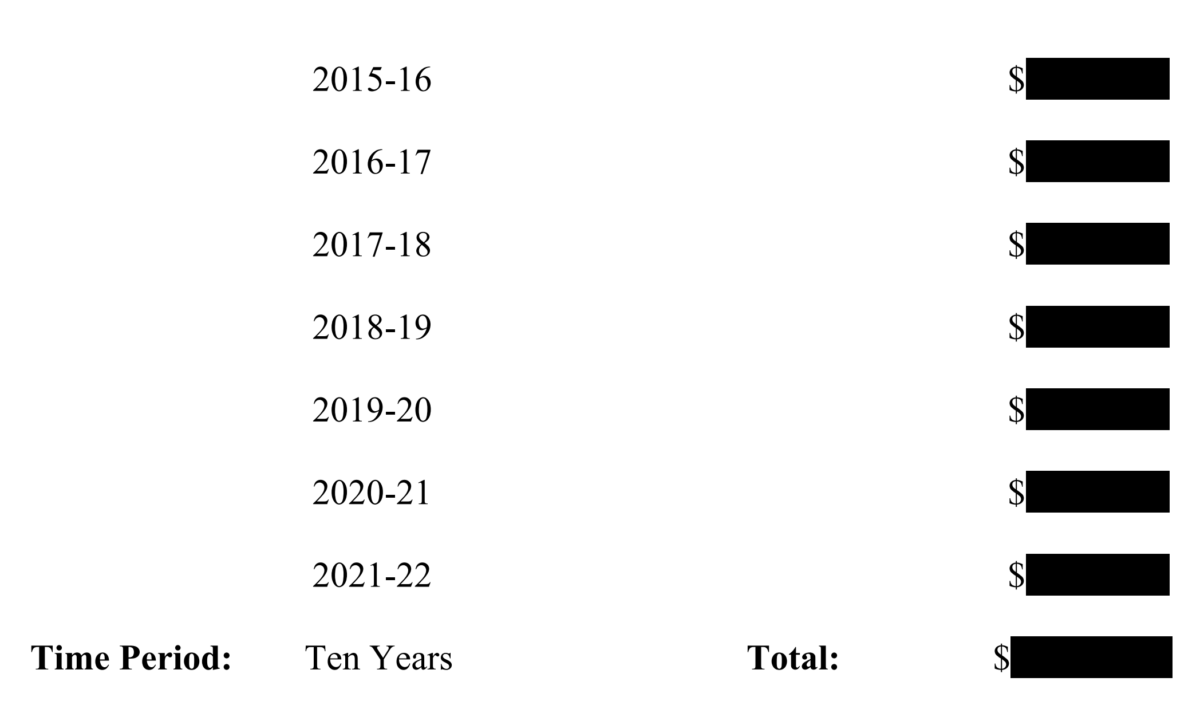 This is, to use a technical legal term, nuts. What is the possible competitive disadvantage to the UA or anyone in revealing payments already made under an expired contract? It is particularly nuts given that the University at the time the deal was struck in 2012, PUT A PRICE TAG on this 10-year deal of $19.8 million, with the majority, more than $11 million, going to athletics. Now it’s a secret?

The redactions also included the projected annual vending license fees; terms that would apply to the parties if the contract was terminated; a fund to provide card reader machines for purchases, and an annual payment for “sustainability initiatives.”

Other redactions included amounts promised as bonuses for increases in food service drink sales; a fund for student/campus “product support” and specifics on how that fund could be used and a fund for promotion at athletic events.

The agreement cedes to Pepsi the right to decide what information in a contract binding the University may be released under the FOI law. I don’t think that determination can be given away to a private company so readily. Illegal contracts are not enforceable, generally speaking.  But it would take a lawsuit to upend this.

In short: If you’re interested in the information about how much money a public institution has made using its valuable franchise to shake down tributes from a soft drink company, primarily to benefit athletics, the UA has put it where the sun doesn’t shine.

More of the “limited” redactions (and these don’t include pages of redactions of pricing of products sold on campus, including on vending machines, which presumably post such prices for buyers out in the open despite the supposed competitive disadvantage): 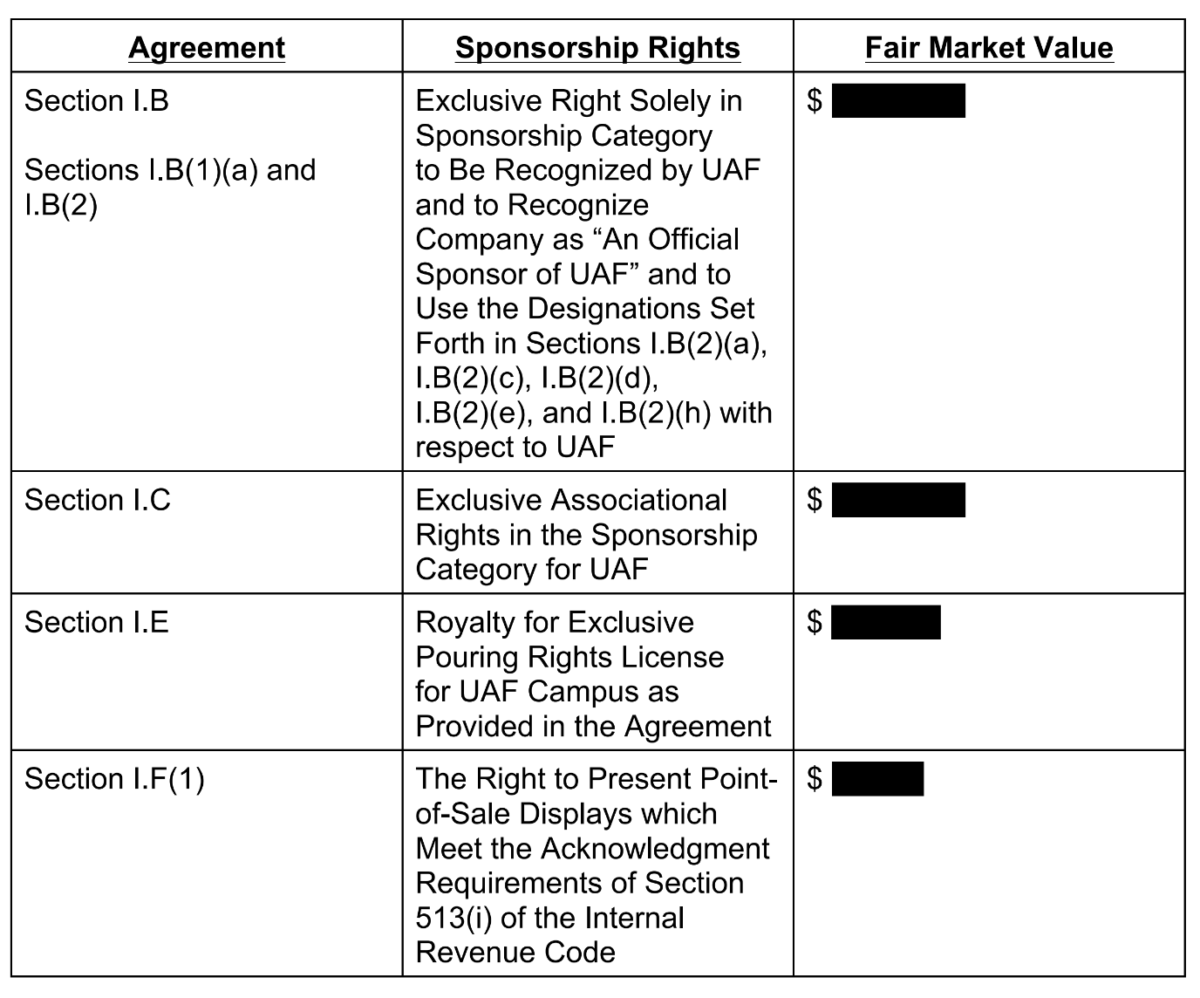 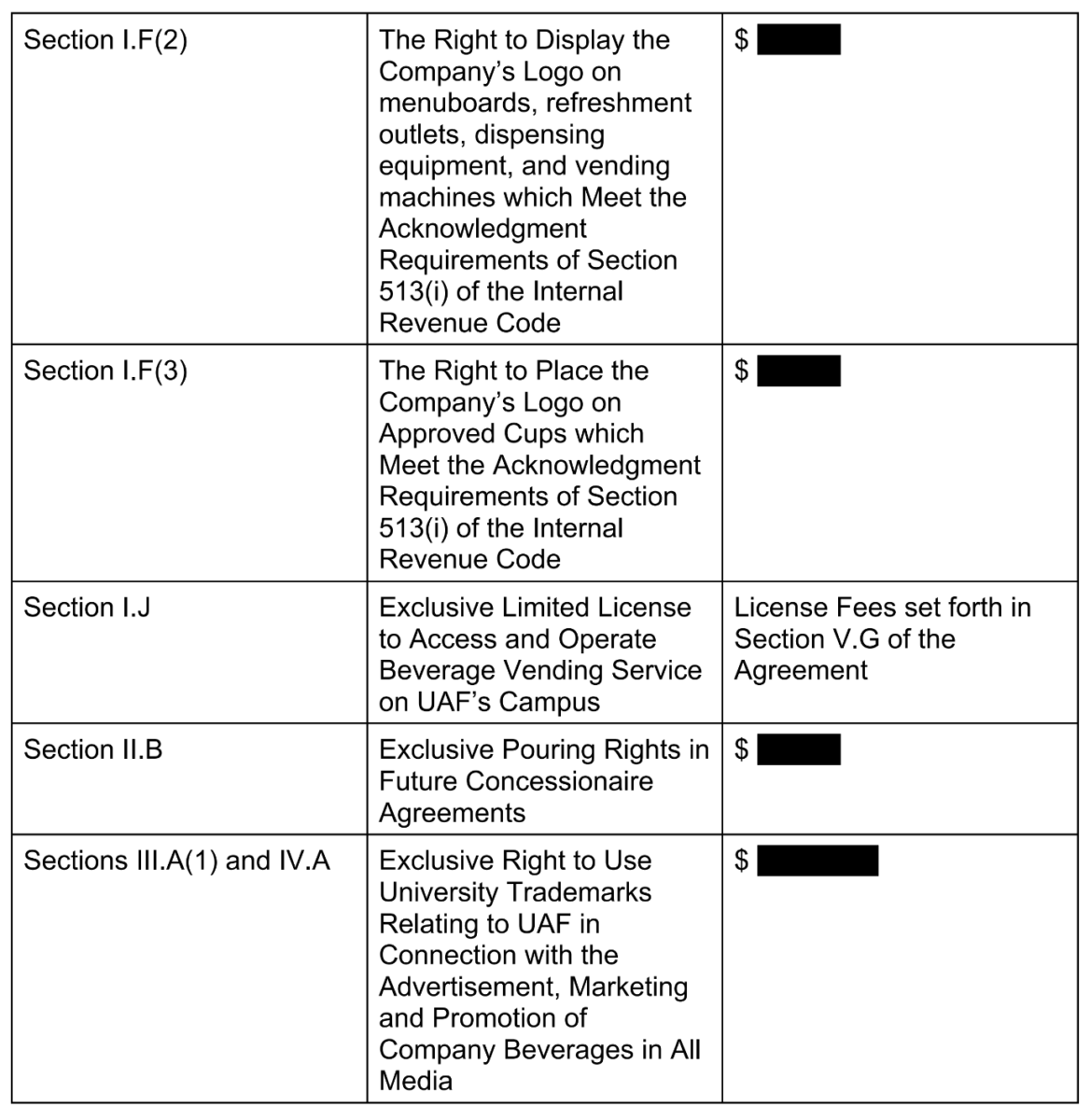 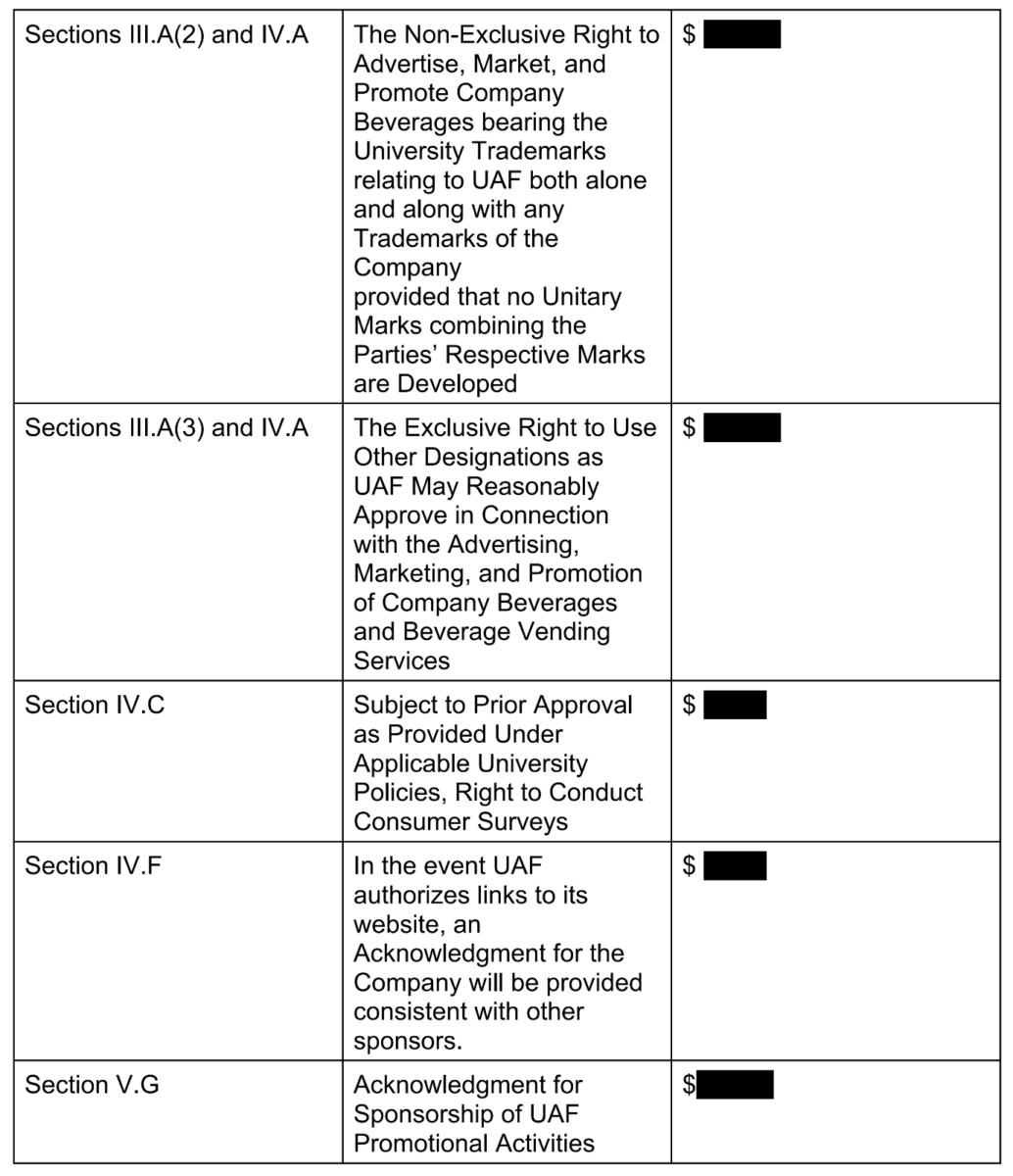 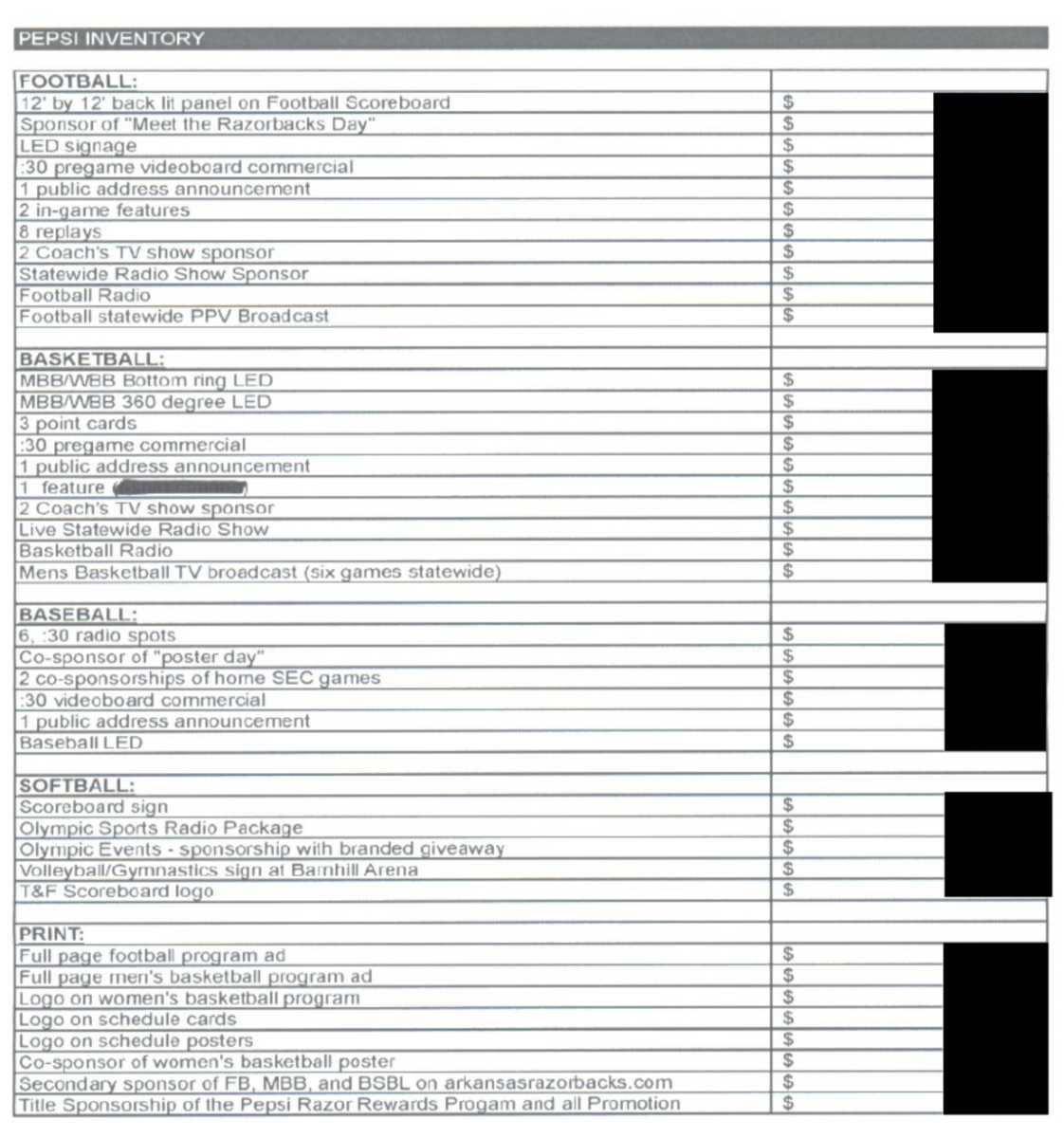 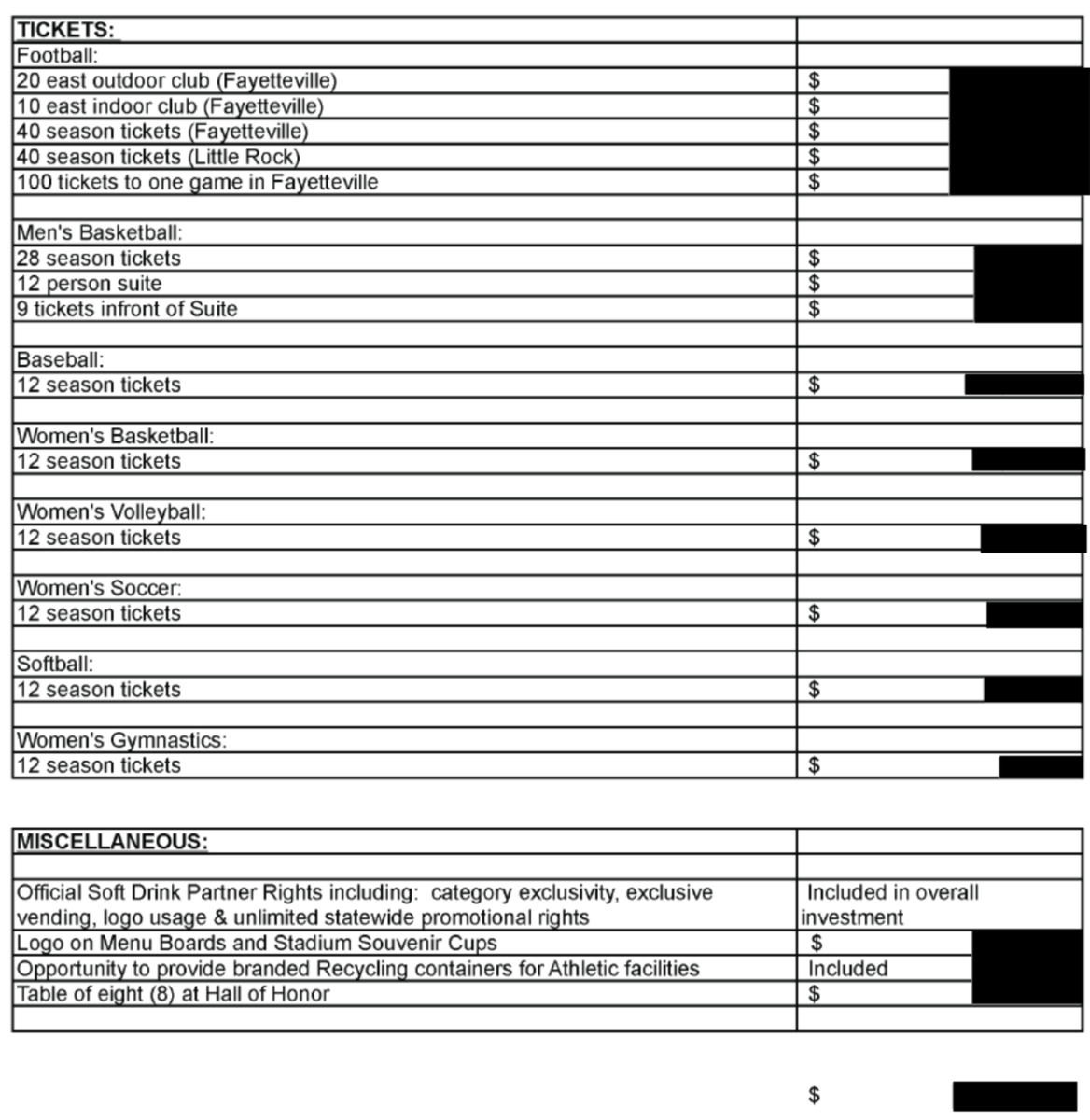 Footnote: Just this week, the Arkansas Supreme Court reiterated that the FOI law is to be construed broadly and it specifically referenced the competitive advantage exemption so beloved by UA to keep its business secret. It wrote:

This exemption is intended to protect “trade secrets and other proprietary information businesses submit to governmental entities to satisfy regulatory requirements or for other purposes.”

The amount paid to UA is a trade secret? Proprietary information? It is not hard to see how broadly this reading could be abused in the operation of a nominally public institution. If the public can’t evaluate the bids for soft drink suppliers, what bids for campus supplies can it be allowed to see?