Read this month's issue
Browse the issue archives
Loading…
Advertisement
Home Arkansas Blog UPDATE: Can Russ Racop get a judge? He did. ‘Russ is out!’

The Arkansas Democrat-Gazette reported this morning that sometimes incendiary blogger Russ Racop had started a six-month sentence Wednesday for misdemeanor harassment convictions in district court and had been unable to find a judge to free him from jail pending his appeal to Circuit Court.

One of his lawyers has questions. And UPDATE: It appears those questions led to an order allowing his release from jail this afternoon.

His lawyers filed notice of appeal. Two judges recused, Judge Karen Whatley and Cathi Compton. Compton, according to another Racop lawyer, Rob Steinbuch, was asked by Racop lawyer Chris Corbitt for an emergency hearing when he found her at an Arkansas Bar Association meeting in Hot Springs that most judges are attending. She reportedly deemed this an improper contact with the court, though ex parte requests for emergency hearings are not unheard of.

Her recusal bounced the case to Judge Wendell Griffen, whose staff has told Steinbuch he is not in court this week and that Racop will be arraigned in that court next week. Meanwhile, he remains in jail.

Steinbuch contends this is a violation of Racop’s rights. He is serving a sentence as if convicted on a charge that, by law, must be retried from scratch at the Circuit Court level — and before a jury, if Racop requests one. He conceivably couldn’t come to trial until the sentence is completed, Steinbuch noted.

Steinbuch argues the cases have constitutional defenses. He argues that name-calling, which Racop is accused of in the case of a Little Rock parks worker and a City Hall worker who Racop contended didn’t act on improper use of a handicapped parking place, is protected by the First Amendment. So are publication prerogatives, he said. These have been limited for Racop by District Judge Milas Hale, who convicted and sentenced Racop in three consolidated cases when Little Rock Judge Melanie Martin recused.

I hesitate, as ever, to dive deeply into the Racop morass. He can be unpleasant in his obsessive pursuit of his agenda. He also has a knack for digging up information, often with the use of the Freedom of information Act and cyber skills.

The general bottom line, which I mean generally and not specifically in this case: Even obnoxious, crazy people are entitled to the protections of due process and the First Amendment.  Think the neo-Nazis of Skokie.

Defendant was sentenced Monday to 180 days in jail as a consequence of three related cases all joined in this appeal under the above-captioned number. And the District Court stated that Defendant had to show up to jail irrespective of whether an appeal is filed. This is improper under the Rules of Arkansas Criminal Procedure. Nonetheless, as a consequence of the district judge’s incorrect claims, Defendant went to jail yesterday and is CURRENTLY incarcerated. The Arkansas Rules of Criminal Procedure, described below stay all proceedings – including judgments and sentences – pending the filing of an “appeal” in this Court. As this Court is aware, the appeal to this Court is not a traditional appeal limited to certain appealable issues, as is a case, for example, appealed from this Court to one of the appellate courts in Arkansas. Rather, the appeal to this Court is entirely de novo. As such, everything – including sentencing – is up for review. Moreover, once the appeal is filed, the jurisdiction rests solely with this Court.

UPDATE: I don’t have all the details yet, but a document filed around 2 p.m. today on the court website said Racop could be released on his own recognizance today if no other detention orders were pending. He was scheduled for an initial appearance in Circuit Court on his appeal June 23. 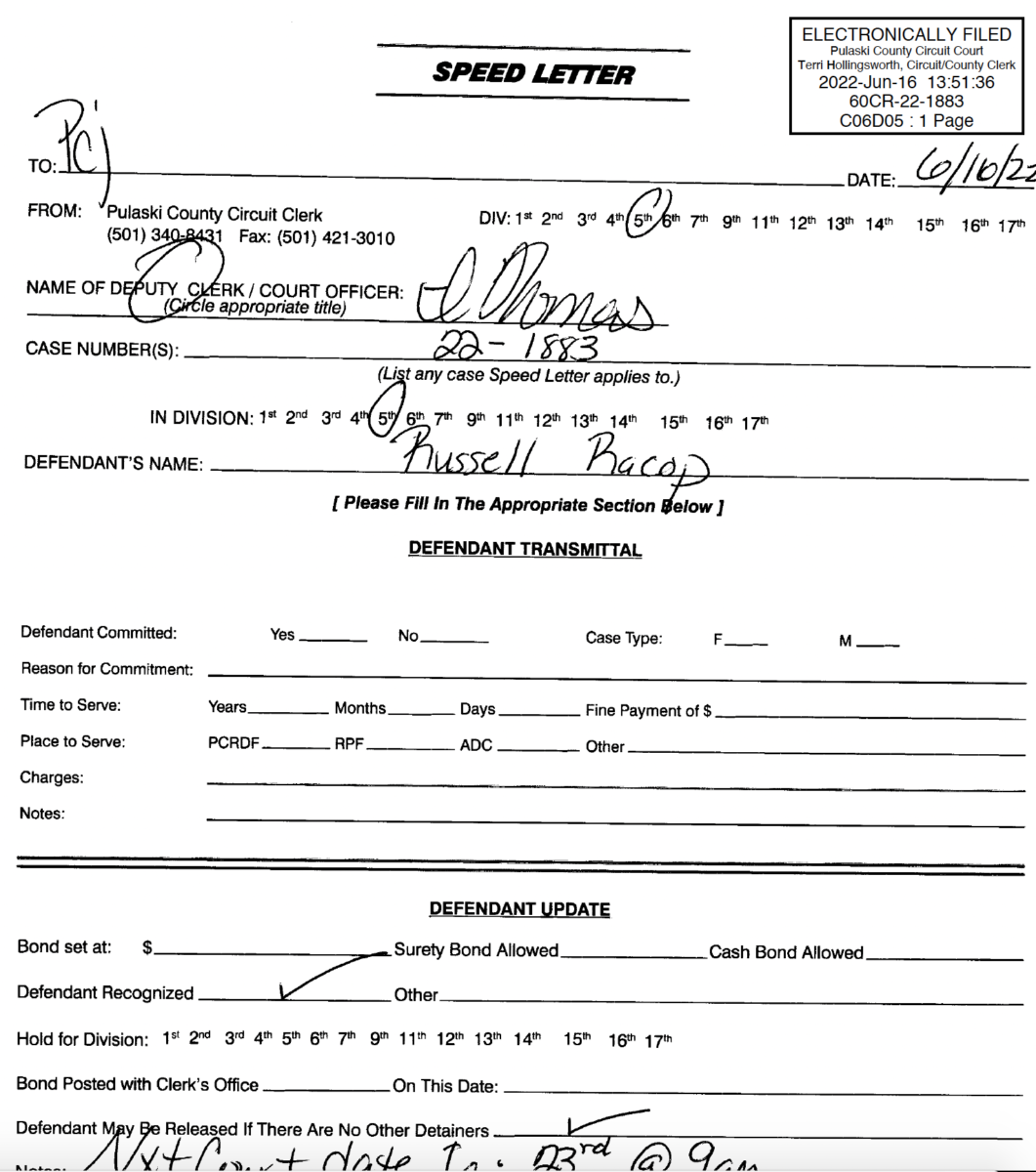 A text from Steinbuch: “Russ is out!”