Dollar General, the low-cost retailer that is expanding into fresh groceries, has announced three new distribution facilities around the country, including a “dual” distribution center in North Little Rock.

The dual centers serve both the “DG Fresh” supply chain and traditional goods.

The North Little Rock center, which is expected to be near the Amazon distribution center at Galloway, just off I-40 east of the city, will cost $140 million. Construction will start this fall with a 2023 completion date. The company’s news release said it expected to spend $480 million and employ 1,100 eventually, which would put about a third of the employment in Arkansas.

Dollar General will join Amazon and Lowe’s with distribution hubs at Galloway. Tractor Supply recently announced a major distribution center in Maumelle. In all cases, these plans were developed by the companies with private land purchases. It raises a question to me about whether Little Rock taxpayers should back $15 million in bonds, plus carrying charges, at the coming special election on the renewal of a property tax for capital improvements. It’s for unspecified expansion of the  Little Rock Port industrial park.

It seems to me that buyers can find and develop land without a government intermediary. That government intermediary also can option land to offer a prospect, but not be left holding the bag for an indeterminate period should the prospect not develop. That happened with the state’s purchase of the Verizon building in Little Rock at an inflated price for a Raytheon expansion that didn’t happen. The Little Rock Port also gave land away to entice a Czech gunmaker that couldn’t raise the money to build a planned factory. The port luckily eventually found someone to buy the property for a speculative development. The port is also giving land away for a building materials facility. The northside proves you can get thousands of jobs without giving taxpayer-purchased land away.

UPDATE: Robert Birch, director of development for North Little Rock, says the three projects built or announced each have 1 million or more square feet and Amazon already has 1,500 people at work. He said there’s a fourth tract in the former farm that now will be home to Amazon, Lowe’s and Dollar General and the city has a strong prospect to build three speculative buildings of 400,000 square feet each to meet a national shortage of warehouse and lab space.

In all he said, North Little Rock would be looking at some 3,000 jobs on the former farm, not counting the drivers who’ll come and go. He said the city has received almost $900,000 from the state Department of Transportation to improve U.S. Highway 70, which borders the south side of the property.

Here’s the city map of the division of the farm property, with Amazon in tract 1, Lowe’s in tract 2 and Dollar General in tract 4. The city thinks it has a prospect to build in tract 3. 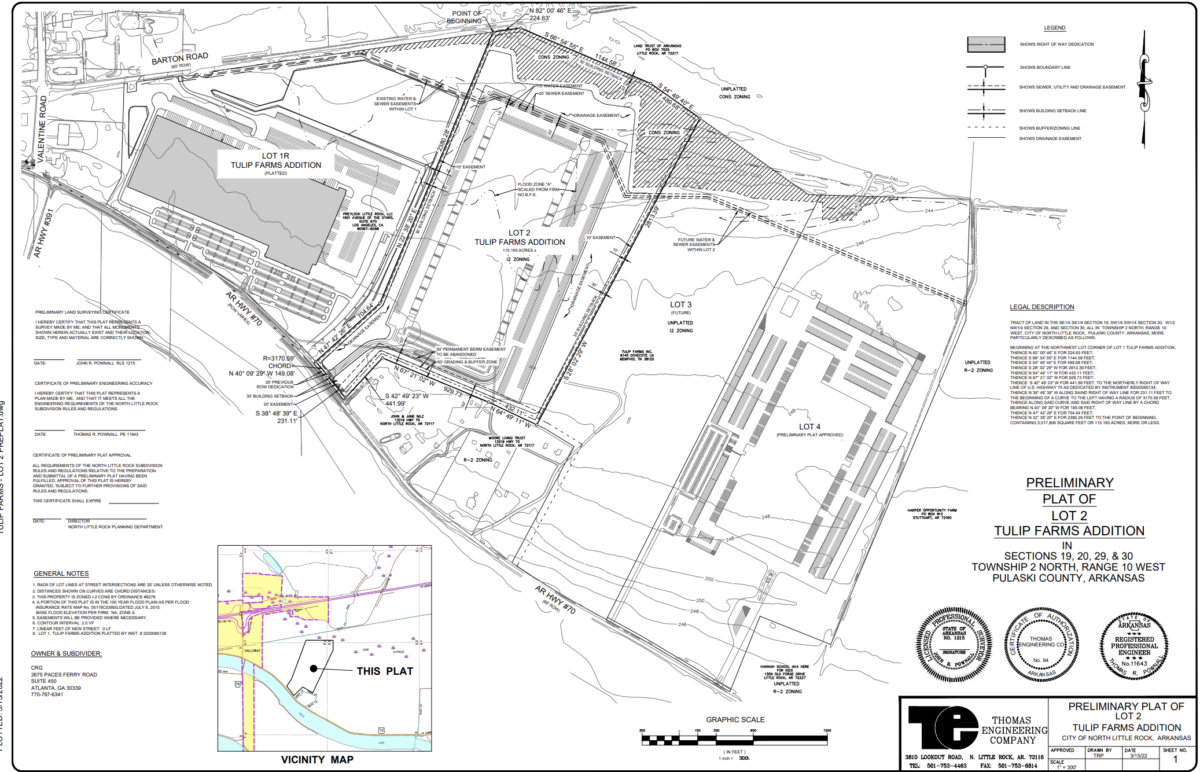