Read this month's issue
Browse the issue archives
Loading…
Advertisement
Home Arkansas Blog 65 years ago today history was made, but the work isn’t over 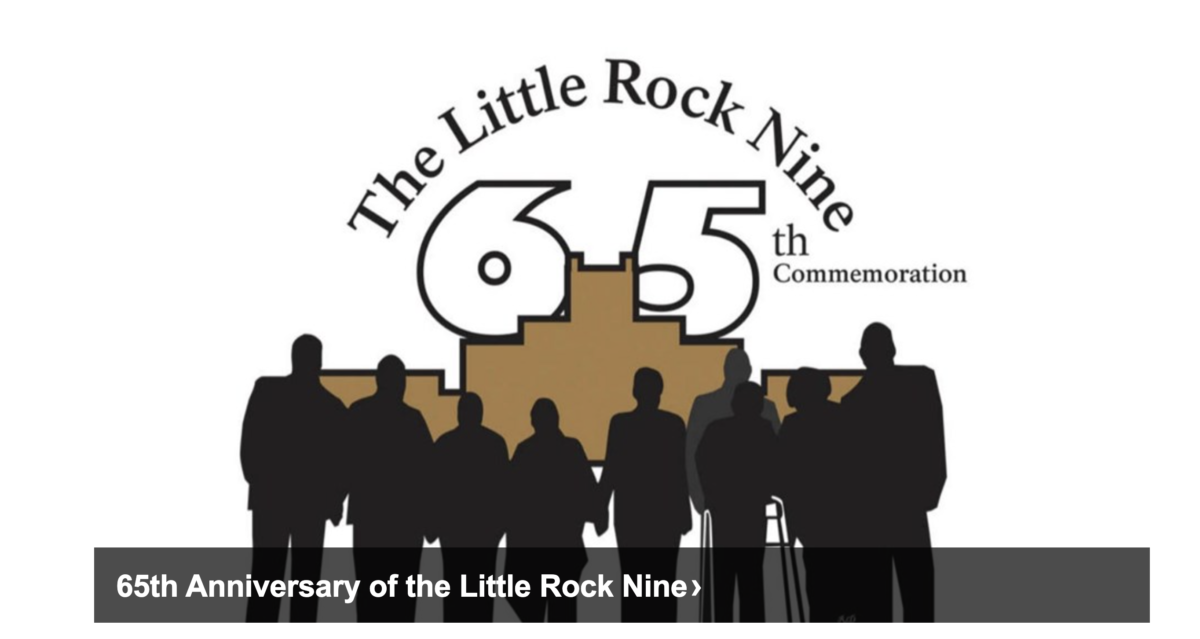 65th anniversary events today include a ceremony to rename the blocks of Park Street in front of Central High as Little Rock Nine Way.

Former President Bill Clinton and members of the Nine will participate in a program at 5 p.m. today at the Clinton Presidential Library. The event isn’t open to the public  because of limited space, but it will be streamed on the city of Little Rock’s government Facebook page and YouTube channel.

The Central High National Historic site has a useful timeline, beginning with the first public schools in Little Rock in 1853 (for whites only) and moving next to the Emancipation Proclamation before advancing to events closer to the desegregation crisis, including Gov. Orval Faubus’ resistance, violence in the streets and closure of Central the following year.

It is a good time to remember that while evidence of progress is abundant, progress can be reversed. Look no further than an Arkansas legislature intent on forcing preservation of monuments to those who defended slavery and, on the national stage, the violent rise of white nationalism and a U.S. Supreme Court rapidly deconstructing voting rights legislation.

Also from the Historic site are these biographies of the Nine, eight still living. I’d bet few could name them all or imagine what they and their families endured in making history.

Minnijean Brown Trickey graduated from New Lincoln High School in 1959. She received a Bachelor of Social Work degree in Native Human Services from Laurentian University and a Master of Social Work degree at Carleton University, in Ontario Canada.  Brown Trickey has worked in various settings committed to peacemaking, gender and social justice advocacy, youth leadership, diversity education and training, cross-cultural communication, and environmental issues. She served in Clinton Administration as Deputy Assistant Secretary for Workforce Diversity in the Department of the Interior. Brown Trickey continues to work as a teacher, writer, and motivational speaker; she is the subject of the critically acclaimed documentary, Journey to Little Rock: The Untold Story of Minnijean Brown Trickey.

After 60 years, the infamous photo of Elizabeth Eckford walking through the mob in front of Little Rock Central High School still serves as a symbol of white resistance against integration in the Civil Rights Movement. Along with the other eight students, Elizabeth faced her share of adversity within the walls of Central High and can recall numerous incidents of harassment and hostility at the hands of her white peers. After Governor Faubus closed all public high schools in Little Rock to prevent further integration during the 1958-1959 school year, Elizabeth moved to St. Louis, Missouri where she obtained a GED. Eckford served in the U.S. Army as a pay clerk, information specialist, and newspaper writer. She holds a Bachelor of Arts in History from Central State University in Wilberforce, Ohio. For her great contributions to social justice, Eckford has received many prestigious awards such as the Congressional Gold Medal, the NAACP Spingarn Medal, and the Humanitarian Award presented by the National Conference for Community and Justice. Today, Eckford is still a strong proponent of tolerance in every aspect of life.

Ernest Green is the first African American to graduate from Little Rock Central High School (May 1958). He holds a Bachelor of Science in Social Science and Master of Science in Sociology from Michigan State University as well as honorary doctorates from Michigan State University, Tougaloo College, and Central State University. Green served as Assistant Secretary of Labor for Employment and Training during the Carter Administration. He was appointed to Chairman of the African Development Foundation by President Bill Clinton and by Secretary of Education Richard W. Riley to serve as Chairman of the Historically Black Colleges and Universities Capital Financing Advisory Board. Green is a recipient of the NAACP’s Spingarn Medal, the Boy Scouts of America’s Distinguished Eagle Scout Award, the Urban League’s Frederick Douglass Freedom Medal, the John D. Rockefeller Public Service Award, and the Congressional Gold Medal.

Thelma Mothershed Wair received her diploma from Little Rock Central High School in 1960 after completing correspondence courses and transferrable summer school credits. She earned a bachelor’s degree in Home Economics Education from Southern Illinois University-Carbondale and received a master’s degree in Guidance and Counseling plus an Administrative Certificate in Education from Southern Illinois University-Edwardsville. Wair worked in the East St. Louis school system for 28 years – 10 years as a Home Economics teacher and 18 years as a counselor for elementary career education – before retiring in 1994. She also served at the St. Clair County Jail/Juvenile Detention Center in St. Clair County, Illinois and was an instructor of survival skills for women at the American Red Cross. In addition to the NAACP’s Spingarn Medal and the Congressional Gold Medal, Wair has received numerous awards for her professional contributions and community service including the Outstanding Role Model award from the East St. Louis Chapter of the Top Ladies of Distinction and an award from the Early Childhood/Pre-Kindergarten staff from the East St. Louis School District. She collaborated with Richard J. Hansen for a book narrating her experiences from Central High School entitled Education Has No Color: The Story of Thelma Mothershed Wair, One of the Little Rock Nine.

Dr. Melba Pattillo Beals finished her high school education at Montgomery High School in Santa Rosa, California. Beals earned a bachelor’s degree in Journalism from San Francisco State University, a Master of Arts in Communications from Columbia University, and a Ph.D. in International Multicultural Studies from the University of San Francisco. She has worked as an on-camera television reporter for KQED’s Newsroom, as an NBC-TV news reporter, and as a radio news talk show host for KGO, ABC radio, San Francisco. Dr. Beals founded the Department of Communications and Media Studies at the Dominican University of California. She has written four books based on her experiences at Central High School.  Warriors Don’t Cry: A Searing Memoir of the Battle to Integrate Little Rock’s Central High is a firsthand account of the experience that Beals and the Little Rock Nine encountered at Central High School. Other works include March Forward, Girl, the prequel to Warriors Don’t Cry; White is a State of Mind, the sequel to Warriors Don’t Cry; and I Will Not Fear, an examination of her faith through her journey of terror, oppression, and persecution. Dr. Beals is the recipient of the Robert F. Kennedy Book Award, the Spingarn Medal, the Congressional Gold Medal, and is a communications consultant and motivational speaker.

Gloria Ray Karlmark graduated from Kansas City Central High School in 1960. She earned a bachelor’s degree in Chemistry and Mathematics from the Illinois Institute of Technology (IIT); post-graduation, she joined the ITT Research Institute as Assistant Mathematician on the APT IV Project (robotics, numerical control, and online technical documentation) and collaborated with Boeing in Seattle, McDonnell-Douglas in Santa Monica, and the NASA Automation center in St. Louis. Karlmark has served as a teacher, mathematician, systems analyst, and technical writer. She founded and served as the Editor-in-Chief for Computers in Industry, an international journal of computer science and engineering. Karlmark also worked in the Netherlands for Philips Telecommunications in Hilversum and Philips Lighting in Eindhoven.

Dr. Terrence Roberts graduated from Los Angeles High School in 1959. He earned a bachelor’s degree in Sociology from California State University and a master’s degree in Social Welfare from the University of California at Los Angeles. In 1976, Roberts was awarded a Ph.D. in psychology from Southern Illinois University and later became Department Chair of the Psychology program at Antioch University, Los Angeles. He is the author of Lessons from Little Rock, a memoir of the 1957-58 school year at Central, and Simple, Not Easy, a reflection on community, social responsibility, and tolerance. Dr. Roberts is CEO of Terrence J. Roberts & Associates, a management consultant firm devoted to fair and equitable practices. He maintains a private psychology practice, conducts lectures, and presents workshops and seminars on a wide variety of topics. Dr. Roberts is the recipient of the Spingarn Medal and the Congressional Gold Medal.

Jefferson Thomas returned to graduate from Little Rock Central High School in 1960. He received a Bachelor of Business Administration degree from Los Angeles State College and served as a staff sergeant in South Vietnam with the 9th Infantry Division, United States Army.  Thomas, with his father, operated the family-owned Retail Sales Business, worked as an Accounting Clerk and Supervisor for Mobil Oil Corporation – Los Angeles Credit Card Center, and later as an Accounting Clerk with the Department of Defense.  He was the recipient of an Honorary Doctorate of Humane Letters from Ohio Dominican University in recognition of his life-long efforts in human rights and equality.  Jefferson Allison Thomas died on September 5, 2010 in Columbus, Ohio.

Carlotta Walls LaNier returned to graduate from Little Rock Central High School in 1960. LaNier attended Michigan State University for two years before moving with her family to Denver. In 1968, she earned a Bachelor of Science from Colorado State College, now the University of Northern Colorado. In 1977, she founded LaNier and Company, a real estate brokerage firm. LaNier serves as president of the Little Rock Nine Foundation and is a member of the Denver Chapter of The Links, Incorporated, and the Johnson Legacy, Inc. Board of Directors. In addition to the NAACP’s Spingarn Medal and the Congressional Gold Medal awarded to her as a member of the Little Rock Nine, LaNier is the recipient of an Honorary Doctorate of Humane Letters from the University of Northern Colorado and is an inductee in the Colorado Woman’s Hall of Fame, the Girl Scouts Women of Distinction and the National Women’s Hall of Fame. She is the author of A Mighty Long Way: My Journey to Justice at Little Rock Central High School. 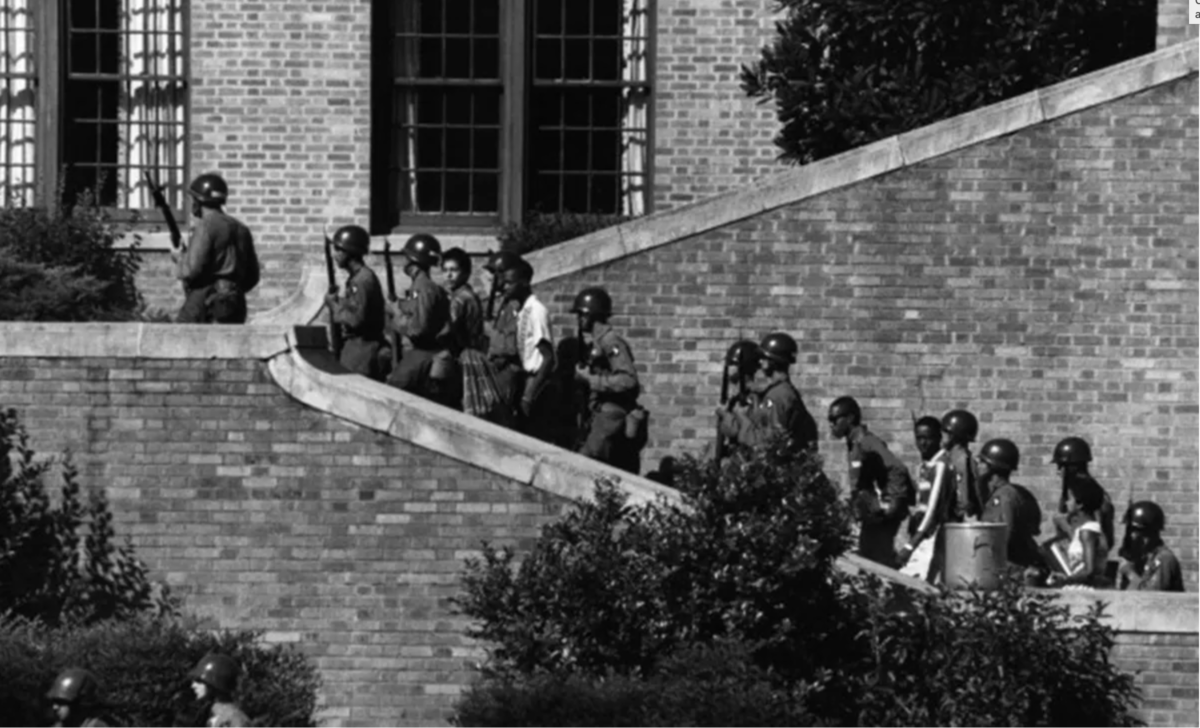