Arkansas Times publisher Alan Leveritt has lived on his great-grandparents’ farm in north Pulaski County for 40 years. This is the third in a series of columns about day-to-day life on the land where he raises heirloom tomatoes and other crops for local restaurants and the Hillcrest Farmers Market.

Andre Simon was an irascible Swiss baker and chef who came to Little Rock with the Jacques & Suzanne’s crew in the late 1970s. He operated Andre’s restaurant until he was fatally shot in a botched robbery involving an ex-employee at what is now Ciao Baci.

But before all that he nearly died one night after picking mushrooms.

In what may be an apocryphal story, Simon had been foraging mushrooms out near Lake Maumelle and accidentally got a destroying angel mixed in with his culinary mushrooms. Before he started back to Little Rock he ate it, and on the way, became sick, pulled over and fell out of his car onto the pavement. A Good Samaritan got him to the ER where they prepared to pump his stomach. Suddenly, his eyes flew open and in his heavy French/Swiss accent, he shouted out to no one in particular, “I am Andre the chef! Murdered by a mushroom!” And then he went unconscious but was saved by the stomach pump.

For decades I have raised shiitake mushrooms on my farm, foraged for oyster mushrooms in November and December, morels the week that the dogwoods bloom, orange chanterelles in June and lion’s mane or bear’s paws in early fall. Nothing else looks like these mushrooms. Stick to these varieties and you will never have an Andre moment. I can assure you they are foolproof, as my continued survival can attest.

On a cold, wet early December morning when the only color in the woods is varying shades of tree bark, it feels like I am a kid again hunting Easter eggs. My eyes are scanning dead tree trunks and windfalls, until out of the corner of my left eye I notice splashes of white and tan against dark, dead wood. Oysters! I have found the golden egg. There may be a pound or two or 200 pounds depending on the host log, moisture and who knows what else. They will have gills underneath and will be tender to the touch. If they are tough and leathery with pores underneath instead of gills, it is a wood fungi that, while not poisonous, is inedible. Once you see a photo of oysters, you’ll realize there is nothing in the forest growing on dead wood that resembles them.

And here is the coolest thing about oysters. They are one of the very few carnivorous mushrooms, feeding on nematodes. They poison and paralyze these tiny roundworms and then inject their filaments into the corpses and dissolve them.

Think about it. Oysters mushrooms are one of the only vegan foods that eat meat.

Sautee them in garlic butter. Grill them, smoke ’em, add them to stews — they are very versatile. I get amused sometimes when wine lovers start talking about “hints of blueberries and nutmeg,” trying to describe how the wine smells. With oysters, think “fish and earth,” or at least that’s my take. They’re delicious.

When you can see your breath, the sap is down and the leaves are off the trees, it’s time to get your chainsaw and start cutting oaks and sweet gums for shiitake logs. Oaks will last longer, but sometimes sweet gums are more plentiful and they work fine. I cut live logs only, 3-5 inches in diameter and about 3-4 feet long. This is heavy, rough work. Three winters ago my girlfriend, Suzanne Boscarolo, and our friends Alan and Diana New inoculated over 100 logs using several 5-pound bags of sawdust impregnated with white shiitake mycelium. Using a special collared drill bit and a brass inoculating tool, we drilled about 60 holes in each log, injected the mycelium with the brass inoculator and sealed the hole with hot wax. In four or five months, the mycelium will have colonized the length of the log to the point you might notice white fungus on the log ends. Maybe in late spring but more probably in the fall when the rains come and the temperature changes, you will come out one morning and damn if it isn’t Christmas! If you are lucky and you kept your logs damp during the hot, dry weather and the squirrels didn’t scratch the wax off, you may have 20 or 30 beautiful shiitakes on each log, ready to pick for dinner. It will take three to five years for the shiitake mycelium to turn the log into sawdust and you can expect two or three flushes per year for the life of the log. I buy my spawn and all the needed equipment from Field and Forest Products out of Wisconsin, but there are many other reputable suppliers on the internet.

The week that the wild dogwoods bloom usually finds me squatting in my field or hoop houses planting hundreds of heirloom tomatoes — with help if I am lucky. But that is also, depending on the rains, the week that the morels will come out in a particular section of my bottomland bordering the headwaters of Bayou Meto in north Pulaski County. One time at the farmers market in Portland, Oregon, I saw a huge woven basket with perhaps 50 pounds of morels. I will be lucky to find a dozen and then only on this one place on the farm. I think morels are far and away the best-tasting mushroom on earth, though I admit to having never tasted a truffle mushroom, which is on my culinary bucket list. Slice your morel vertically so you have two pieces shaped like a boat. Give them a little olive oil, stuff them with prosciutto and ricotta cheese and bake briefly. Heaven. And like oysters, once you see one you won’t mistake anything else for a morel.

Last June found me at the Hillcrest Farmers Market peddling 50 pounds of chanterelle mushrooms that a friend and I had found in the bottoms near my morel patch and in the woods off Highway 107. Bright orange, flat and gilled, chanterelles can cover the forest floor. When you find a patch, you can be there an hour picking. Allsopp Park is locally famous in Little Rock for chanterelle picking. With the first rain in June, head for the woods! I like to convert my haul into duxelles, sauteeing the mushrooms with butter, onion or shallots, garlic and dry vermouth or white wine. I freeze them in pint Ziplocs and use them all winter to stuff chicken thighs, make a cream sauce or whip up a mushroom soup— the possibilities are practically endless. 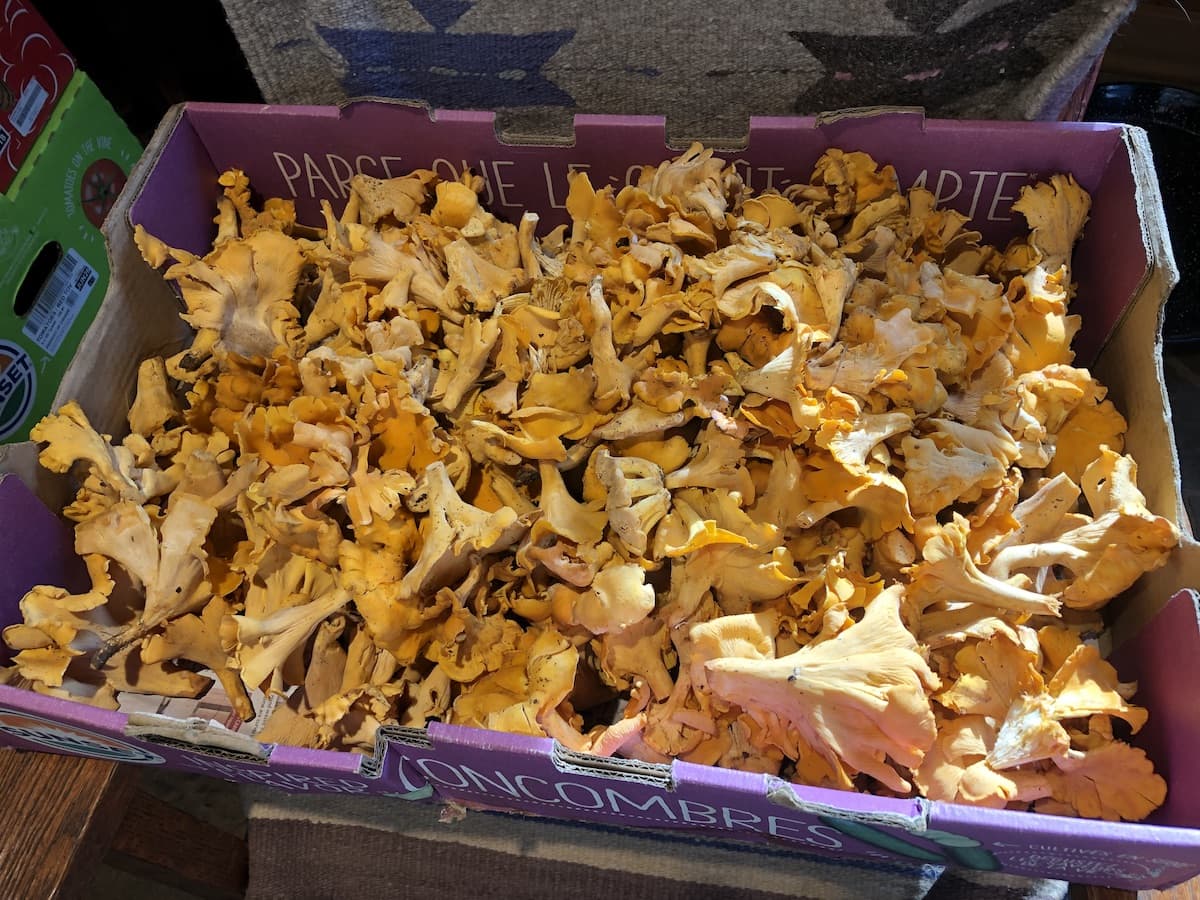 Here is one mushroom that I prize but don’t recommend you collect it unless you have a very knowledgeable companion.

I have lived on my farm for 40 years, and during the hot, dry month of August, mushrooms disappear down in the woods.  But during an unusual and very wet August several years ago I encountered dozens of beautiful red/orange mushrooms while walking along Bayou Meto that had pushed up through the leaves. I assumed they were the poisonous amanita muscaria or fly agaric. There are many different kinds of amanitas, including the destroying angel, which may have been what Andre got into. Amanitas account for 95% of mushroom fatalities. But these mushrooms were solid red with no white flecks, typical of the fly agaric. Curious, I texted a photo of the mushrooms to my friend and mushroom expert Tim Jones, asking if it might be edible. He replied something to the effect, “Well, it won’t kill you.”

It was actually an amanita caesarea, or Caesar’s mushroom, a delicious North American variant of a similar mushroom popular in Italy. Legend has it that the Roman Emperor Claudius loved this mushroom and was murdered by his wife, Agrippina, after she mixed in some fly agaric mushrooms into his Caesar’s mushrooms.

That night I sliced the Caesar’s mushrooms very thin, tossed them in olive oil with some rosemary and lemon juice. Caesar’s mushrooms, unlike most, are eaten raw as they lose texture and some of their nutty flavor when cooked. That said, I called Suzanne to let her know what I was doing in case things went south. I confess my throat literally contracted just before I took my first bite, then it was bliss. Next to stuffed morels, these were the best mushrooms I have ever tasted. I waited a few minutes just in case and then I went through the whole sack.

One of the best ways to learn about wild  mushrooms is to go with experts at the Arkansas Mycological Society on one of their mushroom rambles. Jay Justice (mushman.jj@gmail.com) is the moving force behind the society, and he is the best person to contact to learn about the next excursion.

One fall day I went with them to Woolly Hollow State Park north of Greenbrier and, with the help of a member, came across my first bear’s paw or lion’s mane. It was about the size of a baseball and really looks like a bear’s paw, with an almost furry surface made up of little teeth-like filaments. I’ve seen pictures that look more like icicles hanging off a tree, but the ones I have found do not have long tendrils. Bear’s paw or lion’s mane always grows on a wound on a live tree. Once, I noticed a hardwood by the road that had been rammed by a car and had a huge bear’s paw growing out of the wound.

Delighted by my find at Woolly Hollow, I drove home that afternoon, and as I pulled into my house I noticed a huge bear’s paw on a tree directly across from my driveway. It had been damaged years ago and the fungus was growing where the bark had been permanently knocked off. I was blind to what was right in front of me until my ramble that day. I harvested bear’s paw from that tree for almost 20 years, with five- to 10-pound fungus common. They are not my favorite mushroom in that they are pretty mild and tend to soak up whatever flavors are in the pot. But they are most prized for their supposed healing properties, particularly with dementia and other cognitive diseases.

Arkansas is a culinary wonderland when it comes to mushrooms. There are so many more delicious, edible mushrooms in the woods and in your yard than what I have described here. I spend too much time in the field and not enough in the forest or I would know more. Mushroom hunting is a great excuse to get out into the woods year-round and I promise, when you find a flush, it truly is like Christmas morning for adults.