We know of at least one student who was suspended for a protest walkout Tuesday at Conway High School and are hearing there were more. We are trying to confirm the numbers with the school administration.

One parent, Betsey Bakker, tweeted that her “child participated in the protest and was placed in school suspension as a result.”

“I am seeking a legal recourse for my child who is a CHS student,” Bakker wrote.

Trans rights are human rights! My child was directly impacted yesterday. Conway School District is out of control! https://t.co/8GxYr7FMkt

School spokeswoman Heather Kendrick said today that according to the district’s attorney, the Freedom of Information Act and FERPA — the Family Educational Rights and Privacy Act — “prohibit the release of any student records, including but not limited to student disciplinary records.”

I never expected to see student records that are exempt under the Freedom of Information Act. I do want numbers stating how many students were suspended over the walkout and for how long. That information would not violate anyone’s legal rights.

Kendrick later acknowledged that KARK-TV had asked if students were suspended for participating in the walkout “and the district answered no they were not.”

I also have asked for other correspondence among board members, administrators and others involving the protest. Let’s hope Superintendent Jeff Collum, who loves to delete emails, doesn’t hit any mass-delete key too fast.

As we reported Wednesday, students were warned and threatened over an intercom system that they might be considered “insubordinate” or even “subversive” if they participated in the walkout scheduled to happen just 30 minutes before school was to end anyway. We’re also told that some students were detained in the auditorium.

Students were protesting two recent school board policies that target transgender youths and adults. One deals with gender and restrooms; the other deals with overnight school trips. Students also were objecting to the board’s banning of two books about transgender youths. They were further upset about proposed policy 5.5.2 to restrict or ban the teaching of dozens of concepts, including much of our nation’s and world’s history, in the school district.

Because not a single speaker from the public was allowed at Tuesday night’s board meeting, several protesters showed up carrying signs and chanting “Trans Lives Matter” and “Black Lives Matter.” All were peaceful. Still, three adults were arrested for refusing to disperse.

Also, Assistant Superintendent Joel Linn said Wednesday that a “draft of policy 5.5.2 was discussed by the board at the September 6 work session. This policy has not been on any agendas since that time and is not currently under consideration.”

Of course, there’s no tape recording of that Sept. 6 meeting because the board flagrantly violated state law and didn’t record it. The administration told us it would begin recording all meetings. Well, that wasn’t quite true:

“After consulting with our attorney, the district’s understanding is that lunch meetings at campuses where the board takes no action, has no agenda, and only participates as observers of a student or administrator-led program are not required to be recorded,” Linn said in an email.

The problem is that by notifying the public of these lunch meetings, the board has automatically acquired the right to take action if it suddenly changes its mind. So, there’s no way to know without a recording or without someone — like me — going and sitting there and taking notes on what board members eat and more importantly say to each other. So, I may be watching the board members dine soon — not my idea of a scoop. More than likely, I’ll show up unannounced at some but not all luncheons.

Also, please note that Linn did not say the forbidden-topic policy was rejected as board member and self-declared “patriot” Linda Hargis contended during Tuesday night’s meeting. Linn said it’s not “currently under consideration.” The word “currently” is important. Things can change with this school board fast.

In another development, the Faulkner County Coalition for Social Justice has issued a statement decrying the school district’s actions during the walkout and subsequent protest by roughly 30 people outside Tuesday’s board meeting. 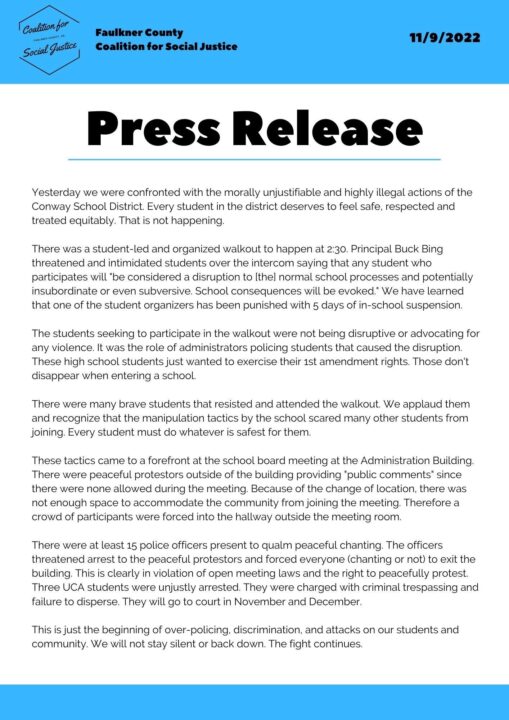