The city of Little Rock released more documents on Tuesday related to LITFest, the controversial city-sponsored festival that Mayor Frank Scott Jr. canceled at the 11th hour after reporters noted a string of ethical and legal issues. The newly released documents were previously held by Think Rubix, the contractor hired to produce the festival that didn’t happen. The documents include sponsorship details and performance contracts.

Christina DePriest, a paralegal in the city attorney’s office, said that these documents were not produced as part of the initial Freedom of Information Act release because the city did not have possession of them. DePriest said Think Rubix provided a flash drive  Monday afternoon and the information was distributed to requestors.

In an interview Tuesday, Think Rubix Principal Tristan Wilkerson shared some of his disappointment in how the festival spiraled out of control and ultimately fizzled completely.

“Think Rubix did not receive any compensation from the city of Little Rock, nor the sponsors for its services in producing and liaising this event,” Wilkerson said. “We worked our butts off with volunteers and community partners to try to bring together a festival with less than three months to plan and a shoestring budget.”

Spencer Watson, the city spokesperson, said that Little Rock has not received any funds from Think Rubix related to LITFest. Wilkerson said Tuesday that the unspent sponsorship money was refunded to the contributing organizations, and the firm did not receive a dime from the $45,000 contract with the city.

All contracts were paid for in full, despite the cancellation, Wilkerson said. He also noted T-shirts, water bottles and other swag items were prepped for the festival but went unused.

He said that the cancellation of LITFest negatively impacted Little Rock’s residents, the local talent that was set to perform and his team — “the people who are paid fair wages to make sure that they can be first-time homebuyers and take care of their children and be upwardly mobile in a place like Little Rock, [which] has historically not created opportunities for young people like that.”

According to an accounting summary, four sponsors contributed a total of $165,000, though only the presenting sponsor’s money was received early enough to be used for expenditures — Axon Enterprises Inc., a taser manufacturing company that supplies gear for the Little Rock Police Department, which gave $150,000.

Three other sponsors each gave $5,000, but the money was not received in time to be spent, Wilkerson said. Those sponsors were Wright Lindsey Jennings, a law firm where At-Large Director Antwan Phillips works as an attorney; Lime, the electric scooter company that provides rides in Little Rock and The Ron Redwing Group, a public strategies firm based in Memphis.

Sponsorship dollars were routed through a nonprofit organization connected to Think Rubix, The Foundation for Social Impact. According to the accounting summary, each of the $5,000 contributions were refunded in full, but Axon was refunded a portion of its contribution — an unspent $56,144. Wilkerson said he could not comment about the agreement with Axon because he said that he was not involved.

The inaugural LITFest was set for Oct. 7-9, but City Manager Bruce Moore canceled the city’s contract with Think Rubix on Oct. 3, which led to Scott to call off the festival later the same day. 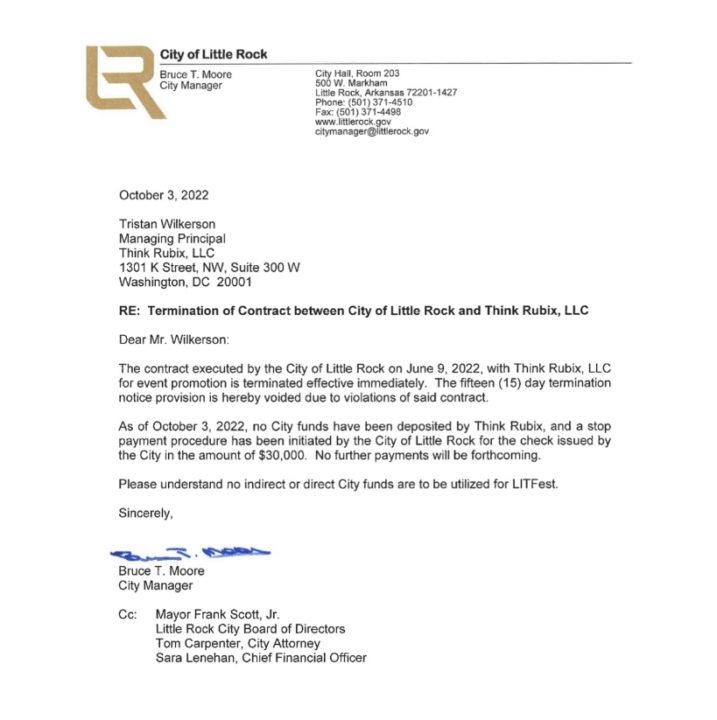 Wilkerson said that taking on LITFest was like a labor of love, and his firm has been left with a “pretty big void.” The $45,000 contract with the city was expected to pay employees’ wages while they worked on the festival, and with the cancellation, Wilkerson said the company has taken a loss.

Think Rubix is a minority-owned public affairs firm that was selected for the event organization in April 2022 through a request for qualifications (RFQ) process done by the city. Think Rubix secured the contract the second time the city put it out for bid because the city’s first bid did not end in a contract.

The city announced that Think Rubix would lead LITFest in April, one week after Think Rubix announced that Charles Blake, the mayor’s former chief of staff, joined the company. In the statement, the city assured that Blake was not involved in the submission process, but public records later showed that was false.

Though Think Rubix was picked to organize the event in April, Moore signed the contract months later on June 9. Wilkerson said the Think Rubix team advised city officials to wait until after the November election to hold the event, but members of the Scott administration insisted on holding it in October.

Wilkerson said that the planning for a wedding with 30 people could take longer than his firm was allotted for a festival that was expected to draw 20,000 attendees.

“We were asked to perform a miracle,” Wilkerson said. “That’s a lot to ask.”

Upon the festival’s cancellation, Scott said that both the city and Think Rubix acted legally within “the normal bounds of contracting and procurement.” He also said that he was “disappointed that divisive politics negatively affected the vision and impact of this inaugural festival.”

Wilkerson echoed similar sentiments on Tuesday and argued that Think Rubix has not been represented fairly in press coverage. In August, the Little Rock Chamber of Commerce awarded the firm as the 2022 Minority Business of the Year; Wilkerson also was recognized as the Outstanding Minority Executive of the Year.

This distinction, as well as the firm’s work to extend the millage for the Little Rock School District, and joining in the Build Academy — a Little Rock business and leadership development program — got overlooked in the LITFest coverage, Wilkerson said.

“We’ve moved on because we have work to do,” Wilkerson said.