Arkansas Times publisher Alan Leveritt has lived on his great-grandparents’ farm in north Pulaski County for 40 years. This is the latest in a series of columns about day-to-day life on the land where he raises heirloom tomatoes and other crops for local restaurants and the Hillcrest Farmers Market.

Andy Jones, a Clarksville turkey farmer, pulled his big RAM 2500 pickup through my farm gate one Monday towing a Bull Neck triple-axle dump trailer full of turkey manure and litter. In three loads, he delivered 24 tons of the stuff, about enough to fill a tractor trailer. At first it smelled like I had a feedlot of dead animals laying in my front yard, but then I thought, nope, smells like really good organic heirloom tomatoes. In the old days people said the Pine Bluff paper mill smelled like money. Well, so far, most of the money has eluded me but I’m sure about the tomato part.

That truck was impressive. It didn’t run so much as it growled as it rolled slowly down my gravel drive. Jones is a young guy with a cue ball head and a great red beard. When he eased out of the front seat I noticed the holstered pistol hanging from his belt. I’m old enough to remember when only police officers carried pistols on their belt, but I know that time is passed. Still I am never quite comfortable at first with an armed stranger.

I asked Jones about the gun.

“The way the world is, you can’t always trust people,” he said. “I kiss my wife and child goodbye every morning and tell them I’ll see them tonight. I intend to keep that promise.”

Jones is also a member of the Johnson County Rural Fire Department No. 4, and when he responds to an emergency it isn’t always a fire. “Sometimes it might be a drug situation of some kind of violence. I also keep a fire department bulletproof vest in the truck.”

I visited with Jones and realized that while he might not trust strangers, he is also the kind of guy that would stop and help someone on the side of the road with a flat tire. Such is the odd yet hopeful character of rural Arkansas.

My tomato and vegetable farm consists of about 40 150-foot-long raised beds and three long hoop houses. Every three years I go on the hunt for some kind of manure to amend my soil. I don’t use chemical fertilizer and am dependent on manures and compost. Chicken or turkey litter is hard to find, especially with transport, which is most of the expense. Jones charged me $60 a ton delivered from Clarksville. I’ll take turkey or chicken litter, whichever I can find.

Jones has four 500-foot turkey houses with 16,000 birds in each. He will rotate about three and a half flocks each year, cleaning out the houses after each. I happened to catch him right after he sent off his Thanksgiving turkeys. In my experience, chicken manure is easiest to find about the first of the year when many houses are cleaned.

Starting Thanksgiving week, I began shoveling those 24 tons of turkey manure onto my raised beds, unearthing and repairing last year’s drip tape and then gently mixing the soil and manure with my walk-behind tiller. During the hot summer temperatures, the field rats become desperate for water and gnaw through the irrigation lines, causing the breaks. The final step before planting in the spring is to push about 30 1,000-pound rolls of spoiled hay down the length of the beds, smothering everything in about eight inches of hay mulch. I used to lay plastic mulch down the beds, which was a lot faster but the hay mulches the raised beds and the aisles and feeds the soil as it slowly decomposes. When the hay is down I’ll use a 20-pound pile driver to sink about 400 6-foot oak stakes into the rows and then run nylon baling twine between the stakes in what is known as the Florida Weave, which will hold the tomato plants upright as they grow.

In spring, friends are surprised that I can do this with one good part-time worker, but the secret is we take all winter and spread out the labor. And my other secret is young William Johnson, who does some of the heavy work I can no longer easily do alone. It takes two men to push the hay rolls down the aisles, for example. Decades ago I hired a housekeeper, Linda Smith, who was part of a small, very conservative church in Cabot. The women and girls wear long dresses and keep their hair up. You might mistake them for Mennonites. I enjoyed many conversations with Linda, and soon Ed, who was her pastor, was mowing our place, and his sons and later other church members worked with me in the field. We have little in common theologically but these are some of the finest, hard-working people I have known. Ed is retired now and William is helping out with the preaching until the church settles on a permanent pastor. They have all been a great help at the farm.

When I was in college I thought of farming as repetitive and mindless, as if plowing rows was all there was to it. Now I know that every season brings with it new challenges and new opportunities to learn. As William and I walked the field recently and talked about all that needed to happen between now and March, I was excited to tell him about my big crazy plan for growing in the No. 3 hoop house, a 96-foot by 30-foot unheated plastic greenhouse.

Hoop houses are used for season extension. A warm weather crop can be planted in the hoop house a month before one plants the same crop outdoors, and a fall crop will last about a month longer into the winter. For too many years I have planted heirloom tomatoes in all three hoop houses on March 15, about five weeks before tomatoes can be planted outside. I get quality, organic tomatoes, which ripen before the stink bugs have even hatched.

But over the past couple of years I had noticed some of my healthy hoop house plants suddenly wilted and died just as they were putting on tomatoes. This year I had a lab in North Carolina graft my heirloom tomato seedlings onto wild, disease-resistant rootstock. It was a disaster. Every single tomato plant in all three hoop houses died within two weeks of one another, all of them loaded with small green tomatoes. When I sent the dead plants to the University of Arkansas for autopsy, the news could not have been worse. The soil was infected with deadly bacterial wilt, which has no cure other than not planting anything in the nightshade family, which includes tomatoes, for at least three years. Hoop houses are expensive real-estate, the 96-footer cost $12,000. So each year I filled it with my most expensive crop, heirloom tomatoes. Now I am paying for it.

But just as one hoop house door closes, another has possibly opened. Driving home one afternoon I caught the tail end of a piece on KUAR-FM, 89.1 about organic farmers converting some of their hoop house crops to hydroponic as a way to deal with soil disease. I got online and after talking to a hydroponic supply outfit in Canada, was directed to, of all places, Rose Bud (White County) and Randy Platow at Complete Growing. Platow struck me as sort of an eccentric enthusiast, an engineer by training who lives to spread the hydroponic gospel. 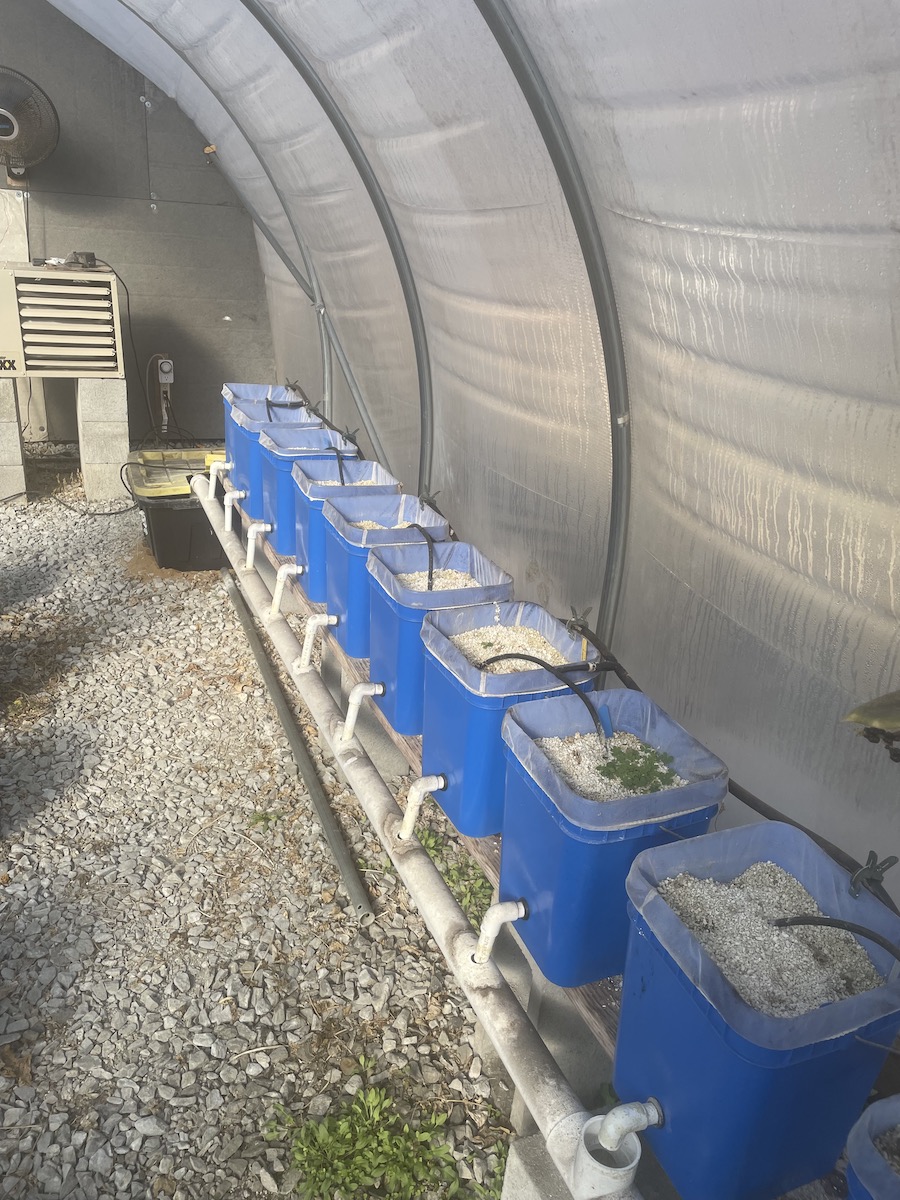 DUTCH BUCKETS: The feeder lines on top of the buckets provide nutrients. The drain pipe below recycles the nutrient-rich water back to a holding tank.

I drove up on a Saturday to Platow’s place off a county road near Rose Bud. It was a somewhat random collection of double-walled, heated plastic greenhouses full of papaya, orange and mango trees, along with a huge tank of 1-pound tilapia fish. Waste from the tilapias sinks to the bottom of the tank and gets pumped out into a reservoir. There, the fish feces nourish lettuces and greens floating on Styrofoam sheets, their roots extending through holes in the Styrofoam.

Platow designs and sells hydroponic systems for everything from the home gardener to a medium-sized operation like my own. We determined that my hoop house could hold 283 four-gallon “Dutch buckets,” as the hydroponic containers are called, each with a tomato seedling anchored in pearlite. A nutrient drip would run down the row atop the buckets and the excess nutrient water would then exit through a bucket drain into a recycle pipe just below the bottom of the bucket. The water is constantly recycled to the plants using very little water.

I thought the solution was elegant. Using Platow’s system I could give the soil a rest for several years and still grow early heirlooms under the protective plastic. I plan to grow Moon and Stars watermelons and Ambrosia cantaloupes in one of the other infected hoop houses and Kentucky Wonder pole beans and Nickel French filet beans in the other. These crops, while not as valuable as the heirloom tomatoes, can be planted directly into the rich soil of the hoop house since they are impervious to bacterial wilt.

I’ll keep you posted on how the hydroponic experiment unfolds, or possibly unravels.

Throughout all of this, I have become fascinated by the whole idea of grafting tomato plants much like one might do with fruit trees. The idea is to combine the most vigorous, disease-resistant rootstock with the variety that has the most desirable fruit. Heirloom tomatoes have little disease resistance, which is why they have been crossbred into hybrids. The problem with hybrids is, we often trade disease resistance and yield for taste. So grafting is an alternative. At the Hillcrest Farmers Market I noticed that my neighbor, Bob Barnhill of Barnhill Orchards, had beautiful Cherokee Purple tomatoes into the fall, long after my Cherokee Purple vines had given up the ghost. He told me they were grafted plants and put me in touch with Grafted Growers in North Carolina. The grafted tomatoes they did for the hoop houses were a loss but I planted the same grafted plants outside next to ungrafted plants of the same variety and while the regular plants were dead by mid-August, the grafted plants were still bearing at frost. So this season my hydroponic hoop house heirlooms, which will not touch soil, will be ungrafted and the 1,300 outside heirloom tomatoes will be grafted to a rootstock called RST-04-105. At about $2 a plant that represents a significant investment but in an increasingly hot, humid and disease-prone environment, I’m gambling it will pay off.