Razorback baseball fans are just about as pissed off as Taylor Swift’s “verified fans” are right now, and here’s why: 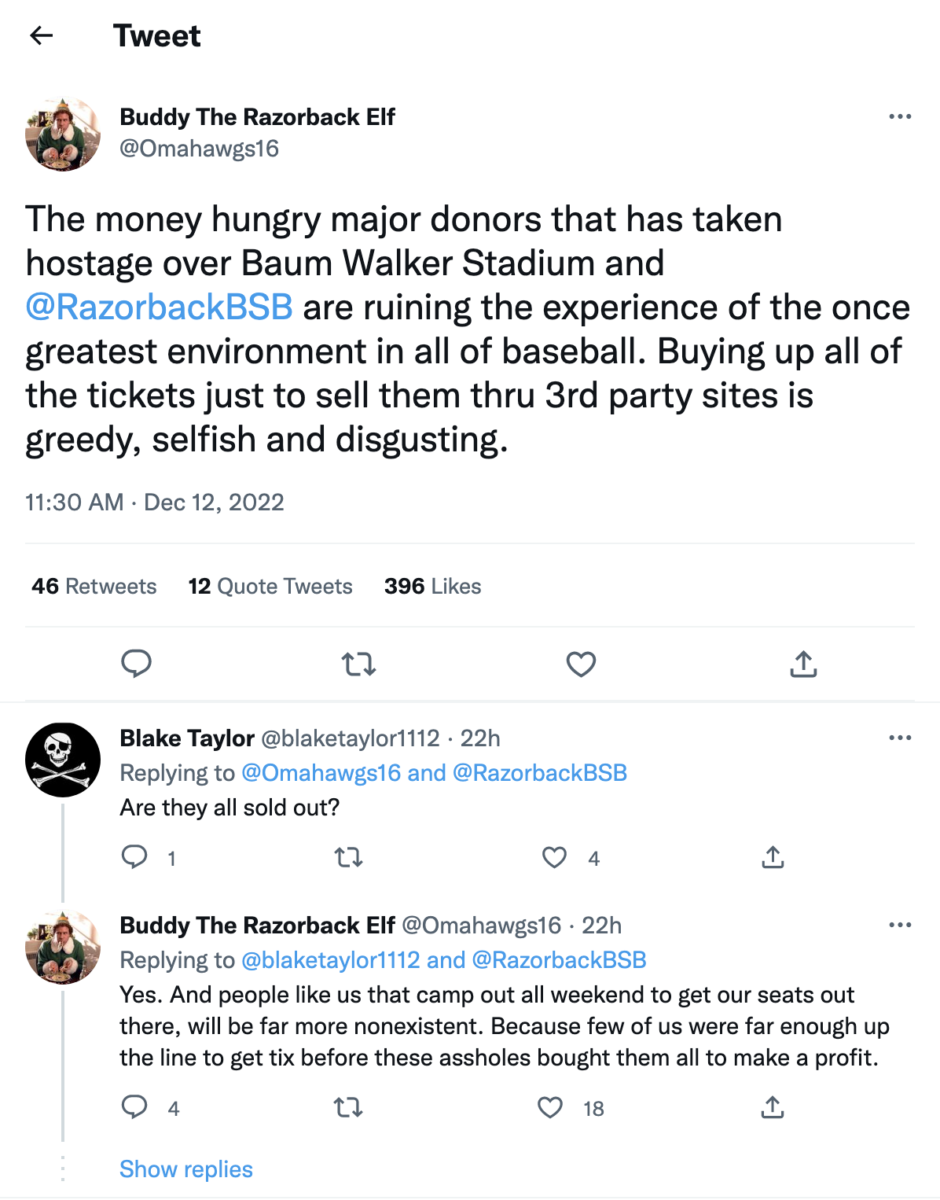 In short, by the time the general public gets a chance to buy baseball tickets, they’ve been swooped up in presales for season ticketholders, and those who line up outside Baum Walker Stadium in droves to secure seats are crying foul. I asked longtime Razorback baseball fan Hognoxious, a staunch proponent of the sport’s working-class disposition since the George Cole Field days (and, full disclosure, my father), to weigh in, and here’s his take:

The people who donate a lot of money to Razorback Athletics wanted to know where their tickets are when we have regionals and super regionals. They were told that those tickets are for season ticket holders. The response from big money donors was “How much money is it going to take?”

So they restructured the donation requirements to buy season tickets for baseball. It was a gamble for them that donors would actually buy the season tickets. They did, because they want those seats in May and June.

The seats are empty for the first half of the season, but that’s not really any different than it always has been. The Athletic Director gets cussed, but it is the age old supply/demand problem the Foundation had to deal with. This was done several years back with football, and they lost a lot of long time fans who couldn’t get their tickets without paying exorbitant donations. …

Last year’s season tickets for me cost six times more than the previous five seasons combined.
People get all worked up about third party (StubHub) prices they see online, but the reason they can SEE those prices are because they aren’t SELLING at those prices. Some sell extra tickets at reasonable prices, but the don’t stay public long before they are purchased. (I can vouch for that).

I don’t blame people for being mad. I knew in 2019 this was coming to seriously damage my favorite sport. It sucks. But what I said way back in the 80s is still true:
“Bobby, they should put you down front for basketball games instead of those big money people that sit on their hands!” No. Because without their money, I don’t have as good of a team to cheer.