Governor-elect Sarah Huckabee Sanders brought jokes and her dad to Saturday’s Freedom Fest, the family-friendly inauguration barbecue that launched what’s set to be a multi-day parade of conservative fervor as the Arkansas governor’s mansion deepens from red to redder.

Does that sound negative? A Sanders supporter politely requested that we keep the coverage “good” and “accurate,” which is always our goal here at the Arkansas Times. And the Saturday event at The Hall was objectively good! Billowing smoke from the hamburgers and hotdogs on the grill, visible from I-630, made it easy to find. And glittery red, silver and blue spangles and balloons bobbed at the entrance, matching the patriotic fashion choices of most of the attendees.

The Hall, an airplane hangar-like music venue painted flat black from floor to ceiling, reverberated with a not-too-loud playlist of what we hear are some of Sanders’ go-to campaign event songs: “Rhinestone Cowboy,” “Don’t Stop Believing,” some Johnny Cash and Hillsong.

Children attempting to tame a mechanical bull rigged safely over an inflatable bouncy floor was the main draw until gubernatorial son turned gubernatorial brother David Huckabee (yes, the one in the dog story) took the stage to introduce his sister, our governor-to-be. 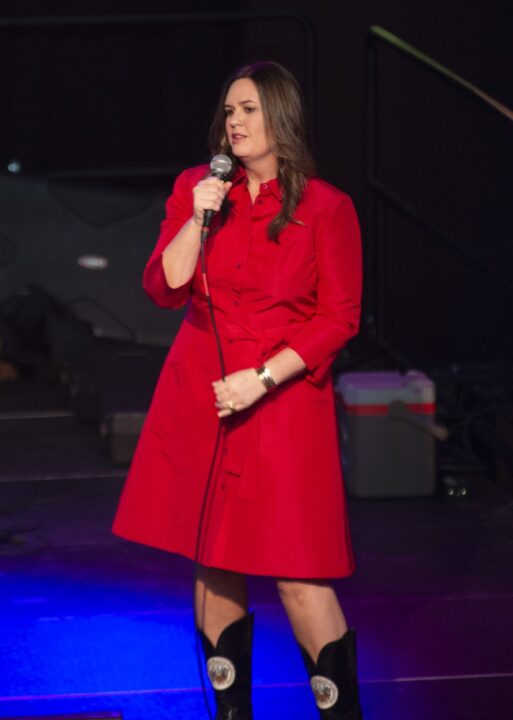 Remember in December when Sanders’ unusual fashion choice at a press conference set off a social media furor over ruffles, traditional gender roles and whether it’s even acceptable to remark on a powerful woman’s fashion choices? There will be no such fallout today, because the entire Sanders family looked on point. Matching red dresses for the governor-elect and her daughter, sweaters knitted with intarsia American flags for the boys. Even the staunchest lefty fashionista can’t claim Sarah Sanders’ boots emblazoned with the state seal aren’t cute.

Her notably short speech landed well, too. Sanders repeated something she says often, that she looks forward to serving as the chief salesperson “to make sure everybody knows Arkansas is the very best state in the entire country.”

Then Sanders introduced the entertainment, Capitol Offense, the band in which her dad, former Gov. Mike Huckabee, plays bass. The name fits, she explained, because all the members “used to work at the Capitol and have offended pretty much everybody. I don’t know how good they are because it’s been a few years since they’ve played, but the price to get them up here was pretty cheap,” she said.

Capitol Offense opened with a cover of Brooks & Dunn’s “Only in America,” followed by Chuck Berry’s “Roll Over Beethoven.” We headed out then, but not before watching another Huckabee family member claim victory as young Huck Sanders leaned forward, grabbed the horns and managed the longest mechanical bull ride of the day.