Sen. Gary Stubblefield (R-Branch) made no secret about religion being the impetus behind SB43, which would prevent drag performances on public property and anywhere within 1,000 feet of schools, parks, churches, child cares, park, playgrounds, libraries, recreational facilities, houses and walking trails. So, basically anywhere not out in the sticks.

“I want to ask you one question before you vote. Would God approve of this?” Stubblefield said. The God to which he refers here is the Old Testament one, full of wrath over men dressing as women and vice versa.

A centuries-old art form dating from Shakespeare’s days, the genre is thought to have earned its name from male actors in women’s roles, unadept at navigating the stage in petticoats and dragging their costumes across the floor. Supported by all 29 Republican senators and opposed by all six Democrats, the bill would classify drag performances as adult-oriented businesses, shackling them with a raft of new zoning considerations and draping them with suggestions of shame and disrepute.

The bill still has to move through the House side before it goes to the governor’s desk.

Once it gets there (as it almost certainly will, considering the Republican supermajority), Sen. Clarke Tucker (D-Little Rock) noted that Gov. Sarah Sanders will face a conundrum.

At Sanders’ inaugural speech before Arkansas lawmakers earlier this month, she pledged that if they sent her “a bill that grows government at the expense of freedom, I will veto it.”

SB43 puts the job of parenting in the hands of the government, legislating what art forms parents can and can’t expose their children to. It does not seek to legislate heterosexual culture, Tucker noted, pointing out that scantily clad waitstaff at Hooters and Twin Peaks are free to strut their wares for underage diners.

The old adage that Republicans are the party of limited government is not panning out at all, Tucker noted. Legislation that targets the LGBTQ+ community is about controlling other people’s lives and decisions, he said. Tucker noted other bills working their way through the Capitol, like one to prevent the state from doing business with contractors who refuse to invest in the oil and firearms industries.

“We’re trying to control the conduct of businesses we disagree with,” he said.

Stubblefield’s assurances that his bill will not hinder plays or even the drag show fundraiser for the fair in his home county is not very solid legal advice. If passed into law, this measure will likely apply to parades and gender-bending plays like “Tootsie,” Tucker said. It even applies to activities that go down in private homes.

“This is a big government bill,” he said.

Arkansas lawmakers continue to throw their energy and votes behind culture war attacks, even as a quarter of the children in Arkansas aren’t sure if they’ll have dinner tonight, Tucker noted. 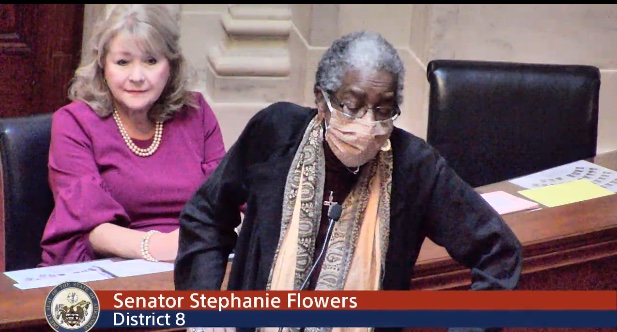 Sen. Stephanie Flowers suggested the anti-drag bill was an attempt by the sponsor to make national headlines.

Democratic Sens. Linda Chesterfield of Little Rock and Stephanie Flowers of Pine Bluff also spoke against the bill, pointing out that Christianity calls for us to love everyone, and that just because something makes you uncomfortable doesn’t mean you should legislate it out of existence.

“This will help no one and hurt a lot of people,” Sen. Greg Leding (D-Fayetteville) said. “Everybody in this room wants to protect kids. This bill doesn’t do that. How many kids do we think in Arkansas are unintentionally seeing drag?”

Leding speculated that number is far smaller than the numbers on children suffering from hunger, violence and mental health challenges. We should probably direct our efforts there, he suggested.

Sen. Tyler Dees (R-Siloam Springs) said he “can walk and chew gum at the same time,” and is capable of taking on education and crime bills alongside the culture stuff.

“We have an issue that is a cultural battleground right now, and our children are at the forefront of that.” Dees said he is in pursuit of “what is pure, what is holy, what is noble,” and that he is drawing a line in the sand.

“Today I’m not going to be silent. You can call me intolerant if you want to,” he said. “If they have pasties on and they’re walking down the street, that’s sexualization. Our children do not need to be sexualized to the other genders.”

Sen. Alan Clark (R-Lonsdale), who got busted for charging the state per diem expenses for a meeting he didn’t actually attend last year but somehow retains status as the self-appointed arbiter of what is righteous and proper, hinted that there will be disorder in the streets unless we codify this latest attack on transgender people.

“There will be howling and protests,” he warned.

The bill now goes to the House side.