Fall in Fayetteville is football, crisp mornings at the farmers’ market and waiting for the maple trees to turn the perfect combination of orange and red. And for the past twenty years, it also means it is time for the Bikes, Blues and BBQ Motorcycle Rally. The event bills itself as a “family friendly” charitable event and lists sponsors such as Progressive Insurance, Sam’s Club, Coca-Cola, Whataburger, the Walton Arts Center, George’s Majestic Lounge and the Fayetteville Chamber of Commerce. There are pie-eating contests, cooking contests, concession stands, and thousands and thousands of motorcycles. Downtown Fayetteville pretty much shuts down for four days to accommodate the festivities. Sounds fun, right?

Yeah, it’s really fun if you don’t mind navigating the sidewalk sale of racist and misogynistic merchandise that accompanies the rally. In addition to ever-present Confederate flag souvenirs and, this year, a gun tent in the Walton Arts Center parking lot, there are vendors on Dickson Street selling swastika and SS patches, along with items that say “This is the USA, We Speak English,” “Virginity Can Be Cured” and other phrases referencing sexual harassment and body parts too demeaning to women to include here. Luckily, the past couple of years, a number of Fayetteville residents have worked to expose what is going on in our entertainment district during this festival. So far, except for some empty promises from the organizers of the event and private parking lot owners, not much seems to have been done in response to these concerns.

Yesterday afternoon, after a number of social media posts about the racist merchandise being sold yet again this year, I went with a friend to check it out. One of the first things we saw, at eye level for young children, was a patch that read “White Power.” A quick look in a sale bin at the same tent turned up two different SS Bolt patches and a red and black swastika patch. As I was photographing them, the vendor came up and grabbed the patches away. He became irate and started filming us as we asked him why he sells racist merchandise. He yelled at us that it was his right because we live in a free country. And he is correct. It is a free country. He and the rest of the vendors have a right to sell their sexist and white supremacist merchandise as long as Dickson Street merchants continue to rent their parking lots for such purposes and the organizers and sponsors refuse to take real and meaningful action to clean up the rally. 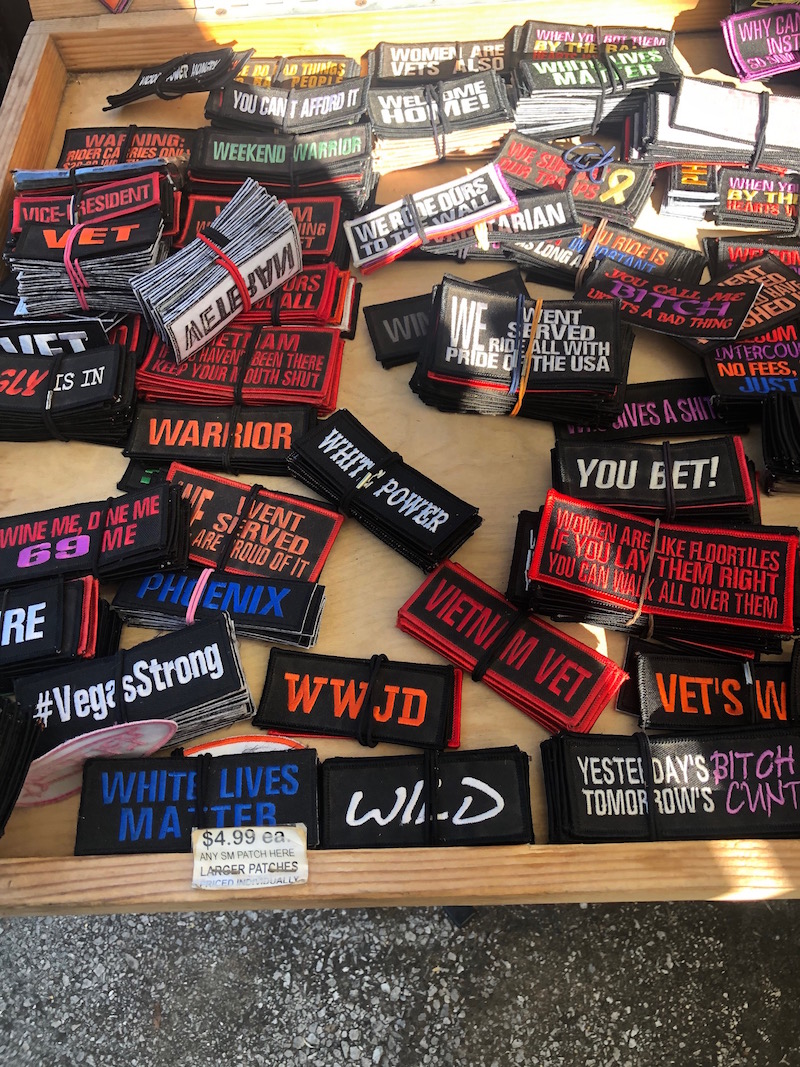 A lot of groups benefit economically from Bikes, Blues and BBQ. Hotels and certain restaurants are full. School and civic groups make money from motorcycle parking. The entire region enjoys increased tax collections. But the rally also comes with significant disruptions. Fayetteville School District closes for a day due to the traffic and noise, leaving many parents to either take off work or pay for childcare. A number of local businesses shut down because their regular customers are unable to navigate the street closures and crowds. The city pays overtime to provide enough police officers to work the rally. However, the talking point seems to be that the money raised for charity and the tax benefits to the region makes the disruptions worth it. But this is not about disruptions. Fayetteville is a busy college town often full of traffic and crowds and noise. This is about how much white supremacy and misogyny the Bikes, Blues and BBQ board members, the event sponsors and the businesses and organizations benefiting financially from the rally are willing to ignore for the sake of money. That’s the question the people of Fayetteville need to ask each and every one of them before next September rolls around.