In France, the concept of terroir is a celebrated one. The word translates literally to “territory,” but means much more. It speaks to the slope of the land, its mineral composition, the currents of air that stir it, and the levels of rain and sun that permeate it. When the word is used, it indicates not only the qualities of a microclimate but also a certain kind of symbiosis with the soil through which those qualities are drawn out and savored. Artisanal finesse — most notably in the field of winemaking — is the means through which a terroir can be tasted.

Winemakers have many variables at their disposal when expressing the terroir of their vineyard: methods of harvesting, maceration (how long the grape juice stays with the skins — a defining factor in the difference between red and white-hued wine), fermentation and filtration, to name a few. A personal cadence develops with the winemaker’s approach to each step in that process, called vinification. When wine is done well, it can capture the singularity of the landscape from which it came. 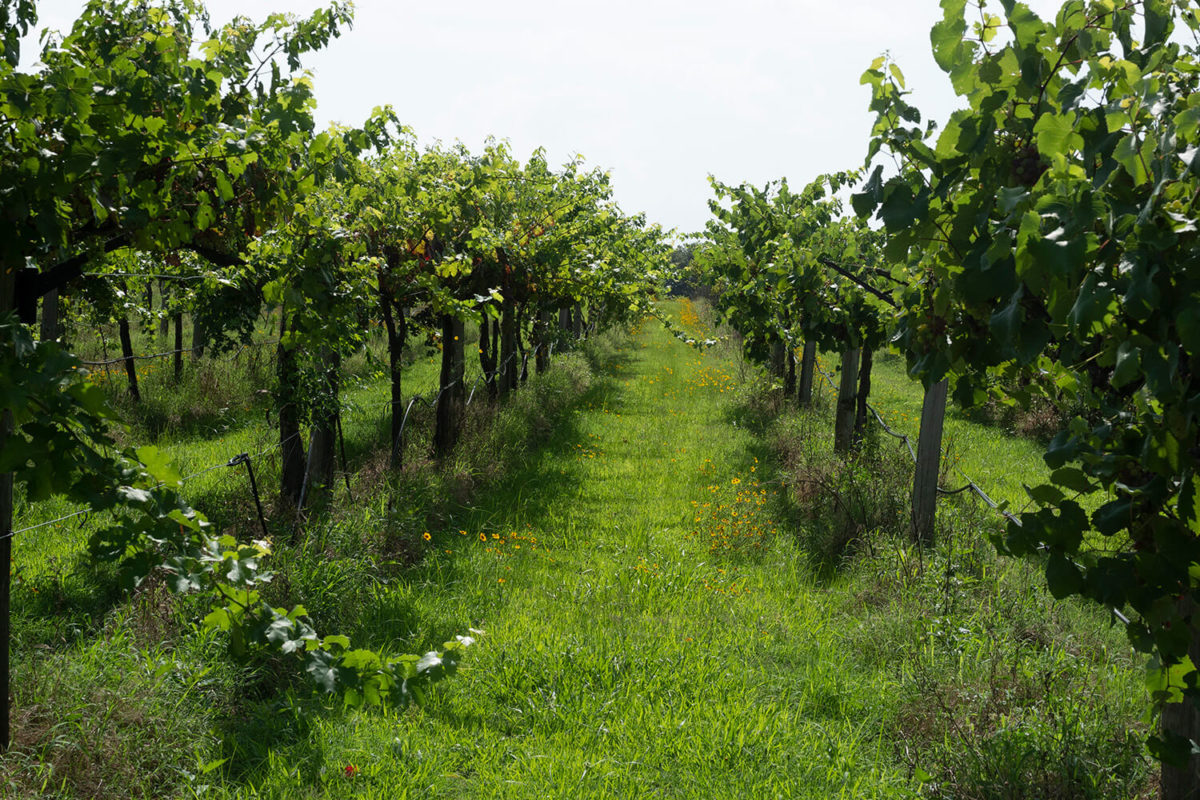 Along the Arkansas River Valley in Altus, there is a wine trail rich in history, rooted in family and eclectic in presentation. A fifth-generation winemaker of Post Familie Winery and vice president of sales, Joseph Post, described his microclimate at the top of St. Mary’s Mountain as one where warm-air reservoirs and a sandy loam plateau nourish over 60 varieties of grapes — Vitis vinifera, the familiar European varietals, and those native to our climate. He explained how viticulture came to be in Altus: “Our family originally came to this country in 1872 by way of Ellis Island and worked their way down into Arkansas with the Benedictine monks of Subiaco. … My great-great-grandfather, Jacob, was a well-educated horticulturist, and he actually helped people select what to grow … wine is what we shined the brightest at.” It was, he said, a melange of Swiss and German savoir faire that catalyzed wine production in Altus.

Standing inside a cabin his ancestors built in 1880 that adjoins his restaurant designed in the “Swiss Alpine” style, Dennis Wiederkehr of Wiederkehr Wine Cellars described the Altus of the late 19th century: “The monks from Subiaco Abbey were writing back home telling people how the railroad had sold land to the Catholic Church,” Wiederkehr said. “The land reminded them of the foothills of the Alps, and the prices were hard to turn down. They were winemakers, millers, farmers, and so they did a lot of the same things when they came here. … There were about 17,000 people in the area back in those days for coal mines. That was a target-rich environment for people from Europe who had wine as a natural part of their diet. The first thing they made wine with here was persimmon; there were muscadines, wild grapes, and other fruits growing in the area that they took advantage of.”

While the National Prohibition Act of 1919 wrought havoc on the local economy of Altus, not to mention the ripening artistry of American wine production, some vintners in Altus saved their vineyards and stayed afloat by making “medicinal,” or fortified wines and sacramental wines for local churches. Katherine Post, whose former home is the current location of Mount Bethel Winery, was one of those resilient winemakers in the area who cleared her own path to survival. She’d landed in Altus as a mail-order bride from Switzerland to marry Tobias Post; once arrived, she chose another brother, Joseph, and they had 13 children. Eugene Post, her great-grandson and current vineyard manager of Mount Bethel, shared the tale of her incarceration during Prohibition, during which she was ostensibly producing “mass wine”: “She eventually got caught. … She pled guilty to selling two jars of moonshine. She told them there was a crop failure and she was just trying to feed her kids. She went to West Virginia to a federal prison, but public sympathy was on her side and she didn’t stay long. In my younger days, I would come across old-timers — not that infrequently — who’d say, ‘Oh yeah, I remember the first time I got drunk,’ and their story was always quite similar: ‘I came in the front door and sat at this big round oak table. She’d bring out this quart jar of wine or moonshine, and she’d usually have a slab of meat and homemade bread, and you could eat a sandwich and drink that jar of wine she’d just brought out.’ It turns out there were secret places under the house, and also in the salesroom there was a fake wall, legend has it. … After the Prohibition, she called her business Ma Post Winery.”

Ma Post Winery became Mount Bethel Winery in 1956, and in its tasting room you can view photographs of Katherine Post while being served wine by her great-granddaughter, Peggy Post, who calls herself “the Homer of Altus.” Mount Bethel specializes in fruit wines — including plum, elderberry, blackberry, blueberry and strawberry — and its elderberry wine is one Peggy Post described as the subject of panacean claims by their customers: “The old-timers all said it’s good for their arthritis because it’s anti-inflammatory; the new-fangled people all say it’s good for your colds and flus because it’s antiviral. I don’t know if any of that is true, but I figure if you drink enough of it you won’t care.” Eugene Post added, “There’s writing about the health benefits of the elderberry in the pyramids.”

A couple of millennia ago, Pliny the Elder wrote “in vino veritas”: “In wine, there is truth,” leading as it does in excess to naked and ungovernable speech. We could also say, “In wine, there is place.” So, what does Altus taste like? To answer that question, we’d have to take a closer look at the grapes that thrive in native soil, such as the Cynthiana, which was officially named the state grape due in large part to the efforts of Audrey House, the proprietor of Chateau Aux Arc Winery, and the muscadine, which is the star of Post Familie’s Blue Parachute wine. “Blue Parachute is something I think we can take national and international,” Joseph Post said. “It’s made out of the native Carlos muscadine grape. It’s one we sweeten with grape juice; it has a little frizzante. There’s no place in the world that muscadines grow better than here.”

Amanda Flemming, the new winemaker at Post Familie, came to Altus from California’s Napa Valley seeking a challenge: “to work outside of the vinifera formulas at the frontier of new hybrids,” specifically the new varieties released by the University of Arkansas — Enchantment and Opportunity. Of Enchantment, Flemming said, “It’s medium-bodied, with bright red fruits; it takes to oak really well. It could be similar to a Cabernet Sauvignon light.” The winery sold out of its 2017 Enchantment vintage. Flemming spoke about the differences between working in Napa Valley and her new home in Altus: “In California, the climate is more conducive … . It’s easier to grow really nice grapes without a lot of input … that’s more of a fine-tuning process. In the South, we have the humidity to contend with. … We need to get our acid blends right. It can be done: The grapes need to be given attention and love.”

Flemming would like to see “grapes like muscadine, Enchantment and more local wines get bigger in the landscape and promoted … in order to change people’s perception of those grapes.” Flemming’s mission is to make “good value, good quality wines. It’s not just those $40 wines coming out of California that are important, it’s the $10 bottle of wines everyone can access.” On the subject of valorizing what Arkansas does best, she said, “For a long time in California, people were trying to be Italy or France. Do your own thing. As communities become more local-centered, I’m hoping that Arkansas does the same.”