In late March, just a few days after President Biden announced the U.S. would be accepting up to 100,000 refugees fleeing Ukraine, Alexa’s Creperie announced on its Facebook page that it would be temporarily closing for a family emergency. Husband and wife Sergiy and Yana Polyakov, owners of the European-style cafe at 238 Cornerstone Blvd. in Hot Springs, got news that they needed to buy a plane ticket for Yana’s mother, a Ukrainian refugee, and head to San Diego to meet her. And they needed to do it right away.

“We talked to immigration lawyer and they said, ‘You need to right now because there are already 70,000 going,’ ” Sergiy said, recalling the experience. “I say ‘OK.’ We drive. Twenty-six hours.”

Yana is from the Poltava region of central Ukraine. Sergiy was born in the city of Donetsk when it was a part of the Soviet Union. Donetsk is located in eastern Ukraine now, but it’s also known as a separatist region referred to as Donetsk People’s Republic.

“It’s honestly two different nationalities of Ukrainian,” he said. “I’m Russian, she’s Ukrainian, but we’re OK. It’s not important what side of Ukraine you are, it’s more important who are you,” he said.

When the Russian invasion of Ukraine began Feb. 24, the Polyakovs worried. Yana’s mother was still there, and so were Yana’s brother, his wife and their child. “It was really difficult,” Sergiy said. Not only is there an eight-hour time difference, but connecting with people in Ukraine was impossible at times because communication towers were down, he said. “I texted and when I don’t receive messages back, I start to worry about what’s happened. I need to wait ’til after midnight. That’s why it’s one month no sleep, stress, I lose 25 pounds,” he said.

Hot Springs residents became aware of the situation and offered to make donations to the family. Gear Factory, a local custom T-shirt company, offered to help Sergiy figure out how to channel the donations and started an online fundraiser.

Yana’s brother’s family is still in Ukraine. “He’s military, he can’t leave,” Sergiy said. “We try to send money, we try to help.”

Yana’s mother, Asiia Kochurova, left Ukraine and traveled through parts of Romania, Hungary and Slovenia before arriving in Poland.

“She take train, she takes car, everywhere I have friends meet her. It’s a horrible time,” Sergiy said. “It was two weeks for this distance.”

A 4,000-plus mile restaurant relocation

Sergiy and Yana opened Alexa’s Creperie in Brussels in 2006, the same year their daughter, Alexandra, was born. In 2012, Sergiy’s sister invited him to her wedding.

“I said, ‘Where are you located?’ She told me Arkansas’s Hot Springs. I go, ‘What are you doing in the middle of the country?’ ”

After attending the wedding and seeing the natural beauty of Hot Springs, Sergiy said he understood why and wondered, why not move to the United States?

“In Brussels, huge city, payment for parking, payment for everything, traffic, you running all day from 6 in the morning to midnight,” he said.

The Polyakovs immigrated to the U.S. in 2014 and brought their restaurant with them, opening on Marian Anderson Road near Lake Hamilton in 2015. In December 2019 they opened a second location on Cornerstone Boulevard. They planned to operate both restaurants, but the pandemic left them no choice but to shut down their original location.

“It was too difficult,” Sergiy said. “Nobody canceled payments for rent. It was a hard time and I really appreciate our customers because they come and buy gift certificates.”

Alexa’s is a small, quaint space with a traditional European atmosphere. Soft piano jazz plays in the background. One of the walls is papered with a mural from a photo a friend sent Sergiy of a beautiful, narrow cobblestone street in France. Tables line the wall, giving the illusion that you’re sitting at an outdoor bistro. The Ukrainian flag hangs above the checkout counter. 3D paper butterflies are affixed to the walls throughout the restaurant and a string flag set of European countries hangs from the ceiling. 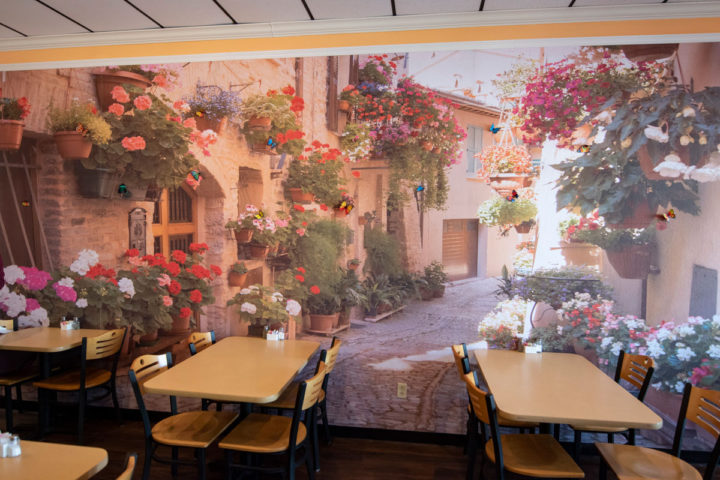 “Every month we have all different types because there’s hundreds of varieties,” Sergiy said. In the winter, Alexa’s offers borscht, a Ukrainian dish made with beetroots.

“We have some customers that really love it and say, ‘I want borscht right now’ and I say, ‘Sorry, it’s summertime.’ When it’s cold we eat borscht with bread, garlic, bacon. We have pierogi varenyky [a dumpling] with cheese in the traditional Ukrainian style.”

Sergiy spends his time in front of the house, running food and checking in with customers, while Yana makes crepes in the back.

The crepes are made on a Krampouz crepe maker, which Sergiy says is the gold standard. Made in France, Krampouz (translation “pancake”) have been used in northwestern France for over 70 years.

“Without those you can’t do it right,” he said.

Customers have asked Sergiy about expanding to a bigger location with more seating. At the moment the restaurant’s staff consists of Sergiy, Yana, a manager/waitress named Jordan who took care of us on both visits, a part-time student, a dishwasher (“he’s really honest and good,” Sergiy says) and their daughter, Alexandra, on the weekends.

“This is our small family business, that’s what we can handle. We can handle this capacity. This is exactly what we need to have,” he said.

On my first visit I tried the Parisian crepe from the savory menu after I heard Jordan tell a table the filling takes three hours to prepare. I was wowed with my first bite by the texture of the crepe, which is like the memory foam version of pillowy food textures, soft and tender but strong enough to hold everything together. Filled with grilled chicken, sauteed mushrooms, roasted red pepper and a delicious spinach cheese filling, it’s topped with a house-made tomato sauce and Parmesan cheese. Wonderful.

On my next visit we decided to try “Alexa’s Favorite” with fresh strawberries, blueberries, house-made whipped cream, powdered sugar and strawberry coulis drizzled over the top. Alexandra knows what she’s doing. I don’t think I can go back to Hot Springs without stopping for this treat.

The texture of the crepe is perfect and the house-made whipped cream was so decadent that I couldn’t stop stuffing my face with it. We also tried the kopytka, a nicely textured dumpling reminiscent of gnocchi that’s made with mashed potatoes, egg and flour. The menu says they are boiled and sauteed for a crispy exterior. They are served by the dozen ($9) and come topped with sauteed garlic, onion, mushrooms and chopped bacon. On the side was a delicious Mediterranean white sauce. It’s not often I go to a restaurant and come out blabbing about textures, but I love it when I do.

Sergiy, a front-of-the-house mind reader, surprised us with some caffeine for the trip home. The “Vienna espresso” came in an espresso glass with a light scoop of whipped cream, a little foam and a dash of cinnamon. He drinks two a day. He also brought us a latte in an Irish coffee glass, which made the layers of steamed milk and foam visible. Topped with a whipped cream and a drizzle of chocolate, we were alert and awake for the trip home.

Kochurova flew from Poland to Cancun to Tijuana to San Diego. Sergiy said it wouldn’t have been possible without help from Hot Springs residents. The first few weeks, people offered to help, but Sergiy didn’t know what was needed.

“After we realized she needed to make this trip through Europe and take a flight, we realized we need to collect money because it’s a huge amount. We cannot afford this, honestly. If Hot Springs and people don’t help, we cannot save her life,” he said. “I have a lot of customers text me, go on Facebook, ‘Are you OK. You need help?’ This means a lot to know you’re a part of this community. I love Hot Springs, I love all my Arkansas and foreign customers.”

Kochurova was able to enter the U.S. on humanitarian parole status, allowing her to stay for one year.

“You can apply for Social Security number, work permits, which we’re working on right now,” Sergiy said. Is she planning on working at Alexa’s Creperie?

“Yeah, because she loves it,” he said. “She’s cooked all her life. She teach my wife.”

Sergiy said it’s difficult to understand what she’s been through, having to flee her war-torn homeland. “It’s a difficult time for her, but we give her all our love and we are happy to see her. Finally my girls smile, and I can work and spread my smile and love to people.”