Whether you’re starting 2021 with a Dryuary or toasting the New Year until the fetid smell of 2020 has worn off, January’s become a time to get thoughtful about alcohol — what we love, what we hate and what role it plays in our newly pandemic-stricken social lives. It’s also the month when, in 1919, Arkansas ratified the Eighteenth Amendment, establishing prohibition in the state and ushering in a formalized relationship between booze and government. So, in January 2021, the Arkansas Times raises a glass to all things boozy with a series we’re calling Drink/Drank/Drunk: our city’s great cocktails and mocktails, the history of temperance in the state, brews to try before you die, a boozy playlist and more.

The town of Norfork sits at the confluence of the North Fork and White rivers, just south of Mountain Home in Baxter County. It is, as a local fly shop tells it, one of an angler’s best bets in the region for catching a “slam,” a specimen from each of four types of trout we have here in Arkansas — rainbow, brown, brook and cutthroat. It’s also now home to Norfork Brewing Co., founded in 2018 by Jason Aamodt, a Tulsa-based lawyer from New York state who specializes in Native American and energy law. You could say Aamodt dabbles in brewing beer as a side venture, but it’s pretty evident after talking with him for a few minutes that “dabbling”’ isn’t accurate; Aamodt’s degrees in biology and chemistry mean he’s the sort of person who can rattle off the average attenuation rate of a particular yeast strain and use the word “saccharomyces” in a sentence.

“I’m so tired of beers that are trying to do a double backflip before they get into your glass,” he said. “The criticism I’ve had of craft beer for a while is that we’re all just trying to outdo ourselves, and we’ve forgotten that what we really need to do is just make really good beer.”

Norfork Brewing, he says, does “some crazy things, too. We throw in elderberries or mulberries. We do a sumac-based beer. But we really just wanna make a good beer that tastes like beer. Doesn’t beer taste good? Isn’t that sort of the idea?”

After trying an at-home “flight” of all four Norfork Brewery cans on the shelves at Colonial Wine & Spirits — the smooth Black Oak Stout, the funky Woodsman Pilsner, the easygoing EZ Ryder Lager and the citrusy Scurvy Dog Ale — I talked with Aamodt over the phone about brewing, business and how a member of Southern rock outfit Black Oak Arkansas ended up as the stout’s namesake and ambassador. 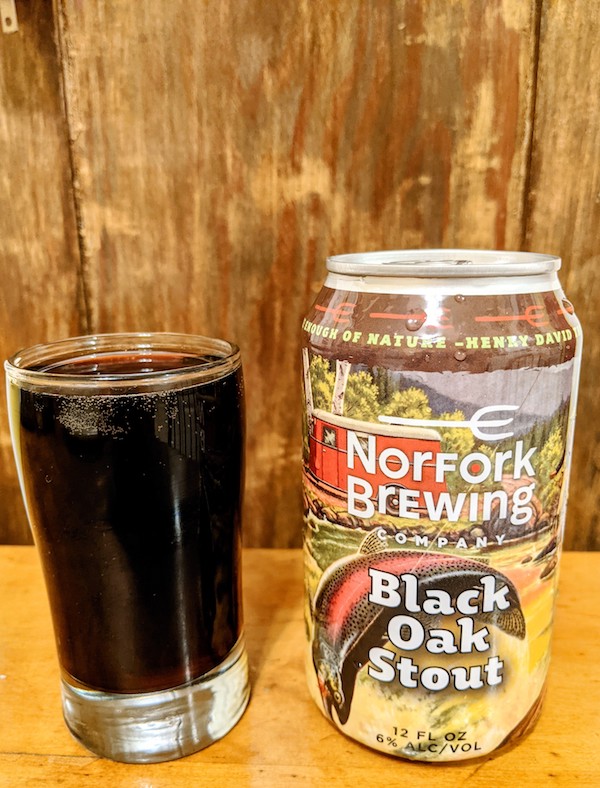 I love the Black Oak stout. It’s not, like, a high-commitment stout. You could drink it with a burger or a salad, and it doesn’t intrude. I will say I was caught a little off-guard by the pilsner. Was not expecting that.

Yeah, it’s not what you expect to come out of a pilsner can, right?

No! I feel like I was more prepared when I poured it into a glass and saw the color, but still.

You know, there are these old rustic pilsners in Germany and Czechoslovakia, like from farmhouses, really rustic. So that’s what we were trying to connote, the idea of it being the Woodsman’s Pilsner — a throwback to what pilsners used to be.

And you incorporated the pawpaw in the pilsner, right? From the White River?

Yeah, I worked with a guy named JR Kent, down in Mississippi. He’s actually started up a cidery and taproom, but he’s a microbiologist, and he and I met at the Southern Brewers Conference several years ago. He’s really interested in yeast that can be collected from wild fruits and used to brew. So we were sitting there having a beer in the tent one day and I said, “Have you ever heard of pawpaws?” And he says “No, what are they?” And I said, “Well, they’ve got ’em all along the rivers out there.” They’re basically Ozark bananas. They’re fantastic. Also known as custard apples; they taste like a custardy version of a mix between mangoes and bananas, depending on the variety you get — if you can get to them before the squirrels do. So under his direction, I harvested some of these pawpaw fruits and then, in a sterile way, set them out next to the Norfork River one night for a few hours to let them collect the yeast that are endemic to the river system, and they did just that. When he then took the samples that I sent him, he found nine different genetic strains of saccharomyces, which is the ale brewing yeast. He then took three of those that he thought appeared to be the strongest, sent them to me, and then I brewed a few different beers with each of them, and then kind of settled on one that had a very high attenuation rate — over 80 percent. It was very quick, a really great yeast. And that’s our pawpaw yeast. But it’s also why, when you taste that pilsner beer, it’s like, “Oh, this is kind of saison-y, Belgian-y, funky because it’s truly a wild yeast, and that’s what you get. 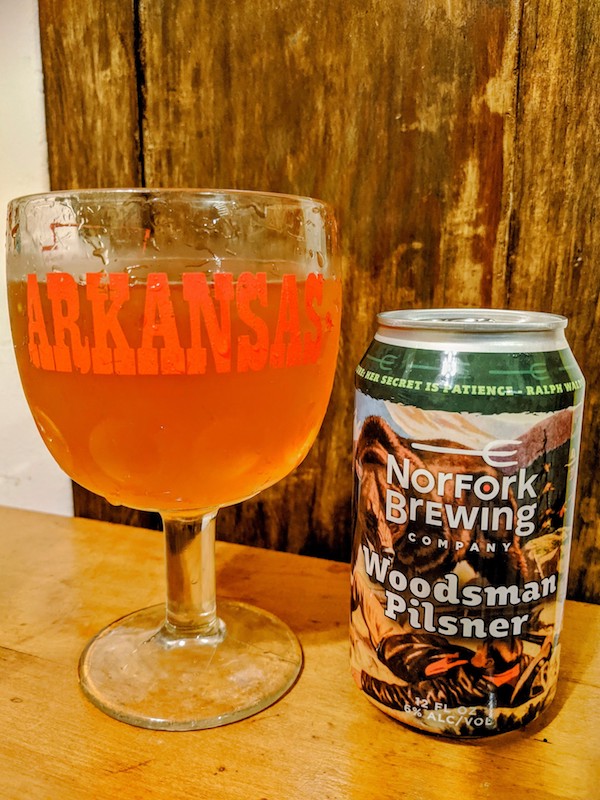 So how does a Tulsa-based attorney end up working with a microbiologist in Mississippi to cultivate yeast for a craft brewery in rural Arkansas?

Lack of good sense, I figure. So what happened was, as a young lawyer I was working at a very large Houston-based law firm. My office was in Tulsa, and one of our contractors invited us all to go to the White River. Two of us took them up on it. I grew up in the Northeast, and had been trout fishing since I was, literally, 5 years old. And I saw this river, and thought, “Wow. This exists? Here? No way.” So I literally kept the trunk of my car packed with a tent and a cooler, and I would go over to a place called McClellan’s and go fishing at least once a month. That was in 2000, and then in 2009 I bought a house over there, and then in 2015 I bought this building that the brewery’s in. It was totally blown out. I wanted to buy the boat that was for sale at this auction, but somehow I missed and bought the building.

Yeah. And the windows were gone. The roof had holes in it. It was a total mess. So I put it back together and my nephew and I were hunting one fall — Ben Folta’s his name, he’s a classically trained chef — and he said, “You know, I’m really tired of being a chef. I’d kinda like to do something else. And I was, like, “You know, I’ve been kinda thinking it might be pretty fun to put a brewery over here.” I’d been brewing beer for years, and you know, we just got crazy enough to do it.

Then last year, right before the pandemic started, my best friend from college, Mitch Krauss, called me up and said, “You know, you need me to run your brewery.” I said, “Mitch, you’re right. I do. But I can’t afford you.” And he said, “Well, you know, I need a change of scenery.” At the time, he was the sustainability director for Burton Snowboards in Vermont. Pretty sophisticated and decorated guy. He was the chairman of the sustainability committee of the [National Outdoor Apparel Manufacturers Association.] He’d spoken all over the world for the U.N. about sustainability, and is a chemist. And his big complaint was that the places he liked to hike in the Northeast had become totally overrun. We both grew up hiking in the Adirondacks and used to be you could go up there and hike a trail and you wouldn’t see anybody. Now it’s like Manhattan in the woods.

And your nephew is doing most of the brewing?

Yes, and we hired another guy, Joe Dobson, who does most of the canning and packaging. 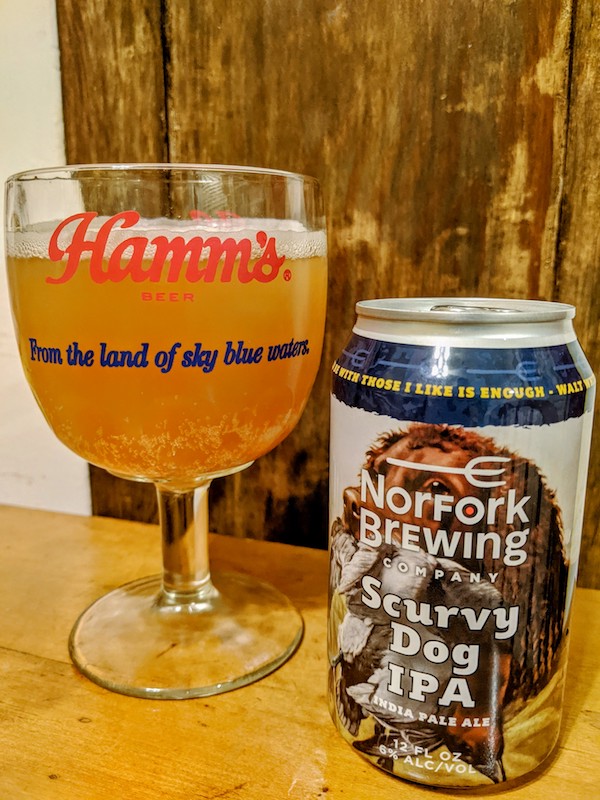 Was the canning something you were thinking of doing anyway? Or was it accelerated by the pandemic?

Yes and yes. So, I’d been kind of slowly surfing auctions and other sale places and picking up equipment essentially at what would be a very good price, or was just really good equipment. … For about a year or so, knowing that I was going to want to expand sometime, I’d take a little cash and put it aside, get a great deal or find exactly what I was looking for. And I did the same thing with the canning line. Like, “OK, I’ll just stick this aside ’til we’re ready.” And then we came into the pandemic last spring, and I said, “Guys, it’s time to brew some beer we can put in cans. What do you want to do about that?” So that’s what we did. We took the equipment and brought it online, and we started by self-distributing in our local area, and a little bit down your way. So we’re really just starting out.

The press release I got says you use water from an Ozark limestone aquifer. That’s in Norfork?

We have a well that we draw from that’s alluvial to the White River. But we do something unique with our water — we strip it all with a reverse osmosis membrane, and then for each style of beer that we make, we adjust the chemistry of that water using things like gypsum and epsom salts and calcium chloride and calcium carbonate and other things to create a water chemistry profile that is particular to the kind of beer that we’re making. Like, our lager is like what you might consider a pilsner to be like — it’s very light, very clear. When you pop that open, you kinda think, “Oh, this should have been in the pilsner can.”

I kinda did think that.

Right. So that has a very light water profile — very little calcium, very little hardness. Low alkalinity. But on the other hand, with the stout, we make this really hard water chemistry using a lot of calcium chloride and a lot of calcium carbonate to make a water that’s similar to what you’d find in Dublin. What I’m proud about with our beers is that they don’t taste anything like each other.

Right. That’s very true of the four I had.

There’s no kind of unifying flavor between the four of them. With some breweries, you’ll pick up a beer and go, “Oh, they all kinda taste the same.” One of the reasons we’re able to do that is because we’re really careful about having a different water chemistry for each beer. 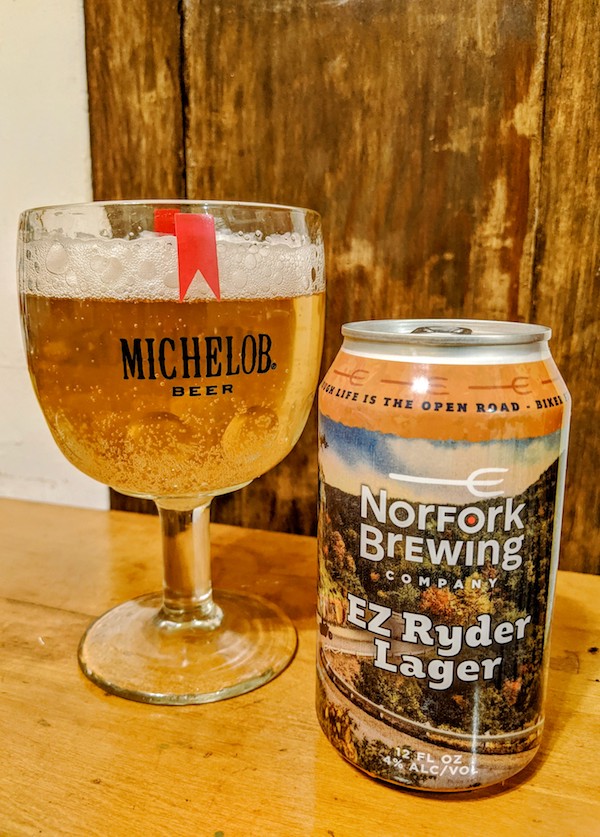 The release also says you named your stout after the band Black Oak Arkansas?

Yeah! So Andy Tanas is the former bassist for Black Oak Arkansas, and for a heavy metal band called Krokus. And one day he kinda wanders into the brewery and says, “Hey, uh, would you like me to play some music?” And we had no idea who he was, and we were like, “Sure! Why not? Go ahead. How much do you want?” And he starts playing, and he’s incredible. … So we got to be friends with Andy — not because he’s famous, but because he’s a really cool guy — and so as we were thinking about packaging names, we thought, “Well, we need to honor Andy and honor the band.”