Chef Payne Harding who, along with his father, Rush, owns Cache Restaurant at 425 President Clinton Avenue in the River Market district, was selected to compete in the online chef competition Favorite Chef. How Harding ended up in the competition is a bit of a mystery, he said, because he never applied.

Harding noticed in an email that he’d been selected for the contest shortly after going through two casting rounds for the Food Network’s Guy Fieri show “Guy’s Grocery Games.” Due to the timing, he thinks he was hand-selected by an L.A. casting director he’d been in contact with.

The way the contest works: home chefs, restaurant chefs and private chefs can enter online and provide pictures and a bio. The contest is driven by daily online voting. Voters log in through Facebook and can vote for their favorite chef once a day. There’s also a “Hero Vote” in which voters pledge a minimum of $10 ($1 equals one vote), with a portion of the proceeds donated to Feeding America, a hunger relief organization.

According to the Favorite Chef website, the grand prize winner will receive $50,000 and a two-page spread in Bon Appetit magazine.

Some concerns about the legitimacy of the contest have recently surfaced.

Harding, 33, said he knew he wanted to be a chef in junior high school. His first restaurant job was at the age of 15 at the once popular fine dining restaurant 1620, which was located in the space now occupied by Petit & Keet at 1620 Market St. in West Little Rock.

Harding graduated from the Culinary Institute of America in Hyde Park, New York. After graduation and an externship at the now shuttered Le Cirque in Manhattan for seven months, he returned to Little Rock and helped rebrand 1620 to 1620 Savoy. Soon after, his family opened Cache Restaurant in the northeast corner of the Arcade Building in the River Market district.

The restaurants in the River Market district faced tough challenges during the pandemic because of the lack of tourism downtown, along with so many people working from home. Harding said the energy and momentum in the River Market district is starting to pick back up. “We’ve actually been moderately busy. It’s exciting when we are busy on Friday and Saturday nights, and occasionally we’ll get some socially distanced parties upstairs for a wedding or something like that,” he said.

Harding said one positive aspect of the pandemic for restaurants is that it has helped open up the levels of communication among staff about safety measures, which in turn improves the customer experience.

“It definitely improves customer satisfaction because you’re looking at all facets now that you probably weren’t looking at before regarding sanitation measures and making sure the tables are 6 feet apart and chairs not being too close together. And I feel it’s even cleaner cooking with a face mask. I think that’s a positive way to spin it is that it’s just a really nice, safe experience for the customer.” 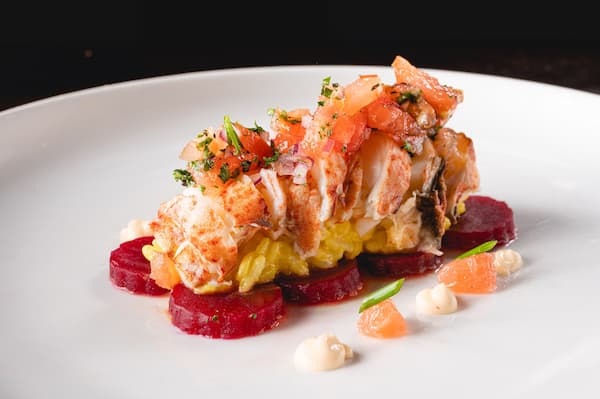 I asked Harding how the pandemic changed his relationship with food and cooking.

“When the pandemic first hit, I bought a 10-pound bag of flour because I knew bread was going to be something that I was going to want and that there would be a shortage of at the grocery store. So I did start learning to bake with precise measurements. I baked my own pizza dough, I did some brioche, a focaccia — those are the three breads that I worked on. I thought it was kind of fun to bake because we were locked down. We were all kind of scared in the beginning, and we weren’t leaving the house, so there were a couple months where I was just baking like crazy, eating a lot. I gained a lot of weight, but I enjoyed the baking aspect.”

Harding said putting dishes together and working with new ingredients are among his favorite things about being a chef. 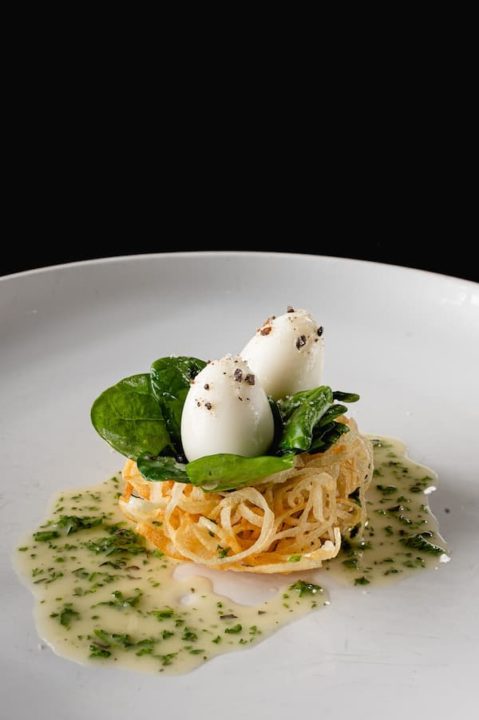 Eggs in a nest with truffle and spinach

“I enjoy researching and developing dishes, menu writing and seeing it all come together and unfold over the course of a couple months. Conceptualizing the dishes and then training the sous chefs and cooks on how to put the dishes together and watching them master the dish and watching the dish go out in the restaurant how you envisioned it with other people executing it. There’s a sense of accomplishment with that, knowing that you can train another person to execute your own vision. I think there’s a sense of pride that comes with it when you’re a chef.”

You can vote for Harding daily in the Favorite Chef competition here.