Kreg Stewart had no intention of baking pizzas last August when he rented a space in Arkitchen — a 5,000 square foot shared commercial kitchen space offering caterers, bakers and food truck owners an incubator to develop their food businesses.

Stewart’s goal was to start a meal prep company, but his plans changed suddenly over his birthday weekend after his friend Harlem Wilson, a homemade pizza hobbyist, made him a pizza.

Stewart thought about Wilson’s pizza the rest of the weekend. He talked to his wife about it.

The decision was easy, Stewart said. A meal prep business would have fluctuating food costs, because different varieties of weekly meals would call for a rotating ingredient list. With pizza, though, he’d have a steady list of ingredients (salt, yeast, flour, pizza toppings) and relatively low food costs.

Stewart didn’t waste any time. He approached Wilson the following Monday and they came up with the name Certified Pies, and dreamed up a menu that pays homage to the music they enjoy: The “Al Green, the “Remix,” the “Mixtape,” or the “Smooth Operator.”

Starting out “was very interesting,” Stewart said. “We had no clue about making dough in bigger batches versus making it at home.”

They did a lot of research on YouTube and spent a couple months working on recipes. They opened up the first week of October, becoming the first ghost kitchen pizza concept in Arkitchen and the only Black-owned pizza business in Little Rock. “We’re striving to be not only the first Black-owned pizza company in Little Rock, but one of the best,” Stewart said. “We’ve been doing it ever since through trial and error and just pushing through. It’s been so much fun building it.”

Stewart said a lot of people asked him why he was opening a new business in the middle of a pandemic.

“I honestly just stepped out on faith and belief,” he said. “Something just told me this is what I’m supposed to be doing, and when I believe in something, I always go beyond overboard.”

Stewart and Wilson are both from Southwest Little Rock. They’ve been friends since attending Cloverdale Middle School together. “We were friends, best friends, before we started this company, and it’s been an easy transition into being business partners together and building this company the way we want it to be built. We’re brothers, so he can tell me certain things in certain ways other people can’t, if that makes sense. He can come to me and say, ‘you’re messing up, you’re not doing right.’ I can do the same thing for him, and we just understand, it’s a team effort, nobody takes it to heart — it’s all about just growing and building and working together.”

Since they opened Certified, they’ve not only been serving people from Little Rock but also Jonesboro, Pine Bluff and White Hall, Stewart said.

“People came from El Dorado this weekend and were like, ‘We came just for y’all.’ It’s just amazing to witness and be a part of everything that’s going on right now,” Stewart said.

Because they’re working out of the Arkitchen space, they can only offer curbside pickup and delivery, which they do through third party apps Bite Squad and DoorDash. In addition to being the executive chef and recipe guru in charge of making dough and scratch-made sauces, Wilson also works full time at the Dee Brown Library in Southwest Little Rock. Certified’s fry cook, Mark Nelson, also has a full time job, as does Stewart’s wife and co-owner, Samantha Stewart, who also serves as Certified’s front of house manager. To make all of it work, Certified is only open a few days a week.

Certified Pies is located at 9813 W. Markham St. in the shopping center that houses Fuller & Sons Hardware and Andy’s Restaurant. For pick up orders, you pull around the back of the building and park in one of the designated curbside spots.

A customer waiting on an order talked to us through the window of his vehicle and was excited to try Certified because he’d heard so much about it. One of the things we’ve been hearing about are the Certified Truth Wings — wings that are fried and tossed with Truth Sauce, a sweet heat sauce made locally by Little Rock native Keith Tucker Jr. The sauce is new to the condiment scene; it’s been around for about a year and half but is now sold locally in 30-plus stores. Certified sells it by the bottle. It’s a fantastic wing sauce, and I found myself wanting to describe the wings after each bite. “Oh wow. Good texture, just slightly breaded…great balance of sweet and heat …”

I admitted to Stewart that I’d shamefully opened the fridge that night at 11 p.m. and ate a Truth Wing cold out of the refrigerator. (It was remarkable).

“Man, you aren’t the first person to tell me that,” he said. “I had a guy text me at like two o’clock in the morning and was like “Kreg, I’m eating them cold and they are fire, man …’ I was like, ‘Man, go to bed. Why are you texting me about wings right now?’ ”

The pizza crust at Certified is thin but not like a crispy cracker. It has a nice, soft texture and has a subtle buttery garlic flavor. Certified’s most popular pie is the “Boss Hog,” made with house tomato sauce, a five cheese blend, pepperoni, sausage, beef and bacon. The “Smooth Operator” features a house-made ranch sauce base, a five cheese blend, chicken and bacon crumble.

The “Al Green,” has an Alfredo base with a five cheese blend, chicken, spinach and tomato. You can also build your own pies.

Other appetizers such as breadsticks and cheese bread are available and calzones with up to two toppings. There are also three salads: a chef, a crispy chicken and a garden.

Stewart said the goal is for Certified to eventually have its own brick and mortar location.

“We are maxing out the space in ArKitchen. Literally, we can’t handle anymore than what we’re doing right now. It’s tough because we want to do more,” he said. “It’s hard when you’re sharing a space with 25 other businesses. … But we want to keep this going so we can have our own space and people can come dine in, and I can actually meet the people that have been buying our food instead of just being in the kitchen all the time. It’s a tough situation to be in right now, but we’re pushing through.”

Certified has certainly created a buzz in a short amount of time. The first time I tried to order from there was a Saturday around 5 p.m. and they were already sold out for the day. The next week, I called earlier around 2 p.m. and basically reserved an order for later that evening.

Stewart said that people often ask him who does their marketing.

“It’s just me,” he said, laughing. “I’ve been bringing the city along with me as far as building. I don’t hide anything.”

Stewart said that sometimes people tell him that he’s too transparent.

“I’m very transparent when it comes to Certified Pies because I want people to see us from where we are now to where we’re going to be. It’s important. I feel like if they see where we’re coming from, and they feel like they’re a part of the journey, then they’ll take pride in it just as much as I do.” 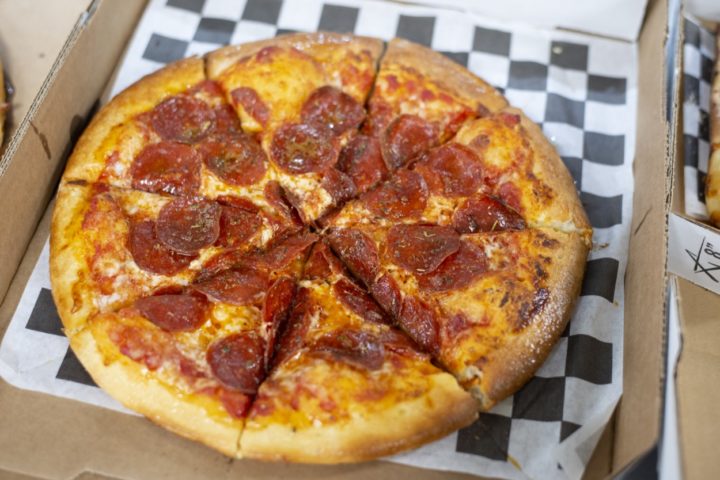