In one very famous scene in the episode of the old British television series “The Avengers” titled “Dial a Deadly Murder” our hero John Steed is challenged to exhibit his knowledge of wine in the dusty cellar of a connoisseur. Given a glass and told to identify said vintage, he sniffs and tastes and mulls a bit, finally identifying it as a Chateau Lafitte Rothschild and then going on to cogitate: “Definitely pre-1914 … but no earlier than 1880.” Finally, with a slight flourish, he gets more exact, identifying it as a “1909, from the northern end of the vineyard,” an act of accuracy that causes his challenger’s monocle to fall from his eye.

My friend Mark is a bit like John Steed in that episode, but he’s a sommelier of hamburgers. Take him to some new burger joint, and with the first bite, his eyes will assume a steely concentration as he moves bits of beef across his palate, until finally, after a few minutes of meditation, he starts to tell you exactly what kind of grill was used — and, most importantly, how old said grill is. You won’t find him down in a dank cellar, for his talents are the exclusive reserve of greasy spoons the whole state over.

So, as you can imagine, Mark went into mourning some years back when the renowned Monkey Burger in College Station went belly up. But while the Little Rock restaurant scene does not usually reward one’s faith in the Resurrection, in this particular case, Mark and many of the other devotees found their prayers answered, for the old Monkey Burger site has been taken over by J. Paul’s Express, and they are dishing up a little something called a Gorilla Burger.

We’ll circle back around to that burger momentarily, for J. Paul’s Express probably does a better business with its daily quick lunch specials of the “meat and two veg” variety, for either dine in or to go. It’s the sort of place that starts filling up quickly around the noon hour, a devoted constituency being guys in yellow reflective vests taking a respite from some construction site somewhere in town. On one visit, those daily specials consisted of either a slab of grilled salmon or a deep-fried pork chop, accompanied by one’s choice of vegetable medley, rice, green beans or corn. I went for that pork chop, while another friend went for the salmon, and neither of us had cause for regret. My chop was thick and nicely breaded and drizzled with a brown gravy that actually carried the flavor of the meat rather than covering it up, while the sides did their job adding a bit of greenery or grain to make it a more balanced meal. It was enough to fill one up without impeding your higher cognitive functions for the rest of the day. 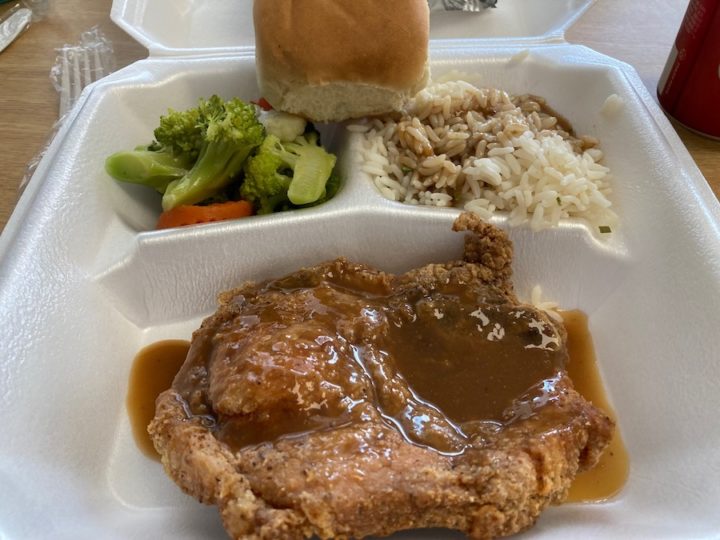 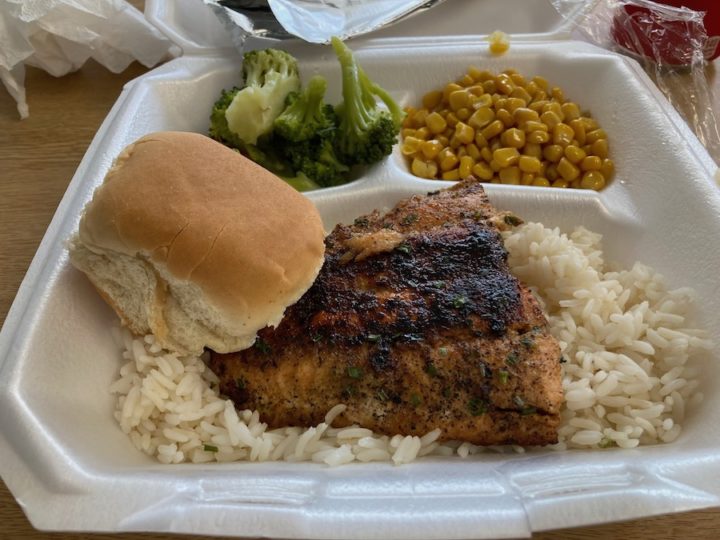 The Gorilla Burger, however, is a whole other story. If you were a fan of the old Monkey Burger, you’re in luck, for it’s the same exact thing: three beef patties, two bacon strips, cheese, a fried egg and two onion rings, all between a hamburger bun.

Fortunately, one can order said burger with only one or two patties, which is the route I took that day. Even with only two patties, though, this burger left me feeling my years, well aware of the fact that my metabolism, once legendary, now will feel the shocks to which I occasionally still subject it. Perhaps this is what Shakespeare meant when he wrote that “a man loves the meat / in his youth that he cannot endure in his age.” 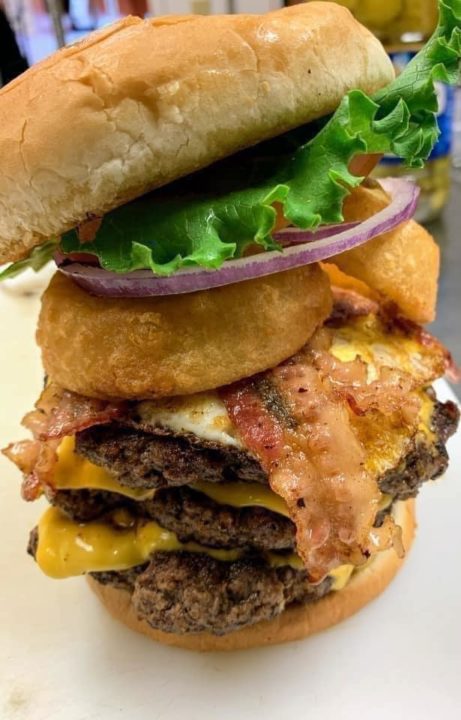 Oh, but we do still love it, even if our endurance is in decline. And this is a burger to adore, an exquisite assemblage of ingredients that culminates not just in increased mass but also a balance of textures. The Gorilla Burger is one of the true great burgers of Little Rock, and I ate it all up, to hell with the long-term effects upon my midriff. The fries were so good that I finished them off, too, even after my other feat of endurance. (As an aside, I am pleased that J. Paul constitutes one of the few places in this city that does not automatically offer ketchup but has on hand any number of different sauces, including hot sauce, which I do prefer for my fries.)

While J. Paul’s exists not to offer up a “foodie” experience of exotic dishes or a farm-to-table ethos, but rather to feed hungry folks on their lunch break, it simply cannot avoid the touch of transcendence. “I don’t believe in hell,” my friend Mark said with his first bite, “but I do believe in heaven again.” Did I see tears in his eyes as he slowly chewed on his last mouthful? Probably. But whether it was from joy or from both of us simply having eaten far too much, I simply could not say. 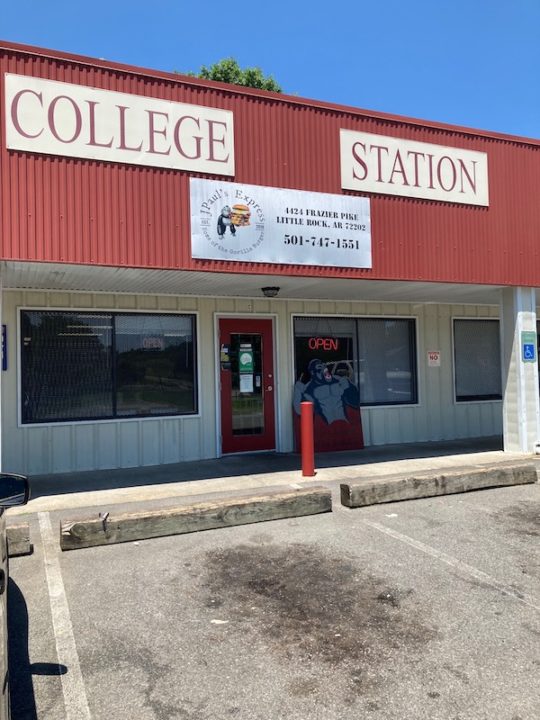