I’m paid to write about food and restaurant news. So you can imagine the humiliation I felt when it was reported in March, both nationally and by Max Brantley at Arkansas Times, that celebrity couple Aaron Rodgers (Green Bay Packers quarterback, “Jeopardy” guest host) and Shailene Woodley (“Big Little Lies” actress, environmental activist) enjoyed a nice breakfast at Best Cafe and Bar in Hot Springs, a brunch spot I didn’t know existed. I think of my failures in terms of headlines now: “Hot new celebrity couple comes to town and informs local food writer on where to eat.”

Turns out Rodgers and Woodley were at the vanguard of Best Cafe fandom. The restaurant had just opened when they visited. As usual I’m six months behind. Best Cafe is part of Best Court, a motor court that opened in 1933 and was revitalized in 2017. The corner suite, No. 11, where Rodgers and Woodley stayed, once hosted Marilyn Monroe and Joe DiMaggio, according to hotel lore. 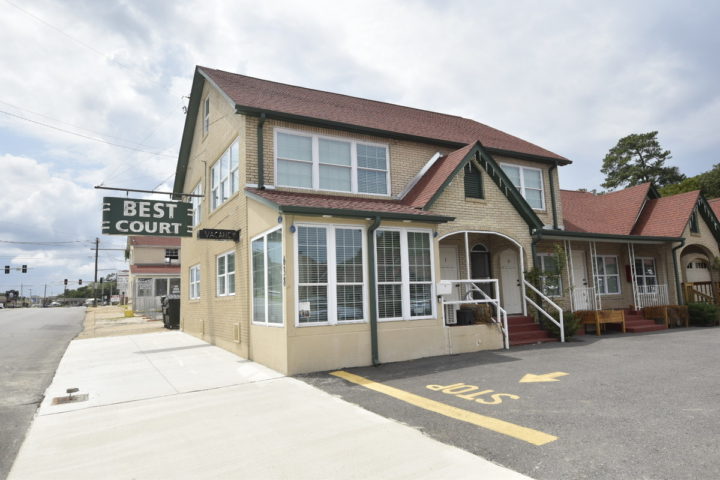 Rick Williams and Mark and Rhonda McMurry co-own the hotel and cafe. The McMurrys oversee the cafe and recently restored the historic W.C. Brown House mansion at 2330 Central Ave. and turned it into The Reserve at Hot Springs, a luxury boutique hotel. They brought in chef Joshua Garland to be the executive chef there and at Best Cafe. A Little Rock native, Garland attended culinary school in Las Vegas after graduating from high school at Arkansas Baptist (now Baptist Preparatory School).

“I’ve been traveling pretty much for the last 10 years,” Garland said. After cooking stints in Alaska, Idaho, Singapore and Martha’s Vineyard, Garland spent the last two years in Florida, most recently working at Windsor Country Club in Vero Beach.

The McMurrys knew Garland because he went to high school with their son.

“That’s where the connection came,” Garland said. “They knew I was a chef, and they flew me out and did a tasting and that was pretty much it. I decided to come home.”

Best Cafe opened on March 1, and despite the celebrity plug and the mouthwatering, chic food pictures on its social media pages, it still feels like a hidden gem.

We visited on a recent Saturday morning expecting a long wait. The restaurant is small and quaint; in fact it looks like a cottage itself from the outside. The mid-century interior — black and white checkered flooring, cream-colored walls and retro chairs — pairs nicely with the old photographs of the motor court. The cozy bar area charms with a white bar top, quilted maroon leather on the underside and green high-back bar stools. As inviting as the inside was, we were determined to sit on the adjacent patio because we’re avoiding indoor dining right now due to the delta variant. To our surprise we only had to wait about 15 minutes for an outdoor table. Shade from large umbrellas meant that the heat wasn’t too unbearable. My dining companion ordered a delightful “Cheek to Cheek” mimosa ($9) with St. Germain, prosecco and orange juice. Other mimosa flavor options: blood orange, pink guava, pomegranate hibiscus or green apple. Flights are available for any combination of four for $16. 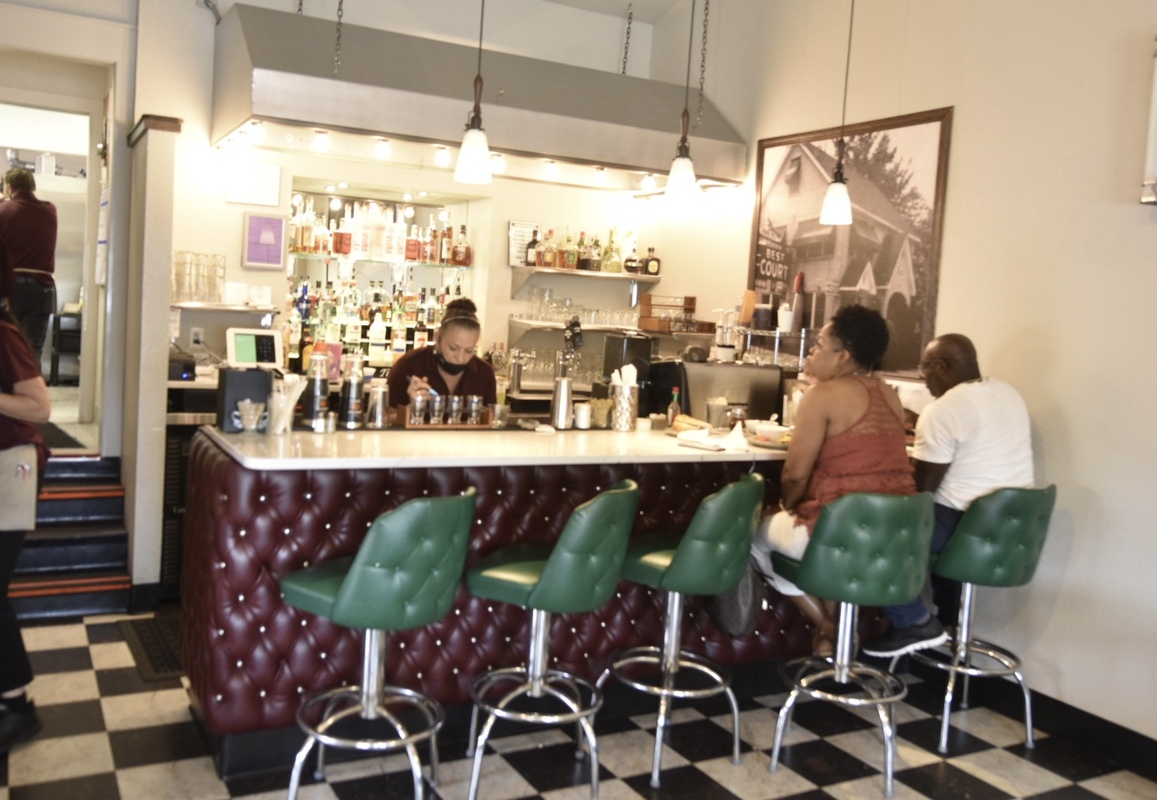 I made the mistake of ordering a cup of hot, black coffee despite the 90 degree-plus temperatures. I was recently inspired by something my editor said about an ideal decadent weekend breakfast needing to be paired with “strong, black coffee.” Our server had every reason to question what I was thinking, drinking piping hot coffee outside on a brutal summer day (slightly hungover, even). But I did not make a mistake ordering the Creme Brulee French Toast ($13). 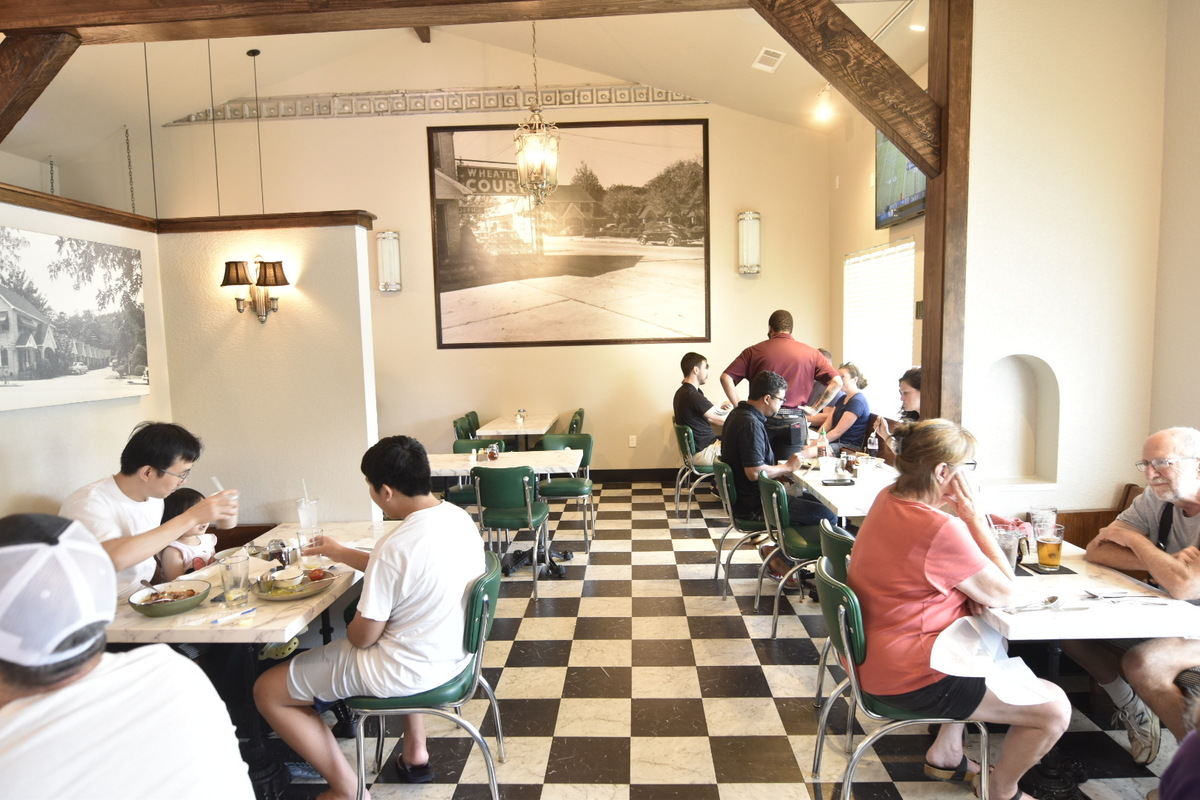 The single slice of French toast occupied almost the entire circumference of the dinner plate. My response after the server set the dish down: “Oh, wow.” I’m sure there have been many similar reactions. It was the biggest slice of French toast I’d ever seen, served with a generous scoop of salted molasses butter on top along with macerated berries and granulated sugar. The texture was amazing, soft inside with a nice crunch on the outside from the bruleed sugar. The berries provided a refreshingly sweet finish.

The brioche bread is made in-house. “We make it large,” he said. “It’s not your typical bread loaf.” It’s soaked in creme brulee batter for five to 10 minutes then grilled on both sides. Raw sugar is sprinkled over the top and then it’s bruleed with a torch.

My companion ordered the Best Cafe Eggs Benny ($14) served with breakfast potatoes and a grilled tomato. The generous portion of shaved smoked ham atop the grilled English muffin was delicious and the hollandaise and poached eggs were just right.

I visited again recently to try the burger on the lunch menu because I wanted to know what a $21 burger in Arkansas tasted like. Once again, the presentation was impressive. Served on an oblong platter with house-made chips, the burger looked ready to be shot for an ad. The brioche bun was house-made and topped with a half-pound burger with bacon, a roasted poblano pepper, smoky tomato jam and a thick slice of pepper jack cheese with a pickle toothpick-speared to the top of the bun. It wasn’t a traditional burger, but the flavors fused together palatably. Would I enjoy the same burger more if it were instead topped with American cheese, tomato, lettuce, onion and mayonnaise? Maybe. But it was impressively put together and large enough for two servings. Garland said when the restaurant first opened it received some flak about the price of the burger from locals and Facebook foodie pages, but that as people have come in and tried the burger, “it was never a problem again after that.”

Garland’s recommendation for people visiting the restaurant for the first time: the “Confit Duck Hash” ($19).

“It’s something you would never really see on a menu,” he said. “It has a lot of flavors.” Those flavors include five-spice duck, smoked corn puree, sweet potato, onion soubise, poached eggs and togarashi, a Japanese spice mixture.

When asked how difficult it is to manage two locations, Garland credited his team that he recruited from “all around the country.” He brought in a chef from Colorado, a friend from culinary school and a chef from Pennsylvania, and his front-of-house manager is a woman he worked with at his former resort in Florida. “[They’re] used to working at high-level resorts,” he said.

Garland said his goal was to bring a unique breakfast to Hot Springs.

“Not to say that there aren’t any great breakfast places here in town,” he said. “I just wanted to do something different, put a little twist on it. And it’s a very fun environment, an old-school-diner-feel with more modern plating. So yeah, I just wanted to try to make a mark on this community and try to help out as much as I can.”